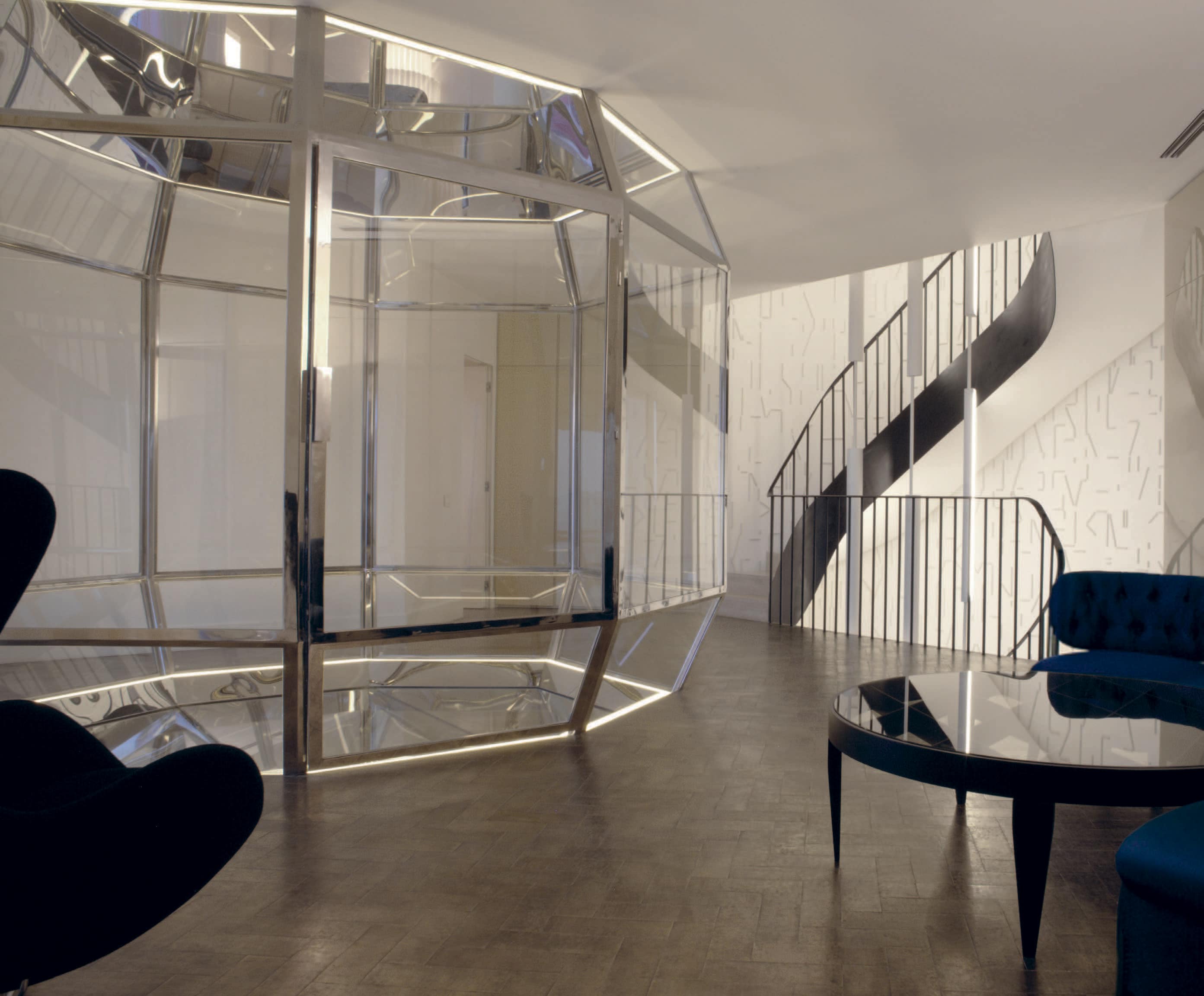 Who knows if the writer Marguerite Duras, who loved Vietnam, the former French colony, would have liked this house in Hanoi. A penthouse on the 25th, 26th and 27th floors of an exclusive tower facing the West Lake, between the two rivers, in the capital of this Southeast Asian country. Together with Saigon, the city has always been a crossroads of Indian and Chinese culture, and a place of extraordinary crafts based on an age-old tradition.

The project is by an Italian studio, which has had an international calling ever since its founding in 1993. Thanks to sensibility and talent, they have done over 140 major projects all over the world. We’re talking about CLS Architetti – Massimiliano Locatelli, Giovanna Cornelio, Annamaria Scevola, Davide Agrati – with one studio at San Paolo Converso in Milan and another in New York, a team of 53 collaborators and an approach that ranges from offices to products (the latter made in Italy).

The project shown here is particularly interesting because it combines two souls and two narrative levels in an authentic way, European taste and the highest levels of Vietnamese crafts. A design approach also seen in the Runway Vincom Center luxury store in Ho Chi Minh City, done in 2010, the studio’s first project in Vietnam, and a calling card of great prestige. Massimiliano Locatelli helps us to discover the ‘secrets’ of this recent project.

“We wanted to show what a home can be like in Vietnam, at a high level of buying power. The client is a daughter of the Prime Minister, a young, enlightened woman, active in politics and business, who left us complete freedom, telling us she didn’t want to enter the place until it was time to move in.

I must admit this was a very stimulating and fun project: an encounter between two worlds, in spite of the difficulty in controlling the local workers, who are great at finishings but very dodgy on construction, because they have no business sense. It was hard to make them understand our attention to detail, the time that goes into making things right. We wanted to use their hands, but with our heads. The construction took about a year and a half. We designed and produced all the furniture in Italy, which was shipped to be assembled, with a trusted carpenter, and finished on site by Vietnamese craftsmen found in long, patient research around the country.”

What is the heart of the project, in architectural terms?

“Undoubtedly the large glass prism with shiny steel borders that cuts across all the floors, becoming an element of continuity of the three levels, also crossed by zenithal light created by an opening in the roof on the upper level. It is a large ‘bubble of transparency’ that becomes a lantern at night thanks to the dimmered lights, offering a double perspective, inside and outside. In symbolic terms it represents the world, power, love. In the central level it becomes the Buddhist meditation room for the owner, who can thus remain in visual contact with the rest of the family. A gathering place. On the lower level there is a large chandelier, while the dining table is on the upper floor.”

Which materials of the local tradition have been reinterpreted with a contemporary internat ional language?

“Let’s start with lacquer, an inseparable part of local crafts, used to finish all the wardrobes. We discovered that the Vietnamese masters use a very long, complex technique. Making cuts in caoutchouc trunks, they obtain a black resin that is brushed onto the wood to seal it; next come 17 coats of lacquer, each with a phase of drying, to reach a certain thickness and to have a perfectly matte surface. Then the pieces are dipped in water to make then shiny; finally, they are polished with special paper. It takes three and a half months to make one piece. But the results are extraordinary, leading to soft, undulated effects and reflections, a precious quality perceptible to the naked eye. During our research we met artisans who still apply a technique passed down from generation to generation, from ancestors close to the imperial family of the Lý dynasty: after the third layer of lacquer a lotus blossom is inserted, attached with threads of gold and silver, and then covered with 14 more coats.

So we have reinterpreted this symbol of energy in different versions, designing it with the computer and putting it onto the lacquer, as in the tradition. It is interesting that the design surfaces over time, as the objects are used: the zones most often touched, such as the surfaces of the wardrobes, in this case, gradually lose the surface coats and get down to the essence. It was a way of introducing an essential concept: how beauty can be related to ageing as a value to be respected.”

There is also a lot of marble, as a preferred material of invention, as well as polished surfaces in beige Travertine for the floors…

“Yes, white marble, produced locally, from the clusters of the White Marble Mountains, in the zone of Da Nang at the center of the country, an equivalent of our quarries in Carrara. With this material we have made the door frames, the moldings of the windows, the baseboards.

All in stone, sculpted by hand, starting with the image of lace from a Prada dress the client loves, reworked in 3D with the computer, at different depths, to allow a master stone carver to make unique pieces, each one meter long, for an effect of great lightness.

Stone has also been used in the bathrooms, where sheets of marble carved by hand reproduce the scales of the skin of a dragon, the oriental symbol of good luck and power. In another bathroom we have used black slate (not local) to carve a Vietnamese fable on the walls, written on the computer and copied by hand, which emerges in a pale hue against the dark background. Writing returns on the internal staircase, with a work by Alexander May, who has ‘pierced’ the walls with white marble sticks to compose a fragmented text-tribute.”

“There’s the real bamboo of the terrace, in the creative installation by the American artists Doug and Mike Starn: a structure-sculpture. And there is virtual bamboo in the guest bath, where we have put a series of canes on the floor, photographed in black and white and entrusted to incredible craftsmen to represent them in the stone.”

As a presence, another recurring material is bronze…

“Bronze is used for the large screen that divides the kitchen from the dining area; treated as lace, it incorporates threads of silver and copper, thanks to the knowhow of a foundry in the Hue region specializing in the construction of temples and places of worship. But as a whole, the research was more extensive: it also involves the roots of trees used as washstands, or the white porcelain of the ‘books’ entirely covering the walls of one bathroom.”

How important are furnishings and art in the overall sett ing?

“They complete the work. We have filled the domestic landscape with selected furnishings from all over the world. There is a piece by Gaetano Pesce for Meritalia, revisited, as well as a table by Emmanuel Babled in plexiglas, a series of P40 armchairs by Osvaldo Borsani for Tecno covered with special fabrics inspired by the robes of Buddhist monks, in silk velvet and cashmere, by Loro Piana.

Everything has been carefully arranged to establish a dialogue with the belvedere windows overlooking the lake, and to be easily reconfigured depending on more public or private usage requirements. The table in cast bronze I have designed takes on different configurations: it can be a side table, a console, a dining table when the pieces are joined, but it will never be a fixed table. It reproduces the West Lake in the middle of the living area… the matrix behind the product design project, presented at Galleria Nilufar in Milan. As for art, it becomes a fundamental factor in the representation of a union of cultures.

Together with the client, we have identified the protagonists of a research still in progress. For example, Julian Schnabel is making a portrait with broken crockery, Vik Muniz is done a series with tea leaves, Candida Höfer has done the photographs for the library.”

How far has the design delved into details?

“We have thought about everything, from the coat hangars to the sheets, the dishes to the glasses. Everything is customized and suited to the needs of a kind of everyday use that differs from ours. One curiosity: the sheets were all made in Italy and embroidered in Vietnam. The embroidery on silk of the women of Hanoi is widely loved, also in Europe, by the luxury fashion brands. These works enhance an entire wall behind the double bed, and decorate a sofa with a retro look (a model that belonged to the royal family) with specially selected floral motifs. We made paper patterns based on a super-precise drawing, entrusted to highly skilled hands for perfectly detailed execution.”

The large glass prism with borders in polished steel that cuts across the floors becomes an element of continuity of the three levels of the house, and a source of zenithal lighting. In the central level, it forms a Buddhist meditation room and a belvedere for the view of West Lake. Egg Chair by Arne Jacobsen (1958) for Fritz Hansen in black leather.
In the living area on the lower level, communicating with the entrance (concealed by full-height lacquer wardrobes), the glass prism (in the drawing, an exploded axonometric) appears as a large chandelier. On the polished beige Travertine surfaces of the floor, the P40 armchairs and the table by Osvaldo Borsani for Tecno stand out, near the West Lake bronze tables designed by Massimiliano Locatelli for the house.
In the photo: table by Emmanuel Babled in plexiglas, Montanara armchair by Gaetano Pesce for Meritalia, Mamava seat by Andrea Salvetti in cast aluminium, applique by Carlo Scarpa for Venini.
A portal in local white marble, sculpted by hand based on a computer-generated design, leading to two zones of the living area. In the photo: the Less table by Jean Nouvel for Molteni & C, a custom bookcase, the Giraffa lamp by Angelo Brotto.
View of the large ‘bubble of transparency’ that forms the heart of the architectural design, on the 26th floor of the penthouse, functioning as a circulation node for the bedrooms and baths. Rosalinda table by Gio Ponti and armchairs by Otto Schultz (1940) in blue silk velvet, produced by Boet.
Plans of the three levels
The master suite with the wall behind the bed enhanced by silk embroideries by the women of Hanoi, based on a design by the architects representing the fish of West Lake.
View of the bath clad in glossy brown lacquer and Travertine; the two washstands were hollowed from two blocks of stone. Fifties mirrors from the Seguso collection.
The experimentation with white porcelain for the ‘books’ that cover the walls of a bathroom, accompanied by the artistic research of Alexander May, who has ‘pierced’ the walls of the internal staircase with white marble sticks, composing a fragmented text-tribute.
In the stairwell, three large adjustable cylinder lamps, custom made. In the foreground, the Raffles sofa by De Padova in blue cashmere from Loro Piana and a vintage table by Fornasetti.
The terrace with the structure-sculpture in bamboo by the American artists Doug and Mike Starn. Custom divan in iron and black fabric, chairs by Harry Bertoia for Knoll International. The stool has been made with the root of a Vietnamese plant.
#Design #Projects