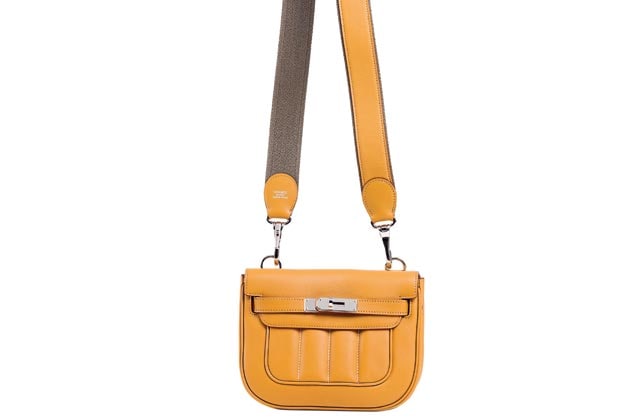 Allure, verve, space… that is what we love about American westerns,” said Émile-Maurice Hermès, grandson of the founder. Now that the quadruped has been replaced by ecological bicycles and spaces have become much more dense, the image of the ‘field’ could also be filmed like this: a woman rides down Via Montenapoleone on a bicycle; she is wearing a Milano yellow silk carré, and her exclusive city bike has the same color; almost that of her handbag, a Kelly, of course.   She stops in front of number 12. Another shot. The city changes, to Los Angeles, 434 North Rodeo Drive, another actress (though the great testimonials like Lauren Bacall, Greta Garbo and Marlene Dietrich, loyal customers of the maison, are no longer on the scene) and a different color – blue – for the objects and the bag (this time it’s a Birkin). This scene has practically the same atmosphere, of whispered elegance. As if the boutique at 24 Rue du Faubourg- Saint-Honoré in the Ville Lumière, the iconic headquarters of Hermès since 1880, had been magically replicated in the heart of Milan (in October) and Los Angeles (September).   But repetita iuvant, always and only with a leap forward. Also because keeping faith with a French taste that is synonymous with craftsmanship, innovation, an aesthetic sense of products, cannot help but interpret the spirit of the host city. And then because, since 1837, from the origins as a saddlery to the present, under the guidance of Patrick Thomas and Axel Dumas (the sixth generation of the family), Hermès continues to make progress around the world.   ““The maison operates in 51 countries. And every boutique stands out for its discreet respect for the genius loci,” Denis Montel of studio RDAI (Rena Dumas Architecture Intérieure), art director for the design of all the points of sale in the world, explains. “In the new ‘home’ in Milan, the only European opening in 2013, the leitmotiv is color derived from the Habsburg period, Schönbrunn yellow, which Maria Theresa wanted for architecture in Milan in the second half of the 1700s.” A particular saffron stucco hue that attenuated the severity of historic estates, and lights up the facade of a fine neo-classical building with an internal courtyard.   “This is the feature with which we pay homage to the city,” Montel continues, “its suggestions and its history, also in the interiors, featuring a series of special products, iconic pieces and new classics, made for this opening precisely in ‘Milan yellow’ and available only in this city. With respect to the first boutique on Via Sant’Andrea, opened 26 years ago, we have doubled the area of the store: ample spaces, 600 m2 distributed on two levels (over 600 other square meters are set aside for offices), with lots of light thanks to four streetfront windows and the arched windows facing the internal court. All this has given us a chance to narrate the great variety of the 16 trades of the maison.”   Meaning the display of 16 product types, with handbags and luggage, agendas and small leather goods, saddlery, silk, men’s and women’s prêt-à-porter, jewelry, watches, belts, gloves, footwear, hats, costume jewelry enamels and accessories, fragrances, arts de la table, art de vivre, as well as the recent collections of furnishings, fabrics and wallpapers. The spatial layout of the store follows a classic scheme: the main entrance, the discreet ex-libris just past the threshold, an orthogonal axis of reference and, at the sides, the rhythm of fluid, spacious narrative episodes, alternating with more intimate, private corners.   The staircase leading to the first floor, here as in Los Angeles, is the protagonist of the set. In its enveloping design – facing a neutral, clear enclosure featuring Venetian terrazzo floors, enhanced by amber-color Saint-Louis crystals, with stucco finish on the walls – it conveys the savoir-faire of a curved handrail covered in leather: the tailor-made skill of an architectural detail that reflects the value of the fine materials and designs of the silk and leather products on display.   As the only punctuation of all the zones, works of art belonging to the Hermès Collection of Contemporary Photography and the Émile Hermès Collection. The partnership with art is a constant in all the company’s stores around the world. As is the design concept by RDAI/Denis Montel that adapts to the specificities of the context, as seen in the flagship store in Los Angeles, opened in 1997 and reopened this summer, after a radical renovation.   “The tribute to Beverly Hills and its lifestyle,” Montel explains, “corresponds to a retail area that is four times as large, now 912 m2 (plus 300 for stockrooms and offices), obtained thanks to the possibility of adding one level (the fourth) to a building with great personality and charm on Rodeo Drive.   A pure sign that communicates tactful solidity, but also the precious glow of materials. The facade of the building, a rectangular box, has been restored to a classical, symmetrical design, with a reflecting surface in white Carrara marble punctuated by deep openings for recessed windows that filter, like blinds, the sun of Southern California, producing a dynamic play of lights and shadows.   The emptied volume of the entrance lobby comes a monolith of light, crossing all four levels up to the flat glazed roof. A sculptural vortex, underlined by the figure of the white staircase in marble and Venetian stucco.”   In the background, suggestive motifs are intertwined by floors in blue mosaic tile, evoking the movement of the waves of the nearby ocean. Here the limited-edition collection of Hermès products to celebrate the new opening has been made in the color blue. Like the case for wine glasses, covered in leather, a tribute to the wines of California, or the hand-stitched basketball, in honor of a sport that is a true passion in this city.