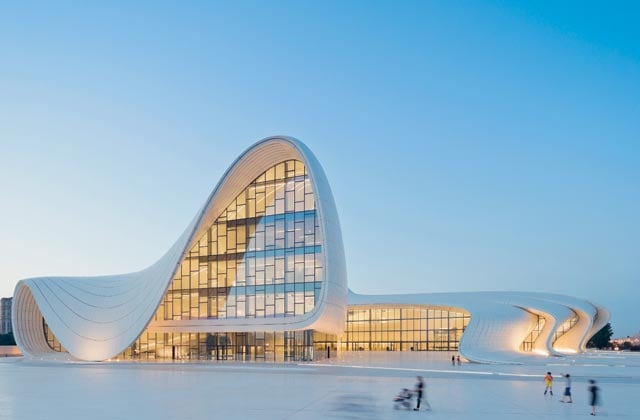 The energy field that has risen over the ashes of an abandoned Soviet-era factory, surrounded by low-cost housing, overlooks the landscape from the top of a hill.

The Heydar Aliyev Cultural Centre, dedicated by the president of Azerbaijan Ilham Aliyev to his father, Heydar, is very evocative architecture, of great visual impact. Not just because with its 100,000 plus square meters it becomes a major landmark for the city of Baku. Its fluid, continuous spatial form, like a Moebius strip, interprets the natural topography, and from the pacing of the building to match its individual functions – library, museum for state collections, a conference center with auditorium, a restaurant – it becomes a symbol of the modernity of a new political-economic-cultural path for the capital city, a place of knowledge open to circulation and sharing of information. Credit goes to the project created by Zaha Hadid, with Patrik Schumacher and the architect Saffet Kaya Bekiroglu, who have interpreted this work as the possibility to erect a democratic work of architecture, free of rhetoric and monumentality, enclosed bulk and rigidity. Not hampered by pre-set paradigms. Capable, that is, of configuring the fundamental features of a public space of relation, open to the city, extending outward in a park with an artificial lake, combining an outdoor cafe with a scenic itinerary of terraced pools, flights of steps, ramps, escalators and elevators connecting to the underground parking area. “We wanted to bring emotion into the context and to enhance it, suggesting an ongoing relationship between the inside and the outside of the building, public and private, architecture and landscape, so visitors would feel metaphorically welcomed with an embrace,” Hadid explains. The design is guided by a parametric matrix: technical-formal research based on genetic algorithms and the idea that all the key processes of the design should be driven by variation and correlation of the architectural parts – seen as modules, in terms of position, geometry and material – shaping them to adapt to the context. Specifically, the digital volumetric and spatial manipulations conceived to make use of the facility precise and effective have brought all the functions of the center and the entrances to a high level of performance and density of a single continuous surface in polyester reinforced with fiberglass (the material also used for the internal flooring and facings) that connects every spatial episode, while also granting each its own identity. Sinuous and dynamic, like a scarf moved by the wind, this ‘skin’ extends beyond the concrete foundations of the building, folding and bending with its external skin, then turning to transform into a connective feature of the internal landscape. But it does this in a way that is totally independent of the internal structure on which it rests. The building is totally enclosed by a steel space frame with a free form (designed and produced in Germany) that incorporates, together with the continuous glass facade system, all the vertical load-bearing members, which are totally invisible inside. In the three-dimensional space thus formed the spine of the project is the monumental entrance – beyond the white concrete plaza outside – the joint of access to the main areas of the building: the ground floor with the entrance lobby and the large hall for conferences and concerts (1000 seats), entirely clad in oak, on the south side; the museum, library and exhibition spaces, organized on eight levels, to the north. The continuity of the forms, materials and colors, with the reflections of the light, accentuates the sensation of an absence of points of reference. Because the white floors that continue up the walls to total white ceilings set a suspended gravitational tone, made of liquid, flowing spatial sequences, where voids becoming intrinsic portions, offering different glimpses, perspectives and vanishing points from every angle.