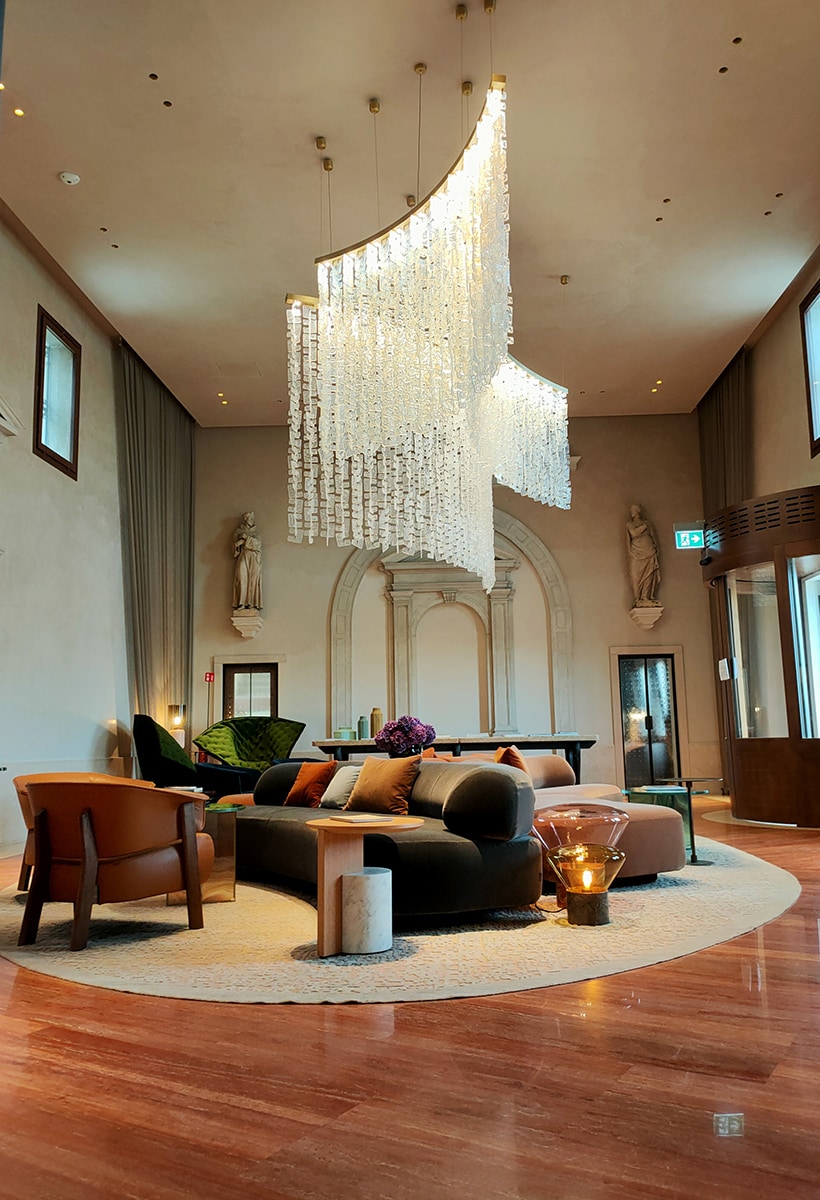 In the new hotel designed by Patricia Urquiola in Venice in the Arsenale area, luxury is hyper-personalized, off the beaten track

For a year and a half we have been discussing how the way of living has changed, but how much the way of hosting has changed? What is luxury today? Does it still make sense to talk about luxury when it has become an overused, worn-out term that means everything and nothing?

It is precisely the restrictions on travel that made us understand, or rather, feel, the importance - and the joy - of the journey, intended as a Grand Tour of ancient memory but also as a simple trip outside the city. Luxury - always - is in the services offered, in the attention exclusive - understood as personal - confidential. Perhaps now it is only more evident and tangible: it is the details that stand out, the decorative ones and the experiential ones.

Yes, because now those that are proposed, even revealed, are itineraries unknown to most, out of the beaten tourist flows. All the more so if you are in Venice, where the studio of Patricia Urquiola oversaw the interior design project for Ca' di Dio, the new hotel five stars of the collection VRetreats located in the Arsenale area, elegantly away from Piazza San Marco. 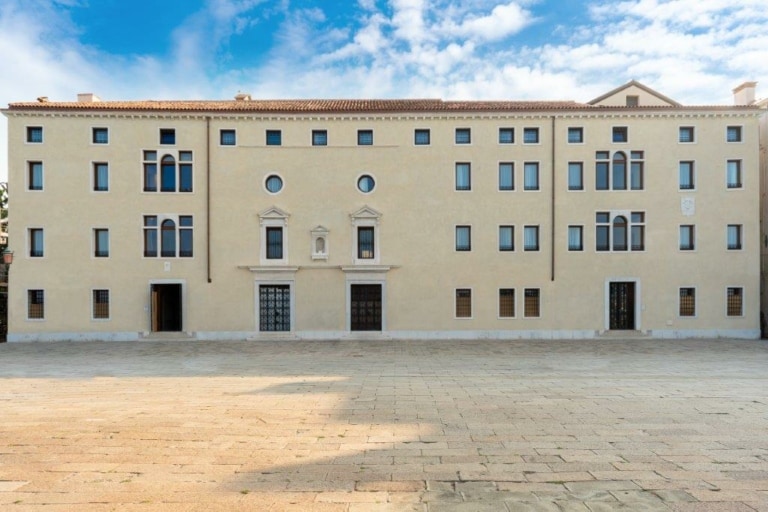 The facade of the Ca 'di Dio hotel in Venice

Located along the Riva degli Schiavoni, near the Arsenale, an ancient complex of shipyards and workshops, today the hub of the Biennali d'art and architecture , Ca' di Dio, subjected to a huge restoration and redevelopment project, presents a new look in which its two souls converge: the rigor of the intervention in the 16th century by the architect Jacopo Sansovino on the original nucleus of the 13th century , when the complex hosted pilgrims traveling first and for women in difficulty then, and the traditional refinement of a Venetian residence with attention to flawless detail.

With rational and clean lines, the facade in Istrian stone, repainted in a sober and elegant neutral shade that changes gradation as it changes of light during the day, introduces a building dotted with 442 windows that maintains the original configuration structured in living cells. In total respect of the pre-existing, “the project of i nterior design accompanies, the furnishings recline” explains Patricia Urquiola. 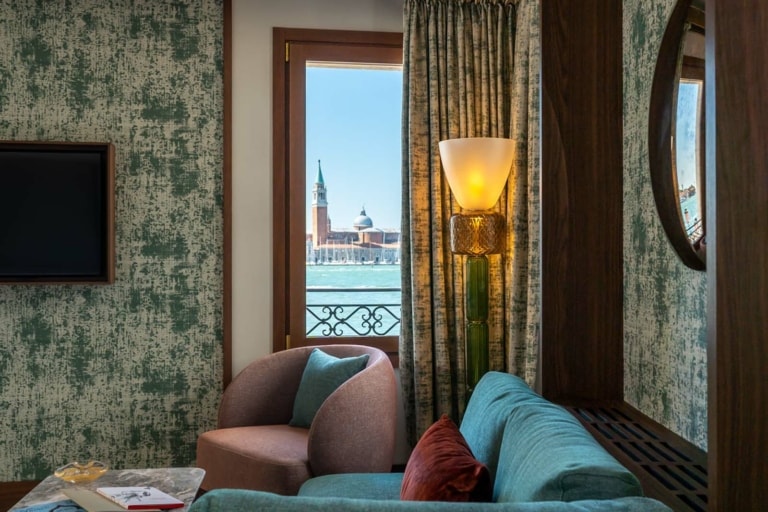 The essence of Venetian style

The connection to fabric of the city, with its splendor, stuccoes and decorations and at the same time its heritage, that of know-how and workers famous all over the world, it emerges in the texture of the fabrics, in the Murano glass, in the textile boiseries, in the soft finishes and in the aquatic colors that emphasize a sumptuous elegance, declined according to the (highly recognizable) contemporary stylistic code of the Spanish designer. What is returned is the essence of Venetian style: the General Manager of Ca' di Dio Christophe Mercier defines it as “ Venessentia”. What we want to tell is a r different account of Venice. 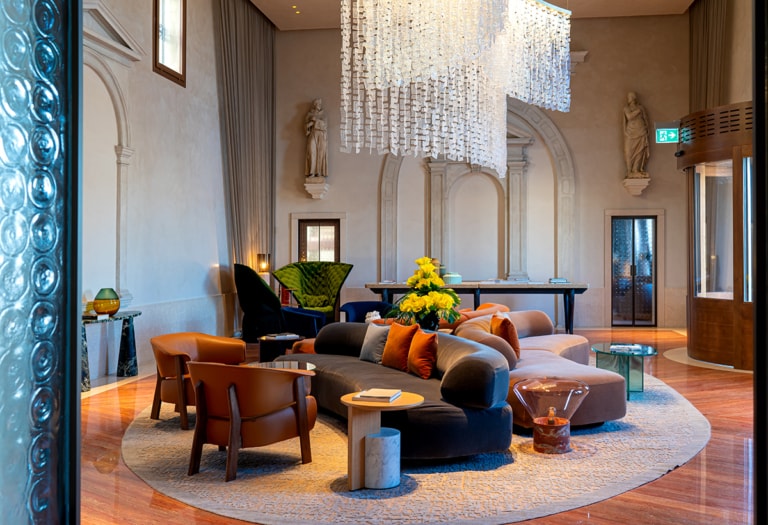 The lobby of the Ca 'di Dio hotel

A Venetian residence with water gates, courtyards and roof terraces

Thus was born a 'severe' hotel, with a powerful sobriety, spread over 4,000 square meters on 3 floors, which is at the same time a Venetian residence with three courtyards used as gardens configured like traditional houses and two Altana, typical Venetian 'terraces'. shape of a turret placed above the roofs, with a privileged view of the lagoon and in particular of the island of San Giorgio Maggiore. A hotel that boasts a direct docking of boats on Rio Ca' di Dio, for an entrance of other times, and unfolds in reserved and welcoming, intimate and enveloping environments, away from the most crowded tourist areas, where you can breathe the soul creative and cultural heritage of Venice. From the water gates passing through the garden courtyards to the roof terraces: there is all the Venetian style in the rigor of Ca' di Dio. 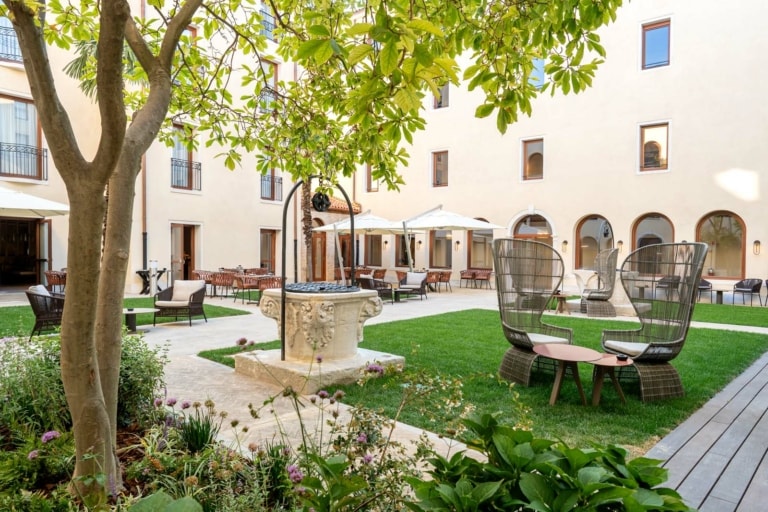 True luxury today is hyper customization: a welcome that is so domestic, enveloping, even sumptuous - just as you would expect from a Venetian residence - how discreet and reserved, under the banner of private experiences tailor-made, to discover itineraries and characteristic places unknown to most, alternative to the more traditional and chaotic tourist flows. What Ca 'di Dio proposes is not a canonical and explicit luxury, but a luxury (not luxury) interwoven with details, attention and care: welcoming gestures. 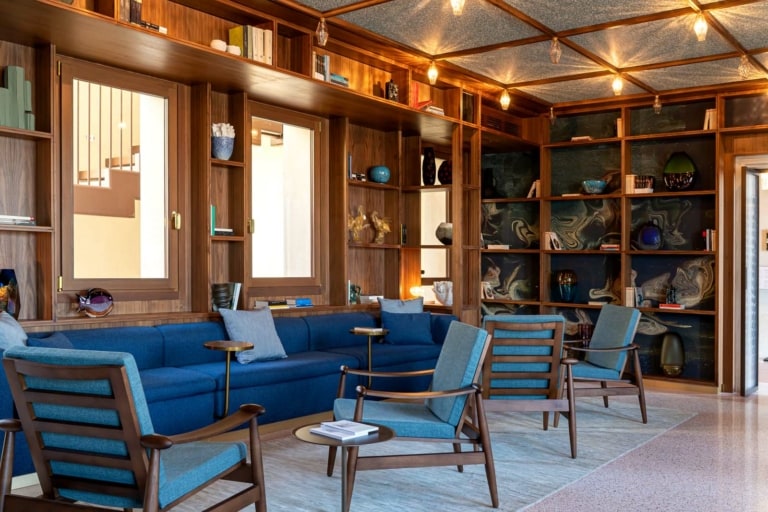 The true luxury are the secrets

To get to know the true soul of a city, you have to visit / explore it with someone who was born there and knows its most picturesque and authentic places and its most unexpected and secret aspects. A Ca 'di Dio i Guest Assistant propose tailor-made experiences and itineraries such as a tour in the Venetian calli or a journey to discover of Murano, Burano or Torcello. 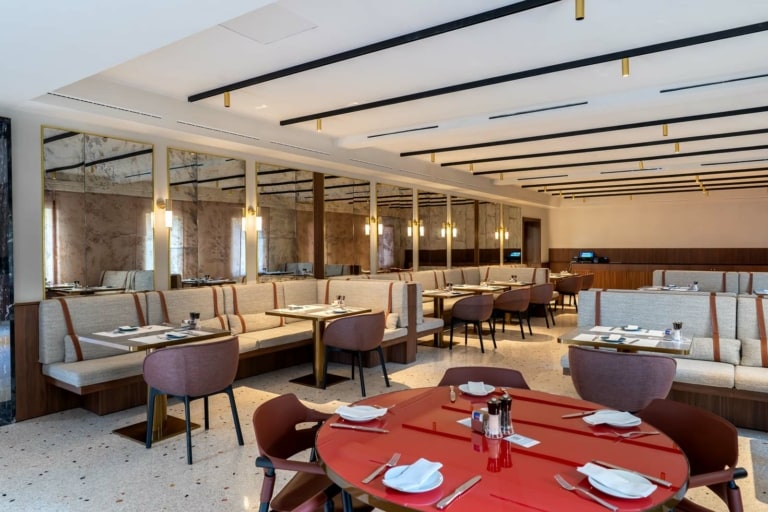 The Essenza restaurant of the Ca 'di Dio hotel

Magic in every corner of Venice

Venice, as we know, is a magical, fascinating and disturbing city, which hides corners of beauty and mystery everywhere. For those who do not want to walk randomly through narrow alleys, canals and squares 'minor', option always valid to breathe the essence of a place, there are Guest Experience Specialists at guests' disposal to guide them to discover the historical, artistic and cultural secrets of the city. Because Venice knows how to amaze and excite always , in an incredibly intense way - every single time - even those who have visited it many times.

Another surprise that Ca 'di Dio gives its guests are the postcards with curious vintage photos that date back to a period ranging from the 1940s to today. Coming from Camera Photo Epoche's archive of Venetian photojournalistic negatives, they show funny situations but above all a new and unknown Venice: the mirror of a real and active, lively and proactive city. For framing. 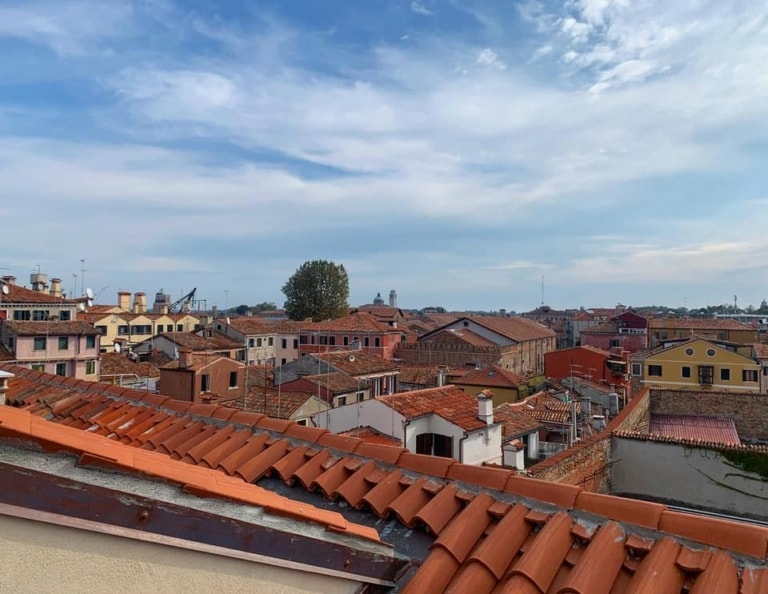 Started in 2019, the restructuring project, carried out during the months of the pandemic, not without difficulty but with great determination by the Alpitour Group, which invested overall 5 million euro , including the entire building that today houses 66 rooms, including 57 Junior Suites , two restaurants, Essential and Vero, a bar, Alchemia, a wellness & amp; spa area, even a reading room, to the three characteristic courtyards, two gardens and a vegetable garden, and the two roof terraces. The redevelopment intervention also emphasized sustainability, with investments to equip the structure with systems and infrastructures capable of limit the environmental impact. 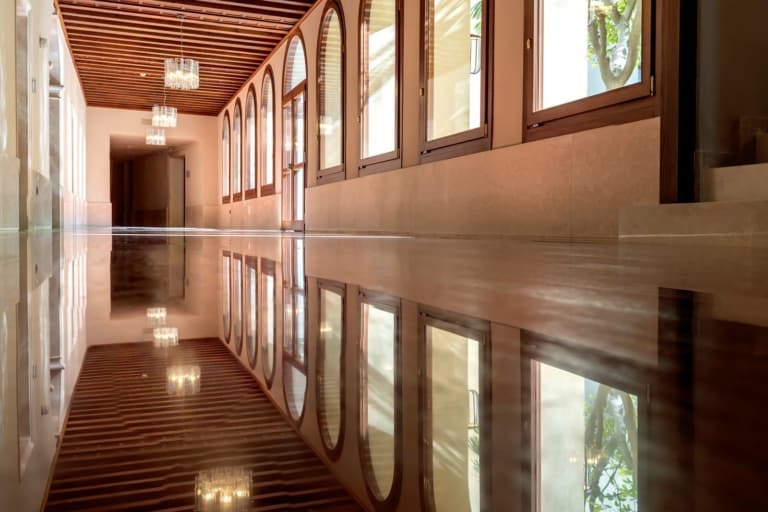 The materials and the heritage

The idea of ​​contrasting and at the same time combining the Venice of the sconte, the hidden calle made of old bricks, to the Venice of noble palaces of marble and decorations. The choice of materials representative of the city and its tradition, such as glass, wood, wrought iron, stone and marble, marks the link with the territory. And, essential, the Venetian floor. Many architectural and furnishing elements that have been recovered and maintained, such as the two wells in the main courtyard, the bricks laid in a herringbone pattern that trace the paths, but also a table and even the iron and fuchsia glass handles of the common bathrooms.

The atmosphere of the common areas covered in travertine is made sober and soft by the choice of furnishings with sinuous lines covered with fine finishes, iridescent fabrics and soft nuances lit by more intense colors, such as the peach that degrades into powder pink, terracotta into brick, bottle green into titanium gray, blue into teal and light blue and all the shades fluid that recall in the shades, the transparencies and reflections of the lagoon. Tactile colors, chromatic counterpoints, satin finishes, opaque shades and trowelled mortars, to give back a ’sophisticated and velvety atmosphere. 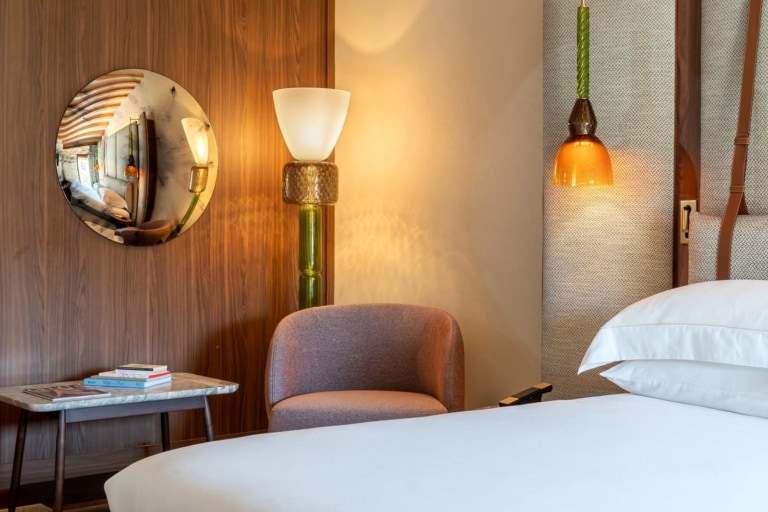 Many design companies involved in the project, starting with Molteni&C Contract Division which custom-made all the furnishings of the bedrooms and living rooms of the suites. The indoor and outdoor environments are furnished with furniture, upholstery and accessories by Acerbis, Agape Casa, B&B Italia, B Italia, Cassina, Glas Italia, Kartell, Kettal, Moroso, Olivari , Midj , Pulpo , Salviati, Varaschin, Very Wood, bathroom furniture by Cielo, Fantini, Duravit, Geberit, up to the lighting by Brokis, Flos, Il Fanale, Olivari, Oluce . Recurring theme: the lantern, both with original elements by Venini, and revisited with a contemporary key. 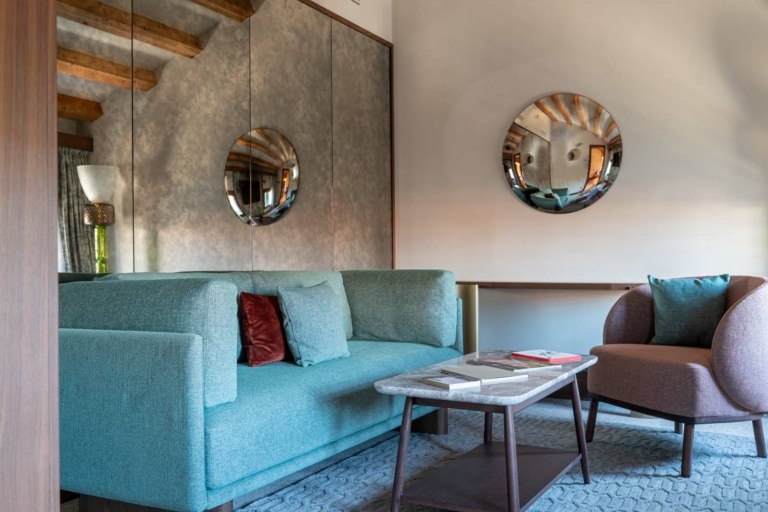 Even the ceilings deserve a mention for the care reserved: original coffered or dotted with small lights in Murano glass stand out for their originality. The spectacular wallpaper that covers the ' large ceiling of the Vero restaurant, designed by Patricia Urquiola inspired by the fish and vegetables of the lagoon, was made custom by Jannelli & amp; Volpi . The fabrics, whose textures are reminiscent of imperfect brocade workmanship, as if time had imprinted its signs , are by Dedar, Kvadrat and Rubelli, the Warli rugs; the finishes, the marmorinos, the stuccos, the glazes and the slabs come from the skilful work of La Calce del Brenta. 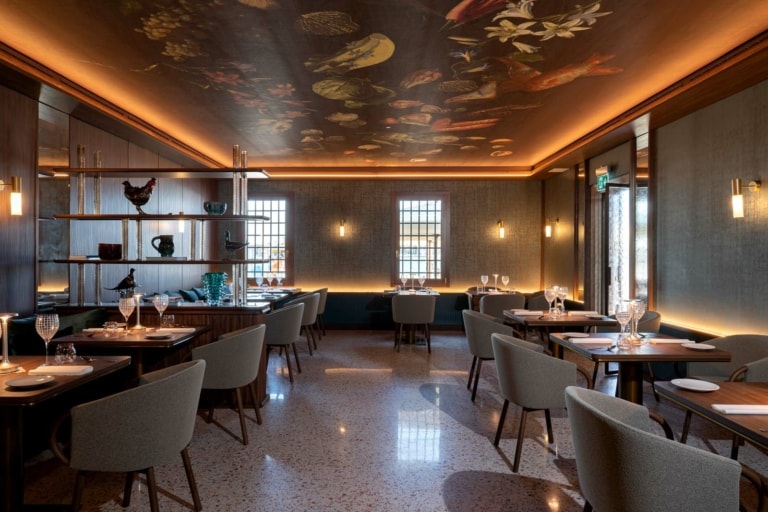 Symbol of Venice, the Murano glass could not be missing, produced by the glass masters in the historic LP Murano Glass Factory , used to create vases, decorative objects, furnishing accessories and for the spectacular chandelier with dynamic lines, born from the intersection of three light volumes that reflect the sinuous shapes of the seats below. Three sails composed of 14,000 crystals in Murano glass float in the center of the double-height lobby, a special and evocative place: from an ancient church it now houses a contemporary living room, used for passage but at the same time open to conviviality. 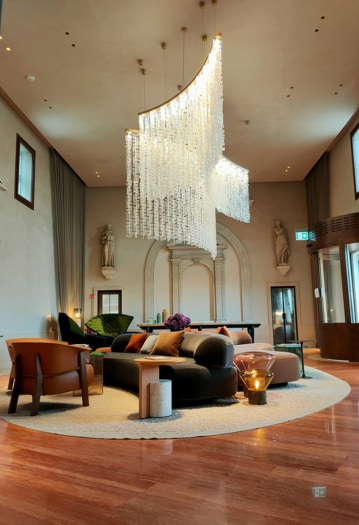 The lobby of the Ca 'di Dio hotel

The rooms (with view)

The rigor and respect for the architectural project capable of preserving the original structure of the ancient residence is reflected in the rooms maintained in their original structure cells, each one different from the other. Obtained from ancient lodgings reserved for traveling pilgrims, the and rooms and suites are set up with design elements that refer to the Venetian tradition. The furniture with simple and rounded contemporary lines conceal refined and functional details: some are designed by Urquiola herself for famous design companies, others customized ad hoc for l'hotel, still others were built to a design by local worker. 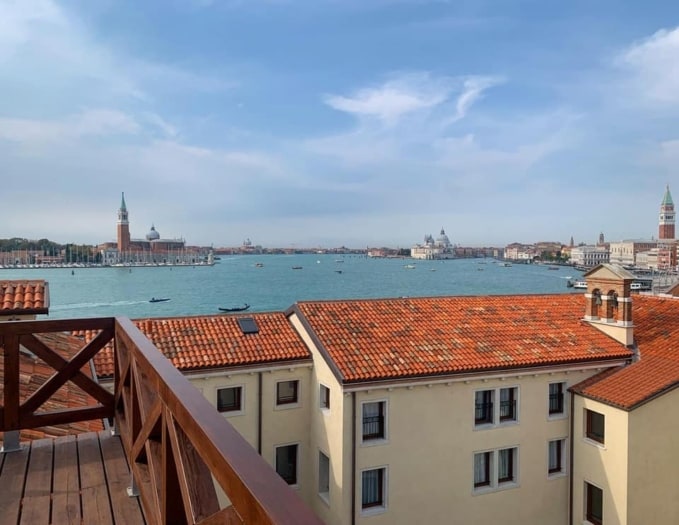 View of Venice and the lagoon from the Altana Suite

The refined textile boiserie that frame and equip the large (and very comfortable) bed, the wooden frames, the matt marbles, the antiqued mirrors, the fabrics and the soft velvet in vivid shades that covers the seats. Windows and terraces frame glimpses of the lagoon: the ’ aura of Venice hovers in a sort of embrace. 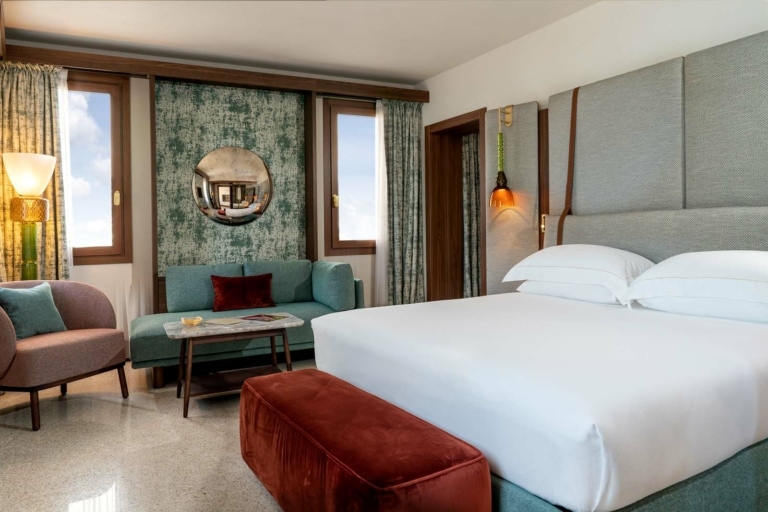 Lagoon View Suite of Ca 'di Dio in Venice. All the furnishings of the rooms and the living rooms of the suites were made by Molteni&C

Hotels for lovers of Italian culture

VRetreats, hotel division of VOIhotels, brand of Alpitour Group, is the new luxury collection of structures with a distinctive personality and a strong international vocation, dedicated to lovers of art, history and culture made in Italy. It was born for to redesign the same concept of luxury, no longer an end in itself, but as an access key with unconventional (technologically advanced) methods to the attractions of our country, those less known and (therefore) more precious. 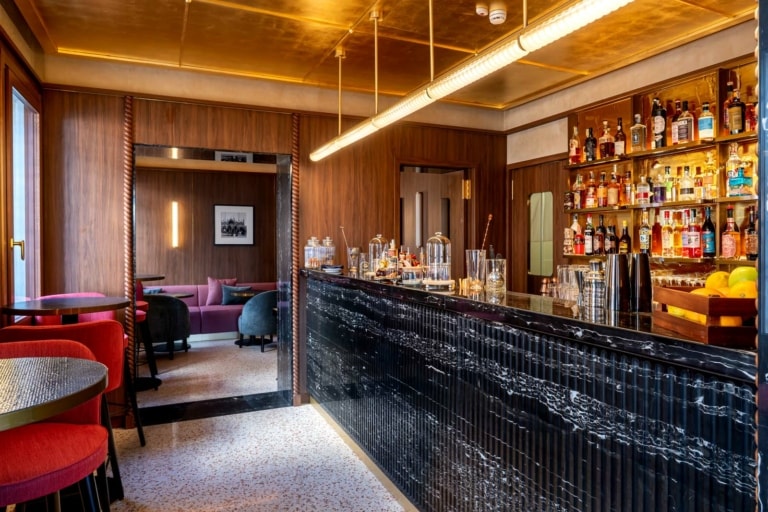