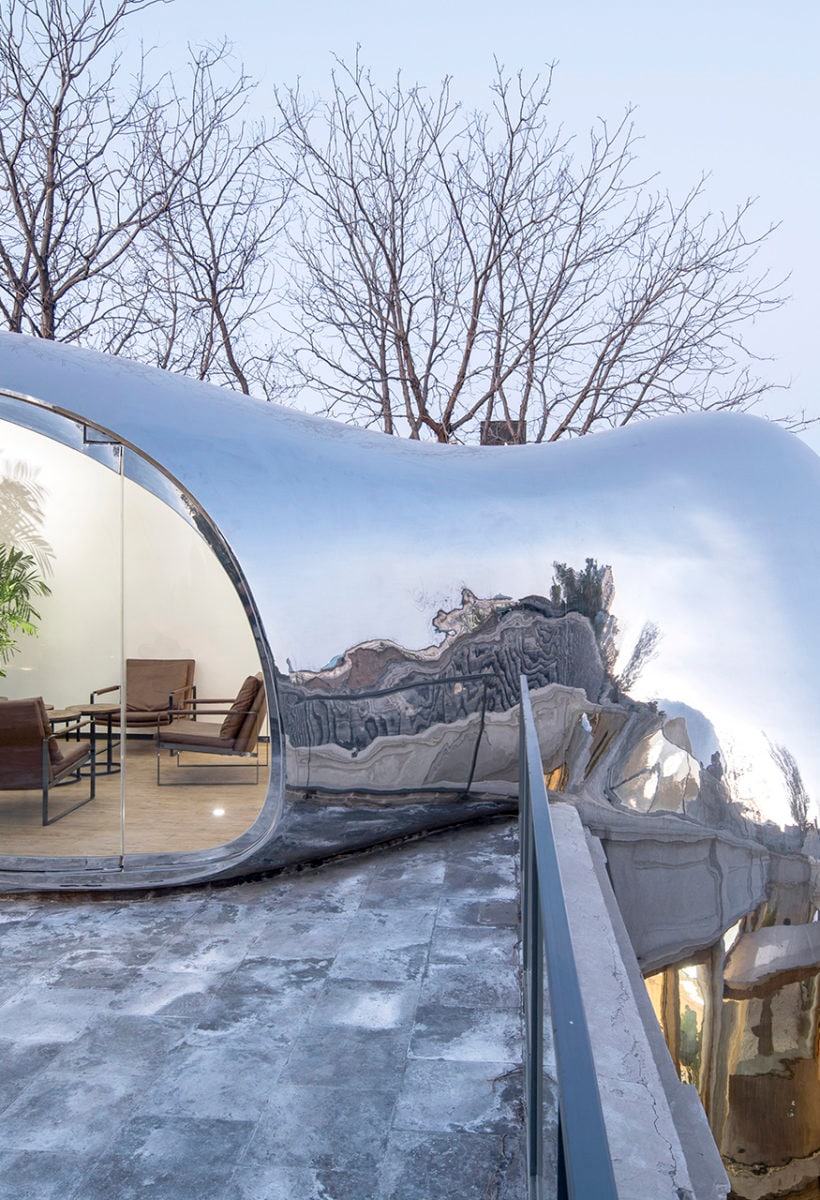 In Beijing, China, the striking forms of the ‘bubbles’ designed by MAD Architects (2015-2019) update the courtyard architecture of a traditional hutong, seeking a new balance between history and the present of a place, a landscape and a community

To critically analyze a project one has to get beyond disciplinary barricades and geographical, cultural affinities, going beyond the form, beyond the very image, like an archaeologist, to discover the often hidden secrets of an act of composition.

MAD Architects lend themselves to this stimulating process precisely because it is easy to see that their work is never a formal exercise. As is often the case, both for rigid shapes and fluid architectural lines. Stylistic servitude always kills poetry, preventing the surfacing of a ‘design culture’ that is complex in its contemporary character, but with simple and democratic responses that allow the observer to also become an actor in the space.

At Hutong Bubble and in the many achievements and projects of MAD in general, if we get past the initial aesthetic surprise and the wonder that emerges in the image-observer relationship, in the subjective interface with what we see, we can easily glimpse that in their way of thinking about design there is no such thing as a difference of scale.

Every one of their works, like the one published here, is subtly based on interdisciplinary research in which art, architecture, design, environment and – above all – nature blend together, without barriers, underlining a contemporary attitude that is open only to creativity, whatever and wherever it may be.

Hutong Bubble, more than other projects, expresses and sums up this research precisely thanks to its way of coming to terms with tradition, magically becoming innovation and the near future. This project echoes with the words of Martin Heidegger, when he wrote that the project is “the synthesis of past, present and future,” precisely because the successive chapters of an age-old narrative are materialized in this work. A work of architecture, in which every tradition, at the time of its conception, has to be an element of modernity.

It is clear that in this project there is no distinction between the terms contemporary and tradition, treated as synonyms for a single concept that is only shifted in time. But where the Hutong Bubble is concerned, there are two other keys of interpretation that can also be important for an understanding of the entire cultural path taken by MAD: the ongoing pursuit of a symbiotic relationship between man, shelter, space that hosts people and nature, above all in the oriental sense of that rapport.

As well as the willingness to leave interpretation up to the observer, seeing the possible aspects of the architecture in terms of the historical moment, and the viewer’s own culture and sensibilities, above all with reference to geographical belonging. It is obvious that “simultaneous contrast,” as Bruno Munari defines the first law of creative interdisciplinary composition, is the true vector of these two keys of interpretation. The “simultaneous contrast” of forms, as in the Hutong Bubble project, in which an organic form is inserted inside a “simple and regular space,” allowing the observer to break free of his background and to sense the spaces as infinitely open to interpretation, never permanently static.

The “simultaneous contrast” of steel inside a traditional courtyard, of fluid forms that especially on the roof become lofty citations, suggesting the “objects of poetic reaction” of Le Corbusier, makes it possible to eliminate the thresholds between inside and outside, nature and artifice. The “contrast,” above all, opens the doors to understanding of a project with simple forms based on complex ideas.

This might just sum up the newness of MAD; in this very democratic possibility of leaving aesthetic choices up to the viewer. In the end, though in secret, Borromini did the same thing, freeing imagination from rigid Baroque practices, thanks to the eyes of the observer… and thus still remaining forcefully contemporary.