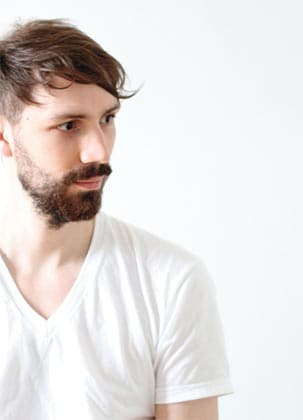 Forms that seem to rebel against their geometric construction, with a thrust that animates inanimate objects.

This is the design twist of the young French talent Benjamin Graindorge, selected by VIA and brought into the international spotlight by the Parisian gallery Ymer&Malta in 2011. For the gallery, he has made five pieces on the theme of dreams, focusing on the expressive qualities of materials. His references are often to the natural world, such as dew crystallized in a glass lamp, or 3D topographical curves on the surface of a table, or adapting in the bends of a seat. Signs, symbolic connections, made abstract by a shift of scale and by taking them out of context. When describing his products, Graindorge often uses the word ‘landscape’, underlining the fact that they are microcosms of relation between user and object, osmotic passages between nature and artifice. Likewise, the choice of materials, from multicolored Corian to upholstery, wood to ceramics to glass, lets him transfigure visual references and give the user a surprise effect, with a wee bit of disorientation. An almost Dada touch that has made Graindorge’s design attuned with the objects produced by the French company Moustache, with which he has started to work. “Contamination is the essence of design – he says – because the designer does not create, he assembles things that already exist. To get closer to life, to delicacy, to all that is human”.