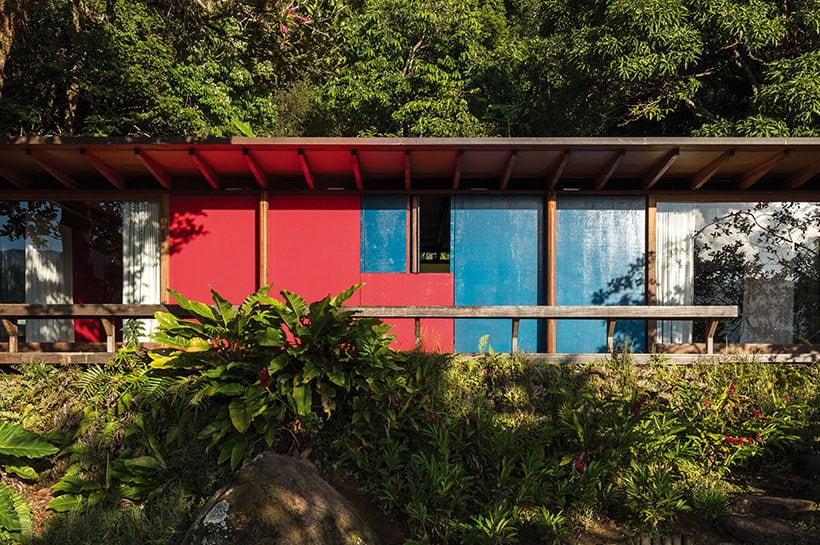 A house-landscape conceived as a cabana perfectly inserted in the burgeoning natural beauty of Paraty in Brazil. A project by Thiago Bernardes, in the footsteps of a Cariocan family tradition

Reached only by sea (weather permitting), this weekend getaway is in an earthly paradise near the city of Paraty, the southernmost town of the state of Rio de Janeiro, a gem on the green coast of Brazil.

Thiago Bernardes has envisioned and designed it in his own image, like a cabana on a human scale, a pearl amidst pearls, basing it on the model of a fisherman’s house. The architectural artifact was made with prefabrication in a span of just 15 days, with the idea of minimizing impact on the tropical forest.

The dense vegetation that envelops it, independent from the other two houses that belong to the same parcel of volcanic stone and wild nature extending to the crystal waters of the sea, immediately indicates the striking landscape as the paradigm of reference for the project.

Thiago Bernardes, born in 1974, with offices in Rio de Janeiro, São Paulo and Lisbon, has absorbed a sense of absolute respect for the context from his family background: his father Cláudio, who died prematurely, and his grandfather Sergio made sensitivity to the environment and local constructive traditions the creative sources for inimitable modernist works (often on the water) in a South American language.

Bernardes conserves the memory of this signature approach, which is like a banner: his Brazilian architecture combines erudite citations with humble materials, primitive references and color. Never overstepping its role, never too much. Le Corbusier, regarding his Cabanon at Roquebrune-Cap-Martin, in France, said that “a man on holiday needs nothing but a bed, a toilet, a roof over his head and the sunset reflecting on the sea.”

Thiago’s interpretation of existenz minimum traces back to the idea of a simple, sophisticated box, defined by an irregular but archetypal form: a large space with a pitched roof relying on a traditional system of pillars and beams in wood, the preferred material, also used for the floors, the minimal casements, the panels painted with lively touches of red and blue, the sliding shutters that allow light and breezes to enter, conveying the sensation of a large, seamless belvedere terrace.

The living-veranda zone of the cabana, for spending time with friends, opens completely both inside and towards the outside, establishing relations with the lush surrounding nature. Behind it, the kitchen and the night area, including a bedroom with yellow shutters and a separate bath, have a more traditional, discreet image.

The climate in Paraty is tropical, hot and humid. Therefore the designer has paid close attention to orientation and natural ventilation, while protecting the walls and openings from the weather. The skin of the construction supplies a balanced atmosphere of warmth and essential intimacy in the residential spaces, where it feels as if time stands still.