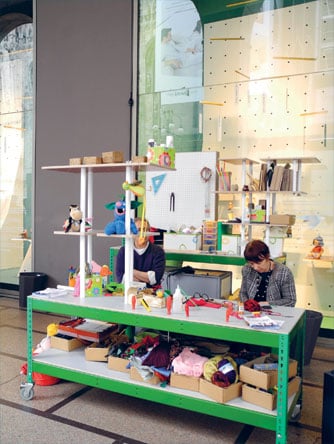 Waste not want not! Because a broken or damaged object can be fixed, transformed into something else, or even become a one-of-a-kind work of design.

Who knows if the protagonist obsessed with shopping of the “I love shopping” novels of Sophie Kinsella would appreciate the metamorphosis of her stuff by means of repair? But for Martino Gamper, the designer from Alto Adige based in London, feeding new design ideas means, first of all, taking care of what we already have, and thinking about longevity that can also be prolonged by interaction to enhance the intrinsic creativity of the act of consumption. No small thing, as a worldview. In a period of e-commerce, compulsive consumption, but also austerity and recession, maybe we need a new perspective. One curious place to find it was Gamper’s site-specific installation “In a State of Repair,” done in partnership with the Serpentine Galleries of London and Rinascente, during the FuoriSalone 2014, to revolutionize the concept of customer service and temporary art confined to galleries, offering an engaging experience for the public. Gamper created eight workstations where under his guidance regarding the use of materials and techniques, skilled artisans fixed and transformed old and new objects, free of charge: leather accessories, shoes, books, toys, technological items, garments, chairs, bicycles. The location of the mini-workshops: the porticoes of Rinascente in Milan, on Piazza Duomo. Each of the eight windows of the historic shopping temple became a majestic setting, day by day, a mutable landscape of new forms granted a second aesthetic and functional life. In the fascinating dimension of design one-offs. “Besides honoring often underrated manual skills,” the artistdesigner explained, “I hope this installation will encourage people to keep things instead of throwing them out, raising awareness at the time of purchase and reducing waste.” A concrete proposal, in terms of sustainability. The aroma of a new Renaissance can also begin right here. Photos In the images, craftsmen at work during Design Week in the mini-workshops coordinated in the project by Martino Gamper, as they repaired and transformed old and new objects brought by visitors, free of charge. Hosted under the porticoes and in the windows of La Rinascente, Piazza Duomo.