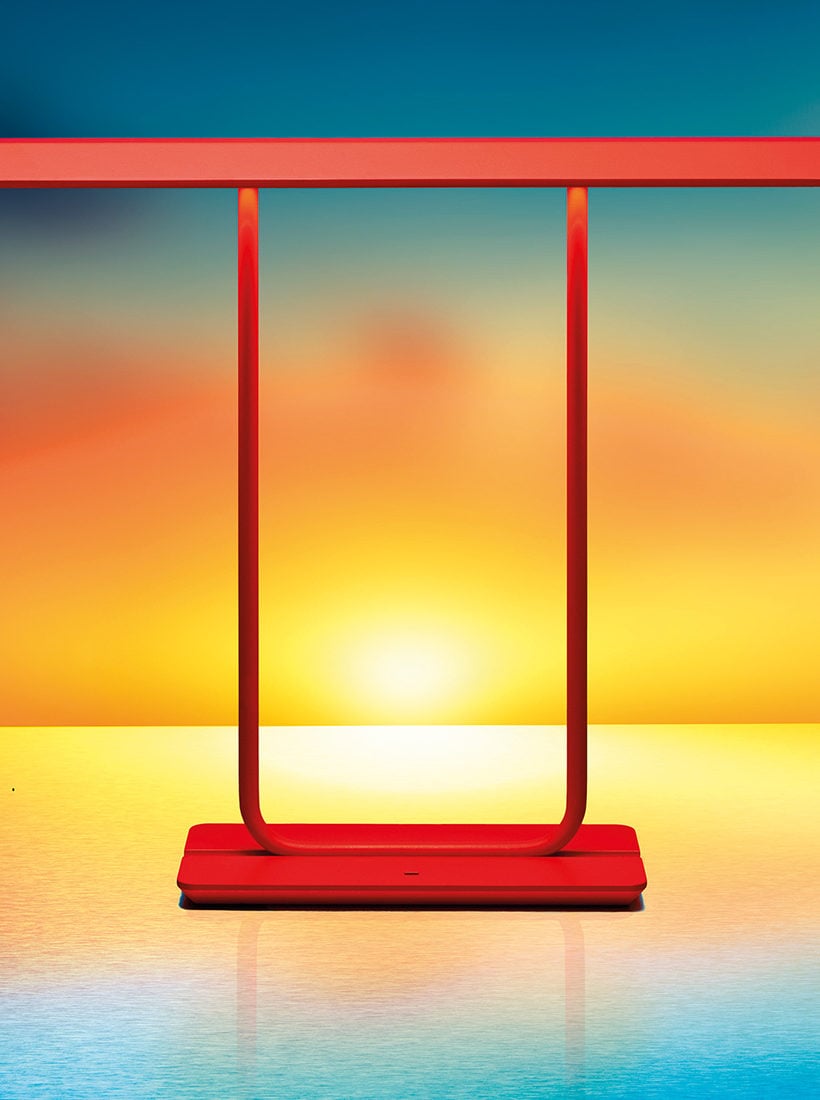 A few years ago the advent of LEDs in ‘consumer’ lighting devices opened up new design scenarios. After some reluctance to abandon the traditional forms and types – the incandescent bulb was and still is deeply rooted in collective memory – LED technology began to develop its own design language.

Formal archetypes like the lamp-with-shade or the flex-arm desk lamp gave way to rather formless, indefinite objects. Some were like sculptures, others were dematerialized, flat, or built into decorative surfaces.

The reliability and high technological level of LEDs allow designers to push beyond limits. They can now design a lamp made of very light parts that spread out on a wall like fungi (Ivy by Francisco Gomez Paz for Luceplan), a chandelier composed of uniform light filaments that seem like off-scale chains (Arrangements by Michael Anastassiades for Flos), or objects whose poetic character lies in the relationship between the light sources and a reflecting material (Tempio by Atelier Oï for Artemide).

The trends in design and research seem limitless, also considering the fact that LEDs, made of electronic circuits, can transport bits – and therefore information – as well as light. Which brings us to the Internet of Things. The foundation of everything is creativity combined with reason.

Francisco Gomez Paz. “Beauty is something rather mysterious that shows up when I search for truth, goodness and doing the right thing,” says the award-winning Argentine designer. Born in 1975, Francisco Gomez Paz studies light starting from the unfulfilled potential of new technologies. His research has led to a Compasso d’Oro in 2011 and the Prize of Prizes for Innovation with the Hope lamp, designed with Paolo Rizzatto for Luceplan. For the same company, he has created Ivy, a wall lamp in which each ‘leaf’ is simultaneously body, LED light source, electrical circuit and heat sink.

What are the innovative features of Ivy?
It is a square sheet bent at one corner that incorporates a very slim copper printed circuit, reducing components and materials to a minimum. It is a lamp for free configurations, which instead of packing the punctiform light of LEDs in a single diffuser, achieves a luminous effect based on multiple elements. I investigate the potential of technology inside an aesthetic path not yet taken, not linked to the past.

What aesthetic emerges from the use of LEDs?
For years LEDs were used in lamps that tried to replicate the image of incandescent sources; finally, today the LED is starting to determine the object. The light source, which in incandescent or halogen fixtures is single, and is controlled by diffusers and projectors, become punctiform, where each point can be managed separately.

What are the other technological innovations in the lighting sector?
There are no others that have as much impact as LEDs. OLEDs are not ready yet. The electronic component in LEDs will lead to the design of objects with an ‘intelligence’ (Internet of Things). For example, in my Mesh lamp it is possible to control, via wi-fi, the individual luminous elements and to interact with information. However, the real problem of the IoT is not what can you can do, but to find practical uses. Production techniques like 3D printing can also revolutionize this sector, but only if they are inserted in a context of industrial production. It is important to develop design culture, to reinvent what we are doing through ideas.

Atelier OÏ. “The presence of emotions and a contemplative mind are parts of our creative process.” This is how Aurel Aebi, Armand Louis and Patrick Reymond describe the design approach of Atelier Oï, the interdisciplinary studio founded in 1991 in La Neuveville, Switzerland. For Artemide they have designed the Tempio table lamp, inspired by the philosophy behind Japanese temples and the colors and forms of their gates. As in the previous lamps designed by the trio, Tempio is a light that is not only functional, but also adds atmosphere and color to spaces.

What are the main characteristics of Tempio?
The light source is intense, like Zen, a source of calm. We want to bring light through a simple, symbolic object. It is a reassuring product, not futuristic, not attempting to take technologies to an extreme. It is the archetype of a reading lamp, in search of warmth and company.

What type of light is produced by LED technology?
LEDs produce a linear light that has its limits, and can sometimes become aggressive. We have fixed this problem in Tempio by using an indirect source, reoriented and refracted to amplify its effect. LEDs should not follow the path of dematerialization, which does not fill space; they should use the material of the body of the lamp to make light pleasing. LED technology is efficient but a bit ‘empty.’ It is the lamp that can amplify its effects and compensate for its shortcomings. We look for what lies between technology and material.

What is the state of the art in the lighting sector, especially among Italian companies?
Technology is evolving very quickly, so it is hard to concentrate on one single aspect. Or to respond to deeper questions like those of the emotional and psychological impact of light. Technological innovation is positive only if there is a long-term perspective, to understand if it brings real improvement. Though Italian companies have written history in this sector, they have to adopt a new way of thinking, more collaborative, more in tune with global thought in a period full of transitions, questions and uncertainties. The relationship between the company and the designer has to lead to a transparent vision, open to the debate on an international scale.

Michael Anastassiades. “Eclecticism, individuality and timeless aesthetics” are the qualities of the design of Michael Anastassiades. Born in Cyprus but based in London, in 1994 he opened his own studio, and in 2007 he founded his own lighting brand that interprets the geometry of the luminous globe. His Italian debut, in 2013, came with the Strings collection for Flos, with its original relationship between the lamp and the surrounding space. For the same company, at Euroluce 2017 he presented the Arrangements series, a system of geometric elements for multiple compositions.

What are the innovative features of this year’s products?
Arrangements associates modular design with the concept of customization. I began with the parallel between lighting objects and jewelry. They are both linked to the human sphere: designed to be worn, in one case, and to decorate inhabited spaces in the other. The challenge was to understand how the delicate nature of something small could conserve its preciousness in space. Instead, for my brand, after ten years I have started over again. I did not repeat the language of the sphere, but concentrated on the expressive potential of materials. We used brass and worked on the colors of the patina, bringing oxidation into processes of industrial production. I have also made a collection of porcelain lamps, studying the evocative aspects of the pieces [one source of inspiration was the traditional Cyprus clasp, in the photo, ed.].

Are there new technologies for the lighting sector?
Today I do not see something already tested and ready for the market that can have the same revolutionary impact as LEDs, which are now a very reliable technology with lots of innovation. But LEDs have limits, like the flatness of the components or the point-by-point light units that require projection through a larger diffuser.

What is the difference between designing for a company and doing it for your own brand?
This year Flos was courageous and daring in its proposals, shifting the limits of the possible. I don’t design for any other lighting companies, because I believe in lasting partnerships and the mutual exchange of expertise. With my brand I can directly monitor the manufacture of products, but Flos gives me a chance to make more complex objects for a wider market.