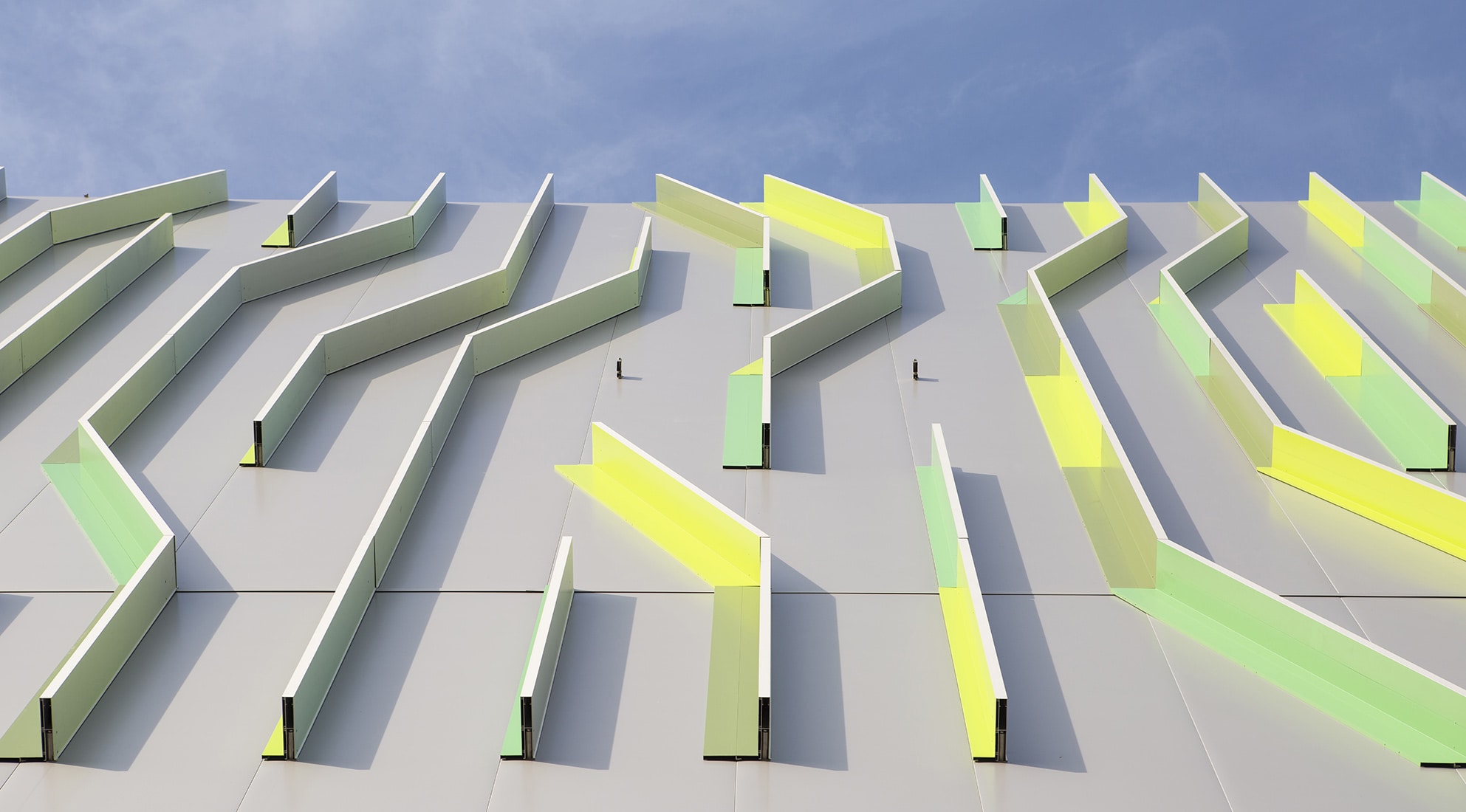 In Italy the industrial shed is a widespread building type, from North to South, almost a standardizing language scattered throughout a wide range of landscapes – countryside, suburbs, cities – and essentially dictated by criteria of a functional and quantitative character.

The rectangular or square modular plan imposed by the size of the prefabricated concrete panels and the internal production lines, sometimes enhanced by composite materic treatment or simple paint finish, using colors connected with the company logo, is interpreted in productive buildings inserted in industrial zones in every municipality, even in vineyards, orchards, or amidst age-old olive trees.

Of course there are many exceptions: the works of Gino Valle and Tobia Scarpa in this sector stand out as illustrious examples, but the impressive quantity of sheds along our highways bears witness to the mainly functional, pragmatic character of this typology in Italy.

Over time, the focus on the landscape and its forms has zoomed in on the insertion of industrial constructions capable of establishing a relationship with the context according to qualitative criteria. The concept of ‘mitigation’ is now applied above all to new industrial typologies like waste-to-energy plants, power stations, warehouses and large-scale storage facilities, automated stock centers, buildings of large size often without any windows or permanent staff, mute containers generated mostly by the algorithms of corporate logistics.

This is the case of the automatic warehouse of Pedrali, a company of reference in the sector of Italian furniture design. Created to improve customer service, the new storage building for about 17,000 pallets covers an area about five times smaller than that of a traditional warehouse, therefore occupying less land; the company stocks finished and semi-finished pieces here, with an internal train and transport robots, near two existing industrial spaces for the production of the furniture collections in plastic and metal.

The warehouse, 29 meters high with an overall area of 7000 sq meters (measurements mathematically generated on the basis of data gathered from the production lines, from the molding operations and the requirements of suppliers), is composed of large load-bearing shelving that supports the roof of insulated aluminium-tone panels, like those of the facades, applied to metal posts of the warehouse-cage on which automated shuttles run.

The theme approached by Cino Zucchi was that of working on the skin of a container-building, transforming the mute facades into an expressive surface that can become part of the landscape, getting beyond the logic of mere ‘corporate communication,’ of decoration of a botanical or chromatic type as an end in itself, rethinking the concept of ‘environmental insertion’ in an innovative way.

After all, the focus on the landscape and, more in general, on the environment is one of the main corporate values of Pedrali. In the plant at Manzano, in Friuli, for the production of wooden items, Pedrali has obtained FSC certification for the wood supply chain (guaranteeing origin from correctly managed forests in keeping with precise environmental, social and economic standards).

In a different way, and on an architectural scale, the company’s focus on landscape takes concrete form, through the project by Cino Zucchi, in the new automated warehouse. Besides creating a new connection for the existing spaces, marked by a green suspended panoramic walkway that penetrates the storage facility, Zucchi has designed an outdoor system applied to the facades, composed of aluminium blades placed perpendicular to the facade and painting on one side with three tones of green in overlaid bands.

The irregularly shaped blades form an ‘architectural climber’ that makes the entire building vibrate, like a visual amplifier of the cultivated fields. The resulting relationship is one of open dialogue and confrontation, and the concept of attenuation is replaced by that of landscape insertion, balanced and explicit, resolved with the tools of architectural composition rather than with the usual ineffective botanical disguises.

The southern facade, along the historic Via Francesca, where the intervention is more extensive for those arriving from the center of Mornico, offers a sequence of aluminium blades that absorb the different colors of daylight and the seasons, while at the same time tempering the chromatic effects of the colored side, reflected from one blade to the next. Arriving from the western side, from the country, the green of the fields seems to climb up the facade to reach the sky.

The parallelepiped of the warehouse has also been treated with two effective counterpoints. The first is a sort of slippage of a portion of the facade to create a protruding wedge: its function is to conclude the perspective from the main entrance of the company, while at the same time opening a glazing on the solid facade to display the internal vertical warehouse to the shipping and receiving plaza.

The second element, deployed to enhance the initial geometry of the building and to break up the ‘hierarchy of the right angle’ – a recurring practice in the research of Cino Zucchi – is represented by the low volume placed on the western facade, parallel to the existing stream, containing the route for public visitors. The green walkway that enters this added volume and offers a view of the mechanized warehouse is at the back of a large glazing open to a small secret garden of bamboo, another landscape sign grasped inside the folds of this industrial architecture 3.0.