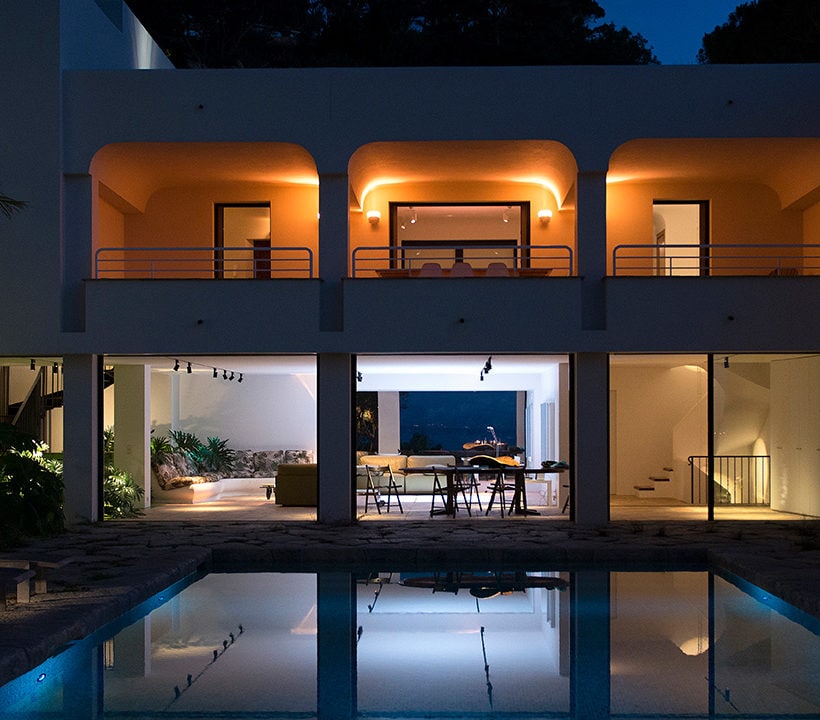 Is this the party (again)?

#London
Is this the party (again)?

The villa redesigned by Annabel Karim Kassar summons up the golden atmosphere of the French Riviera in the early 1960s. With the intense indoor-outdoor dialogue of The Party, the masterpiece film directed by Blake Edwards

The projects of Annabel Karim Kassar are like ‘signature cocktails’ with a secret ingredient: you enjoy the blend of flavors, but you can’t guess exactly what they are. As in the case of this white villa near Ramatuelle. Built in the early 1970s – and already a bit alien with respect to the neighboring houses in Provençal style – after Kassar’s intervention the house has been transformed into a set of spaces, sequences and sudden turning points, suggesting the dynamism of cinema.

The inspiration, in effect, comes from a film masterpiece by Blake Edwards, The Party, where Peter Sellers unwittingly creates total confusion during a party at the home of a Hollywood producer, in a comedy of accumulating errors and exhilarating blunders.

The set for the film, by the Mexican designer Fernando Carrere, was a caricature of California modernism in the style of John Lautner, but what Kassar has borrowed is above all the relationship of indoor-outdoor permeability of the house (reconstructed inside the film studios), which from the very first scenes functions as a brilliant narrative resource.

In Ramatuelle a similar situation has been created: the ground floor living area has been doubled in size and expands outward, become a salon-garden sized for hypothetical throngs of guests. The party portrayed by Edwards is evoked by plants, the swimming pool that extends almost into the building, the sliding glass partitions that open completely, the gilded atmosphere of the 1970s, both in California and on the French Riviera.

Kassar says the fulcrum of the project is not so much the villa itself as its relationship with the landscape. She has reinforced this aspect, redesigning the plantings, inserting olive trees that light up in the evening; she has also shaped the perspective views, while allowing various grasses to grow on the roof.

Nature also penetrates the interior, underlining the indoor-outdoor rapport: a small jungle of philodendrons invades the living room, amidst real plants and others printed on the cushions of the sofa. The whiteness of the walls is interrupted to leave space for surprising blocks of stone, portions of the cliff on which the villa stands. Once hidden by the load-bearing wall of the living area, they resurface to form eight ‘mineral paintings,’ eight small internal gardens.

Though the objective was a radical change of identity, certain elements of interest have been conserved and enhanced. Such as the original terracotta floors, the bathrooms in volcanic stone, the rounded edges of the ceilings, and the lighting tower that rises like a high-tension pylon along one of the two stairwells – pure white, a spiral of plaster, in perfect contrast with the other staircase in steel with its custom-made fluo yellow steps. In Kassar’s architecture the play of opposites is a recurring motif.

As a true cosmopolitan (educated in Dubai, London and Beirut, the city where she has played an active role for its regeneration since the 1990s), in her works she has the habit of making distant worlds establish a dialogue. In this case, she brings together Modernism and Arts & Crafts, French stylemes and Middle Eastern notes, industrial materials and refined leatherwork, ceramics and volcanic stone.

The whole becomes more than the sum of the parts: there is also that mysterious ingredient, that elusive formula that distinguishes originals from stylistic exercises. And Kassar is undoubtedly an original.