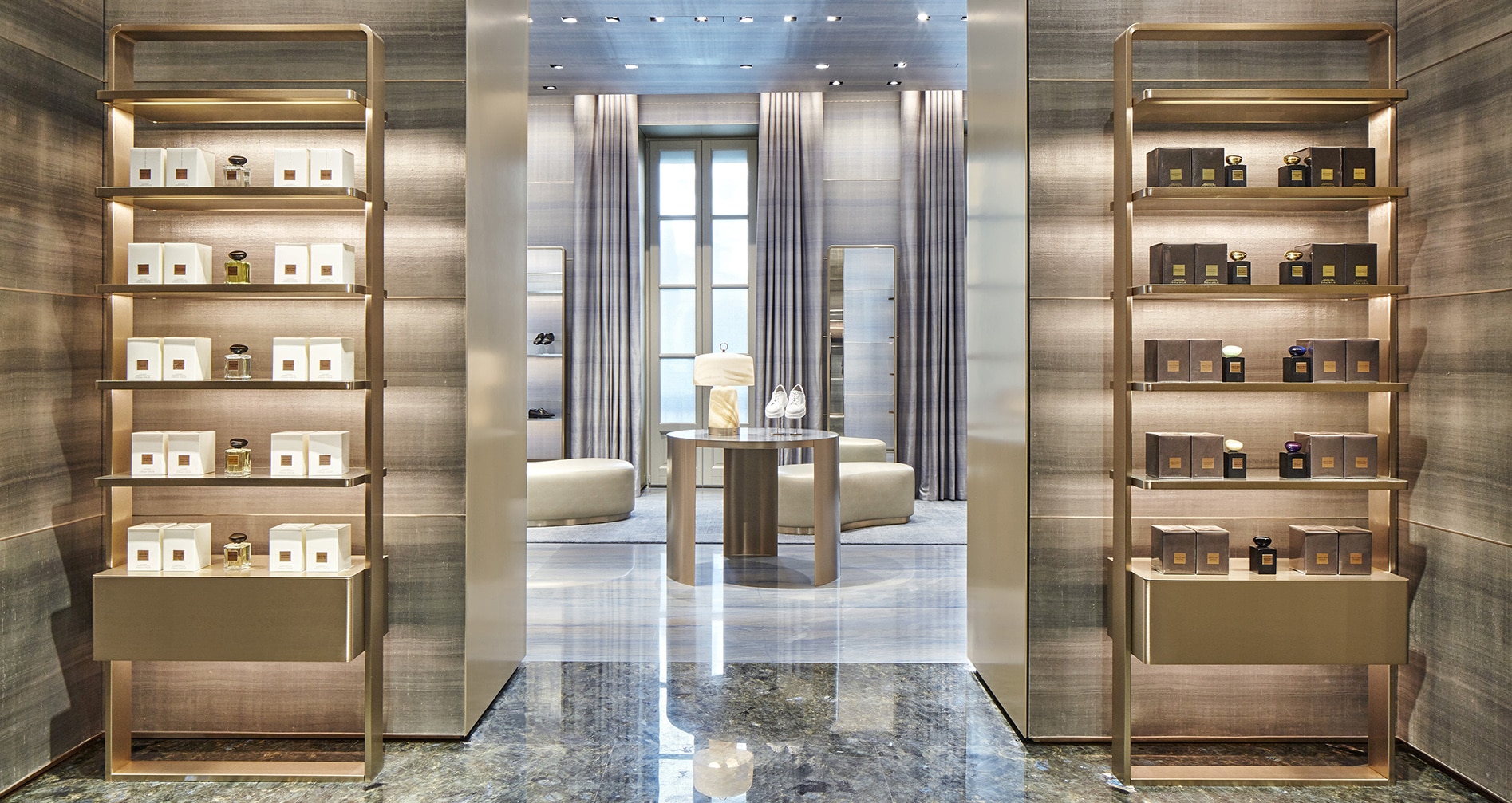 This last year has been particularly intense for Giorgio Armani. He celebrated the (first) 40 years of activity of his company, in parallel with Expo Milano 2015, where he was a Special Ambassador for fashion, opening the new Silos display space and setting up – in the famous fashion show theater on Via Bergognone designed by Tadao Ando – the exhibition of the major contract interior design projects around the world (see Interni, June 2015), right next to the presentation of the new Armani/Casa collection.

Not too far from this ‘personal’ district, on Via Monte Napoleone, he reopened the boutique in the historic Palazzo Taverna (where the poet Carlo Porta resided), a paradigmatic reflection of the crossovers and creative junctions of his work, projecting its lasting values of savoir faire and emotional intensity into the future.

The architecture is sober and monumental at the same time; the spaces, on three levels, are connected by a majestic new elliptical metal staircase, with a platinum finish and steps in extra-white onyx. The design is customized from space to space, enabling the garments on display to establish a dialogue and organize vibrant materic-chromatic plots together with the seating, lamps and carpets, all from the latest Armani/Casa collection, reinterpreted for the occasion.

Every piece, in its own way, is a protagonist of the precious mise-en-scene, corresponding to a precise aesthetic philosophy: the pursuit of essence, free of ornament. If the ability of a fashion designer lies in capturing an atmosphere and transforming it into a trend, then Giorgio is a true master.

The dynamism that has always been an earmark of his work is epitomized by the Armani/Silos on Via Bergognone, an industrial structure from the 1950s transformed into a museum space, the result of restoration and conversion directly supervised by Armani, who comments: “I decided to call it Silos because it was a place to conserve grain, a material for life.

Just like food, clothing also serves us to live. Deciding what to exhibit and how, I had a chance to rethink 40 years of work. Even in fashion, which seems to live in an eternal present, remembering the way we were can help us to understand what we might become.”

Here the habitat conserves, first of all, the curious original form of the building, like that of a beehive; a compact mass interrupted by a ribbon window that marks the perimeter like a crown. The internal spaces have been organized according to a basilica layout, with a triple-height open ‘forum’ faced by the two levels of the lateral naves.

The central staircase that connects the four levels offers a view, for those ascending it, of the great height and size (4500 m2) of the place, with its black painted ceilings, gray concrete floors, exposed iron structure, electrical, heating and cooling systems. The vision of a simple but majestic work of architecture, in full respect – as usual – for the genius loci.