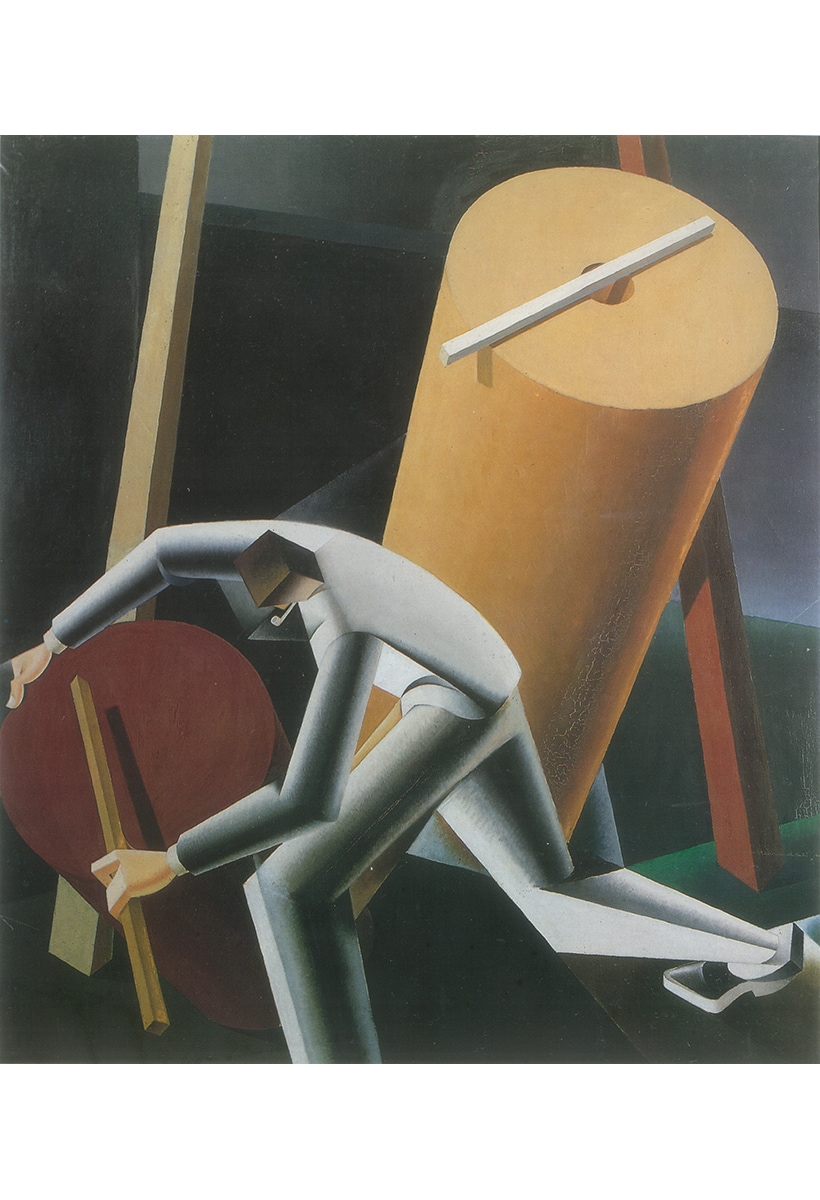 #design
Italian Bauhaus
An eclectic designer, ahead of his time and not very well known, Ivo Pannaggi can be seen as the sole Italian exponent of the famous German school. From furniture in metal tubing to other pieces in Macassar wood, expressing an idea of luxury free of ornament, his creations narrate the legacy of Mies van der Rohe and the art avant-gardes of the 20th century

The Bauhaus centenary has led to various reinterpretations of the what the German school has meant, and continues to represent, for design culture. Many rediscoveries have emerged, such as that of female figures like Anni Albers, relegated to supporting roles in the years of the school, though they were witnesses and fundamental participants in research on materials and techniques of great interest today.

In Italy the echoes of the Bauhaus movement undoubtedly converged in a wide-ranging assertion of a concept of modernity that can be seamlessly overlaid with the international Rationalist movement, where our country had a number of outstanding epigones. But if we decide to search for a direct witness, the only voice that surfaces is that of an extraordinary character, outside institutional currents: Ivo Pannaggi.

“
Pannaggi introduced furnishings in metal tubing, which had captured his attention since the time when he had purchased one of pieces by Breuer, in 1926 during a visit to the newly opened Bauhaus in Dessau."

Born in Macerata, Pannaggi was the only Italian artist to have had personal contact with the great historical avant-gardes of the 20th century, involved with the Italian Futurists, the Russian Constructivists and the Bauhaus in Dessau. Shortly after reaching the age of majority, he moved to Rome where he entered the circle of Bragaglia and came to the attention of Marinetti and Balla (he would also pen the Manifesto of Futurist Mechanical Art with Vinicio Paladini in 1922).

Starting in 1924, he began regular correspondence with Walter Gropius, which lasted about ten years; in his first letter, he tells the German designer of his desire to write an article about the school, and to study at the Bauhaus himself. In 1925 he went to meet Gropius for the first time in Dessau, and he then returned to the Bauhaus on other occasions, before enrolling in the winter semester of 1932, attending classes until the closure of the facility in 1933. 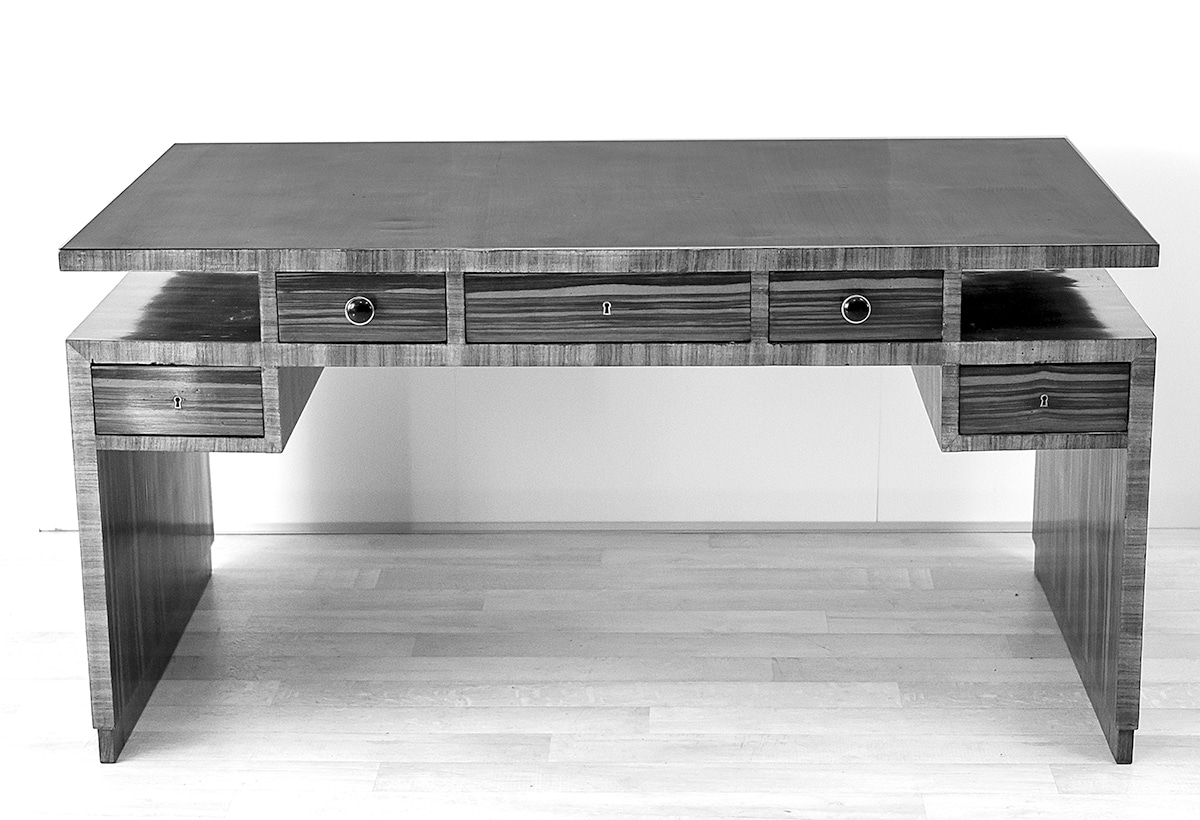 3
Desk, 1936. The piece was made for Casa Benigni in Padua in Macassar wood, an unusual type of wood already utilized in the Tugendhat house at Brno by Mies van der Rohe, the great master much admired by Pannaggi, whom he had met in the role of director of the Bauhaus in the final period of the school.

Pannaggi was accepted as a student also because of a certain fame acquired with the interiors of Casa Zampini at Esanatoglia, in the province of Macerata. This was a refurbishing project that blended Futurist, Neo-Plastic and Constructivist influences, demonstrating that the avant-gardes, from a wider perspective, had all contributed, at least indirectly, to the definition of Modernism accepted by the most attentive artists on the international scene. At Casa Zampini there was no “decorative encrustation: the geometrically precise form completes itself in a plastic way,” as he put it.

But if this interior is proof of careful observation of the melting pot of international influences of the avant-gardes, which also have an impact on the first Bauhaus of Gropius, his evolution as a designer is epitomized in Casa Benigni, clearly developed under the influence of the later Bauhaus, that of Mies van der Rohe in the years of crisis, until the move from Dessau to Berlin and the closing of the school by the Nazis. The official semester of study at the school in 1932, in the aura of Mies, together with friendships in the years before with other protagonists, left an indelible mark on this interior, which to all effects can be considered the only one in Italy designed under the direct teachings of the German school. 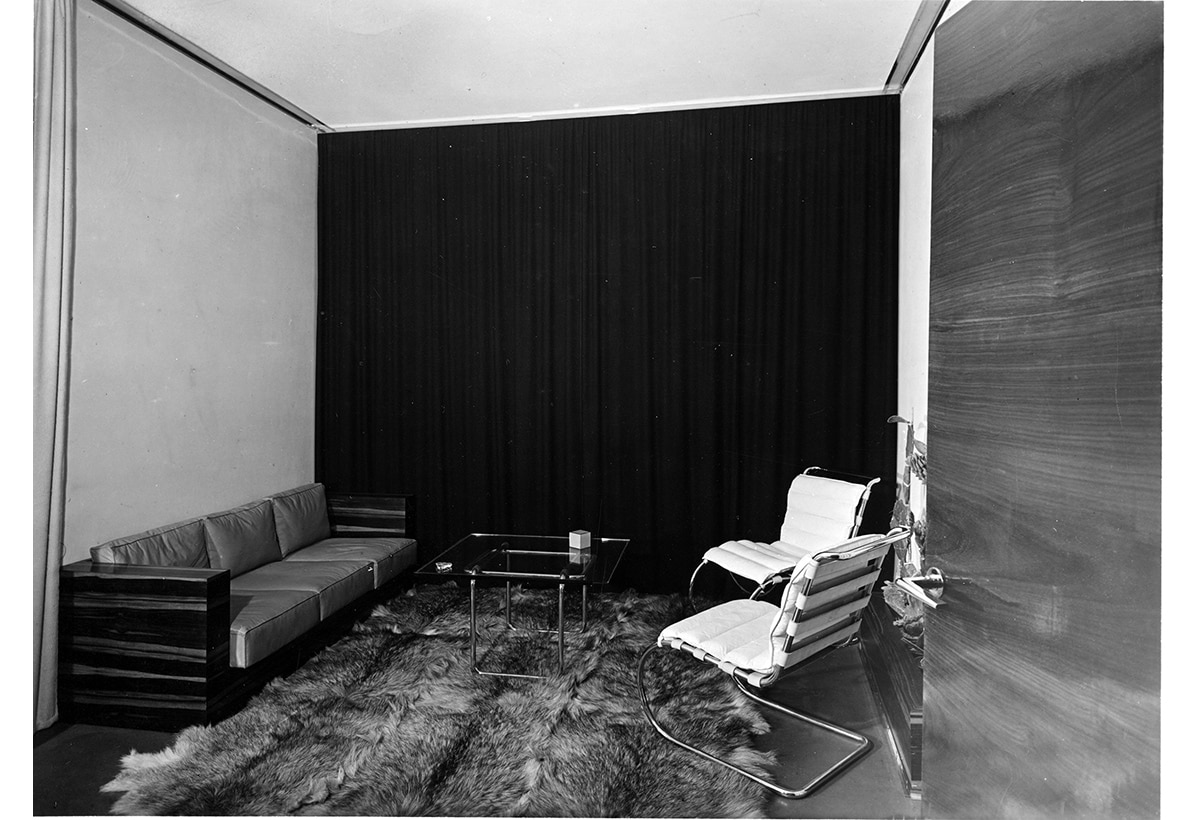 6
Salottino Casa B, 1933. The poise of the interior design also emerges in the choice of the furnishings: those designed by Pannaggi himself, like the sofa and the planter in Macassar wood, but also those he selected, like the chairs from the MR series by Mies van der Rohe and the curtains derived from pieces by Bauhaus.

In what he called Casa B – created for his sister Eura Benigni in 1933, just after his return from Berlin – Pannaggi introduced furnishings in metal tubing, which had captured his attention since the time when he had purchased one of pieces by Breuer, in 1926 during a visit to the newly opened Bauhaus in Dessau. We can imagine that this was one of the first specimens brought to Italy of that trend towards used of tubular metal, which with the support of the Rationalist movement was to invade modern interiors in a large portion of the world. Proof of this enthusiasm can be found in the articles Pannaggi wrote in those years, as an Italian correspondent in Germany for La Casa Bella, Domus, Edilizia Moderna.

This position in journalism undoubtedly helped him to come into contact not only with Gropius, but also with Breuer, Feininger, Itten, Schlemmer, Klee, Kandinsky, Moholy-Nagy, Albers. But the strongest design link is clearly that with Mies van der Rohe and Lilly Reich. In the Benigni house the tribute to the masterpiece of the Tugendhat house in Brno is vividly perceptible. First of all in the far from banal choice of Macassar wood, which Mies had utilized with vertical grain, while Pannaggi made it horizontal. The wooden curve of the German master is acknowledged here by a wall with a door and a fold-back panel concealing a bar cabinet/corner.

“
Pannaggi was the only Italian artist to have had personal contact with the great historical avant-gardes of the 20th century, involved with the Italian Futurists, the Russian Constructivists and the Bauhaus in Dessau."

The piece itself, custom made, is in the same wood, and reveals elegantly sober lines that combine the ambition of a new idea of luxury obtained by elimination of superfluous decoration with the enhancement of noble materials. The Macassar wood was also used for the three-seat sofa, a desk, a table and a planter for cacti – a type of plant loved by Gropius and often inserted in his interior design. The overall effect was completed by various pieces Pannaggi ordered directly from Germany: handles, drapes, tables and chairs.

The acquaintances made in the Bauhaus years led Pannaggi to other international contacts. Besides America – where many of his teachers and friends from the school had moved to get away from Nazi-ruled Europe – he spent many years in Norway, with repeated trips to Lapland, beginning a trend of rediscovery of the native crafts origins of useful objects that was followed by many Scandinavian masters.

A lifetime truly marked by mental openness and the stimuli of the greatest protagonists of 20th-century design history. Also for this reason, today, after the recent earthquakes in the Marches, the furnishings and interiors by Pannaggi deserve critical reassessment and conservation.