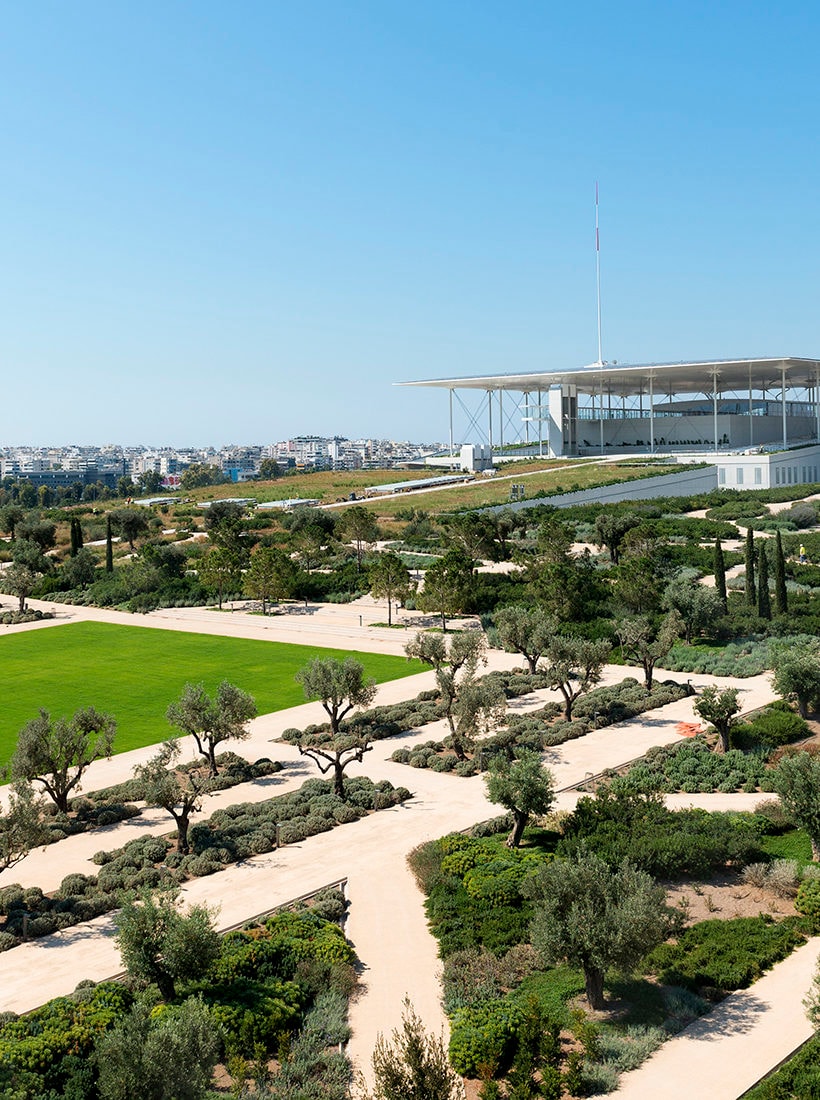 Interview with Renzo Bianchi, partner RPBW
Architect Bianchi, what is the outcome for RPBW of this new design experience? Did you meet your objectives?
We are very happy with the results: the building is as we imagined it, living up to all our expectations. Also thanks to precious teamwork with the Athens-based studio Betaplan and with Deborah Nevins (see the following interviews, ed). Although the Stavros Niarchos Cultural Centre is not precisely a building…

How so?
The volume is the result of a movement of the terrain that gradually rises to form an artificial 35-meter hill, to contain the National Library and the National Opera House, the two main features of the multifunctional center commissioned by the Stavros Niarchos Foundation.
So the landscape, i.e. the park, is the strategic node of the project: you walk on a green mantle covered with Mediterranean vegetation, that gradually encloses the constructed part as if it were an underground structure. And just as happens in nature, as you climb up the slope the vegetation gets less dense, the trees give way to shrubs, so at the top you can see the immensity of the sea.
The idea of ‘raising’ the terrain to free the gaze, all the way to the island of Aegina, and to capture the sunlight, was there from the very start of the project. We were just 200 meters from the Mediterranean, but the sea was not visible: so we wanted to give it back to the people of Athens. And the project also offers another possibility…

Which is?
That of discovering Athens from a new perspective, a novel experience for its inhabitants: and this is the big surprise. In no other place in the capital can you see both the sea and the urban fabric at the same time (not even from the Acropolis). On the other hand, we should remember that this area is called Kallithea, which in Greek means ‘the best view,’ though for many years it was simply an abandoned parking facility.

A project of urban regeneration, then, or as Renzo Piano puts it a work of mending between the city and the periphery?
Absolutely. The problem was to reattach a void of 200,000 square meters: a nonplace that over time had completely lost its identity. The project sets out to give the city new breadth, but above all to offer the whole community new spaces for living, where people can feel at home, meet, spend time together…
Here too the park opened in August (the library and theater will be operative starting next year, ed) plays a very important role: it constitutes 85% of the whole Stavros Niarchos Cultural Centre, creating an immense green area open to the public every day.

Nature, but also lots of technology: what role is played by high-tech innovations in this project?
Technology is used in many different ways. From the anti-seismic system of the building to the great canopy at the top of the hill: a sail of 100 x100 meters, completely covered with photovoltaic panels to make the building sustainable and self-sufficient in terms of energy.
A high-tech project, but one where manual labor was fundamental. Just consider the way the 750 modules in ferrocement are joined like a puzzle to form the large canopy, and were made on site by about 350 workers, in a factory built on the worksite. This was a real challenge: no one believed we could do it.

What remains with you after this adventure?
The image of a lively, chaotic city that is now close to my heart. Where on a (new) hill there is a place that offers peace and beauty. For everyone.

Interview with Ioannis Ventourakis, founder of Betaplan, Athens
What was it like to work with Renzo Piano? Were you already acquainted?
No, I didn’t know him personally. We worked in harmony, each applying his own expertise, fully respecting our roles (Betaplan was executive architect of the project, ed).
Renzo Piano is a charismatic and particularly intelligent person, but he is also open, humble, cooperative. He knows how to listen, always, to understand the desires of the client, to adapt without compromising his design choices. With my studio, I have learned a great deal from this collaboration, an added advantage of being able to work with a great architect and his fantastic team.

You live and work in Athens, so you have in-depth knowledge of the social and territorial realities of Greece: do you think the new center can become an important factor for the rebirth of the Greek capital, and more?
Of course. Large projects can set off virtuous mechanisms. I can list some of them. The construction has created jobs in a very difficult period for the economy of Athens and all of Greece, which can be increased when the center begins full operation. The project has led to cultural and social rebirth in a very badly deteriorated area, also contributing to the development of the waterfront.

How have the people of Athens responded?
At first they were rather skeptical, but then they began to understand and the city now believes in the project. The project of sharing – a strategic one, I’d say – implemented by the Stavros Niarchos Foundation with local residents was important. Over the last three years, during construction, the people of Athens could get to know the project (and also Renzo Piano) up close, learning to feel like it is theirs, part of the everyday life of the city.
At the same time, there is some concern about the future, when the center will be donated to the state (as decided by the Stavros Niarchos Foundation, ed): similar cases from the past do nothing to encourage optimism… nevertheless, the positive dynamic that has accompanied the genesis of the project allows us to hope. In short, the premises are there, so we have faith in the possibility of a happy ending!

Interview with Deborah Nevins, Founder of Deborah Nevins & Associates, New York
Did you want to create a sort of Central Park for Athens?
More than anything else, I wanted to design a park that would speak Greek, a place that conveys the ‘smells and flavors’ of the Mediterranean. All the plants are native to the Mediterranean basin, and have been selected to stand up to an arid climate. Rows of olive trees bring shade to the pathways, which are made of ‘prolat,’ a local organic material that conveys the impression of blocks of earth.
On the hill covering the underground library local grasses have been planted: the seeds come from the Diomedes Botanical Garden of Athens, and were allowed to grow in a special greenhouse built for the project. So the park is connected to the hilly surrounding environment, in both symbolic and ecological terms.

What role can a landscape project play in the field of urban planning?
It represents an essential factor to revitalize a zone, as in the case of Kallithea. Just consider the fact that the park offers a running track, a playground, a labyrinth, a swimming pool… But we can also think about the positive effects on the environment, which in the case of Niarchos Park are particularly striking: a reduction of the flooding that took place in strong rainstorms, also thanks to the “green” roof; fresh air thanks to the planting of trees.
The park also stimulates new activities, encouraging socializing and improving quality of life in the city. It took two years to complete: 40 acres where we planted over 1400 trees and more than 300,000 shrubs, perennials and grasses. The objective was to finish the green area at the same time as the building: this is why we began the work in advance, and the Niarchos Foundation has supported us fully in this effort.

How was the teamwork with RPBW and Betaplan? Are you satisfied with this European project?
There was great cooperation: I always worked side by side with RPBW for the design of the park. Helli Pangalou (local partner for Landscape Design Services, ed) also provided precious help: day after day, she checked to make sure every aspect of the project was moving forward as planned. Finally, I would like to mention the Betaplan studio and their team: working together with them was a truly positive experience.

A striking view of the large park that rises to the hilltop with the panoramic terrace of the new center, offering a view of the sea and the city of Athens at the same time.
Renzo Piano with Giorgio Bianchi, partner of RPBW.
The side of the hill facing the artificial canal. The cultural center stands out in all its complexity: the theater extends below the covered terrace (see the section), while the large glazed library faces the agora.
Section of the project.
Ioannis Ventourakis, founder Betaplan, Atene
L’ingresso alla Biblioteca dalla piazza centrale: sulla sinistra si scorge lo scenografico ‘castello’ di scaffali di legno, che accoglierà migliaia di volumi provenienti dalla Biblioteca Centrale di Atene. Le poltroncine Basket e i tavolini Dan sono di De Padova; lampade da terra Grande Costanza’ di Luceplan.
The entrance to the library from the central plaza: on the left, the dramatic ‘castle’ of shelves that will contain the thousands of volumes from the Central Library of Athens. The Basket chairs and Dan tables are by De Padova; Grande Costanza floor lamps by Luceplan.
The Opera House, an underground space organized under the terrace.
Deborah Nevins, founder Deborah Nevins & Associates, New York
The ascent to the panoramic terrace from the park: 1400 trees recreate typical Mediterranean brush, full of colors and smells. Open to the public every day, free of charge.
The plan.
A detail of the park.
#Design #Projects #New York

Bluegame BGX60: revolution on board