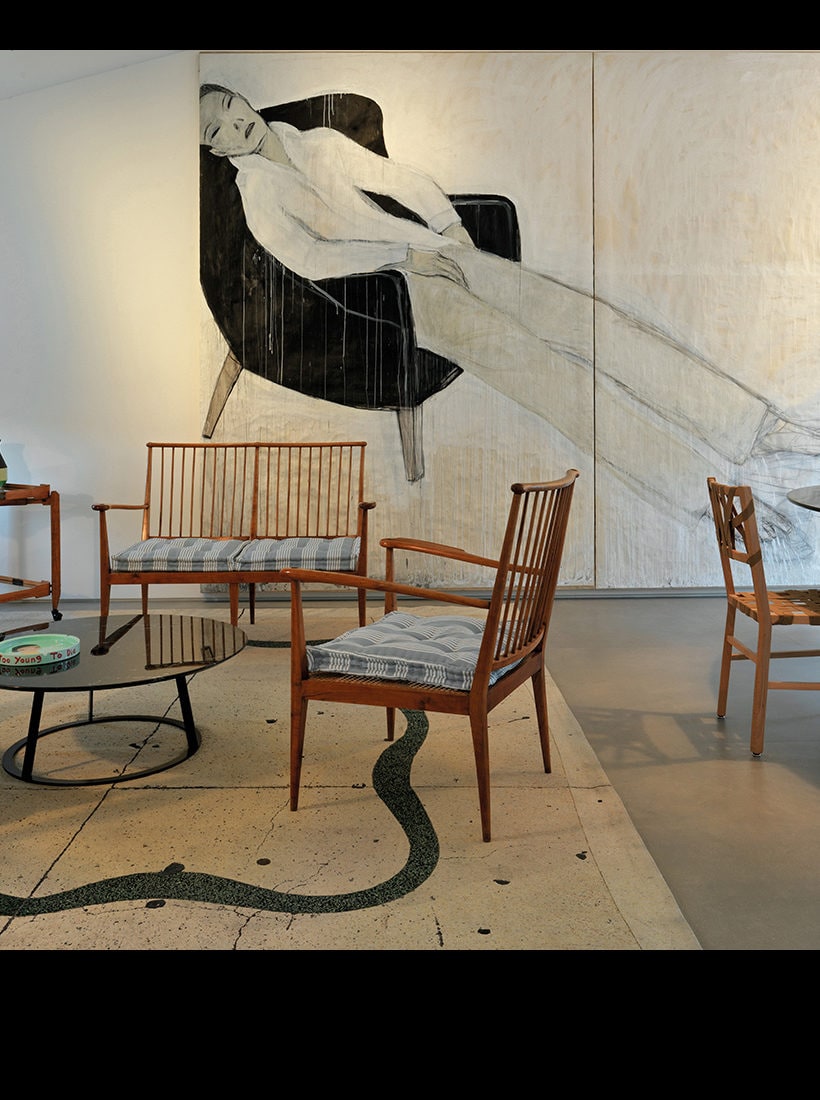 Let’s say it immediately. The true spirit of this high-profile Roman residence is art. The engaging architectural narrative is sustained by contemporary works whose placement, colors and materials create a forceful relationship with the overall interior space, 260 square meters on two levels.

After the renovation by the Milan-based studio Monzini Raboni, the space has become their indispensable vehicle. The art works are enhanced by the flexible configuration, conveyed with lightness, economy, understatement.

This tailor-made place for two art collectors has the open, rarified atmosphere of a private gallery, radically different from what it was at the outset: a static scenario that inserted, in a classic layout, elements of the Renaissance revival context around the house, which features dual exposure and excellent view of the Tiber and the rooftops of the historical center.

The architects have applied a sort of neo-plastic breakdown to the masonry box, interrupting the repetitive arrangement of volumes and operating part by part with recesses and raised areas, full and empty zones, strategic openings, around a walkway that is the composition’s center of reference.

A geometric framework which with appropriate grafts underscores the spatial openness of the two levels and the circulation that encourages direct communication among the parts. The integration of functions, intimate zones and sharing has also been activated by replicating the existing facade arches towards the stairwell and the skylight, expanding the luminosity of the innermost zones.

Giuseppe Raboni explains: “Before the project, the main entrance was on the lower level, which was not convincing because it influenced the use of the living area and a conventional stone staircase. We decided to put the entrance on the upper level, optimizing an already existing situation.

This choice led to the idea of an internal footbridge conceived as a new protagonist and an element of connection, as well as a new staircase connected to it, matching its image in material continuity. The overall figure is one of great visual impact.

The new element, made in metal, and the detailed design of the railing, with the oblique forms of the parapet that project over the floor of the walkway like shadows, were the focus of great design effort.

We worked on them together with the structural engineering and the Project company of Turin, which made a prototype of the parapet to make it continuous, without apparent repetitions, though everything is constructed through a precise module for assembly.”

The promenade which acts as an ordering structure crosses the two-story space of the living area and leads to the entrance, from which other steps lead to the kitchen and the open dining area on the terrace, organized on the upper level. The other end of the walkway offers access, on the other level, to the master bedroom, isolated from the rest of the apartment and equipped with its own bathroom and closet.

On the lower floor the project has organized other bedrooms for guests and two large living areas connected by the rhythm of large openings and the presence of a full-height double-face fireplace at the center.

“Though they are complementary,” the designer says, “these living spaces express different interpretations of use. The first is more informal, while the second is for entertaining and conversing under the windows, where there is a circular sofa by Cini Boeri over which the walkway passes, in front of a large work in wood by Roberto Diago, a Cuban artist.”

As if to say, the furnishings too are not to be neglected for the mise en scene: classics of Italian design and Milanese modernism go hand in hand with art, discovering timeless domestic landscapes in a constant state of becoming.