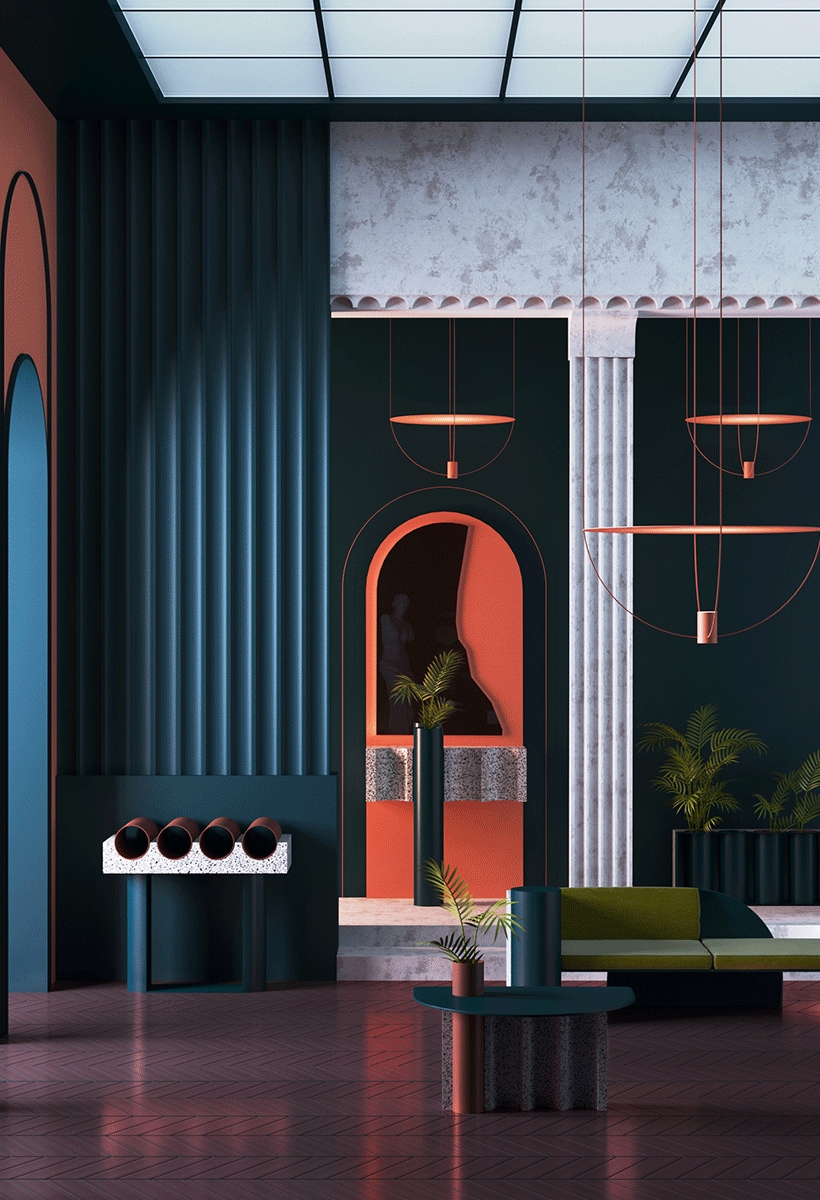 #design
The metaphysical house
Perspectives so precise as to seem unreal, geometry broken down into abstraction to interpret the short circuit between two and three dimensions in the contemporary world.

Ghosts have not always dwelt in darkness. The idea that phantoms and other spirit presences lurk in the dark was not common until the 1700s, in the cultural climate of Gothic romanticism, when a large portion of European sensibility expressed a forceful rejection of Enlightenment rationalism and, above all, of its armed branch, the ‘technicization’ of everyday life carried out by the Industrial Revolution.

Much earlier, however, in Pre-Socratic Greece, ghosts did not live at midnight but at noon, when the sun is at its highest and the shadows are small. This in fact is the moment when things seem most unreal, due to the absence or reduction of their ‘existential thickness.’

This dazzling sense of time that stops flowing – the Mediterranean light that absorbs the sky and transforms earthly things into pillars of salt – was reinterpreted by Giorgio De Chirico centuries later in the suspended scenes of his Metaphysical painting, displaying familiar objects (a glove, a wall, a square) in such a way that they became strangely unreal. This same ‘metaphysical’ feeling was applied by Postmodern design in its operations of deconstruction of the object and transfiguration of the modern. 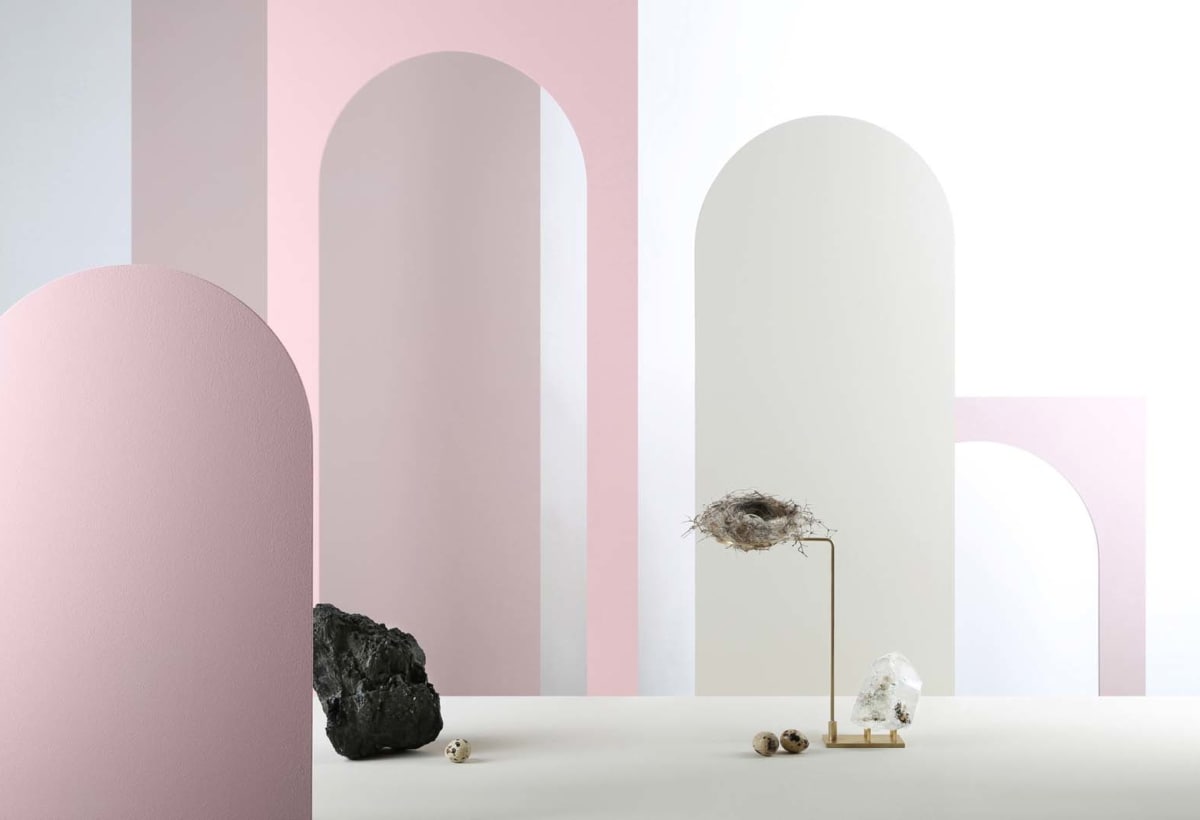 Today this thread is picked up and dusted off in a series of projects that recover the geometric use of color and the perspective deconstruction of form, generating objective scenarios that closely resemble the stages of Renaissance origin, intentionally erred, with which De Chirico broke down that ordering device of the world that was the central vantage point.

This is the case, for example, of the ‘wrong’ architecture Gaëlle Gabillet and Stéphane Villard (studio GGSV) imagined for the installation Palazzo Stamskin, commissioned by Serge Ferrari for the latest FuoriSalone in Milan, or the Arch Floor mirror by the studio Bower for Triode.

“
This return of metaphysical themes also involves the mixture of real and virtual dimensions typical of our contemporary world, caused by the spread of digital experiences."

The Lookout installation created by Note Design Studio to demonstrate the potential of Tarkett floors was also ‘too exact’ in terms of perspective to seem totally real, creating a space that could exist inside one of the buildings that appeared in Italian piazzas of De Chirico.

Focusing more on the object than the space, but based on the same process of geometric defragmentation of form, there are the Rise marble furnishings made by Gustavo Martini and the Ashkal mirror by Richard Yasmine (the latter should also be mentioned for the interesting setting of the photo shoot of the Wake Up Call lamp, in metaphysical style but as light as whipped cream).

While the objects created by Malmö Upcycling Service with recycled waste, and the Non-Existent furniture collection of the studio Supaform, feature structurally ‘regressive’ organization, assembled with basic and ‘autistic’ fragments, so to speak, each aware only of itself and not of its context of reference (there is no ideal central line of perspective around which to organize the whole).

This return of metaphysical themes also involves the mixture of real and virtual dimensions typical of our contemporary world, caused by the spread of digital experiences. Though the items in this area are conveyed by imagery, they are made to be touched. As the distinction between two and three-dimensional things blurs, the coordinates that once served to clearly distinguish between the real and the unreal tend to disappear, triggering a short circuit of visual perception narrated by the artist Roberto Cireddu (alias Ciredz) through installations like the destabilizing Volume 2.

“
In Pre-Socratic Greece, ghosts did not live at midnight but at noon, when the sun is at its highest and the shadows are small. This in fact is the moment when things seem most unreal, due to the absence or reduction of their ‘existential thickness.’"

A similar perceptive glitch is also found in the Anish seat by Emanuele Magini for Campeggi, equally poised between being real and being image. The project consists of a large circular graphic surface that though it is without three-dimensional extension, is capable of containing the body of the user, receiving (or introducing) it inside another dimension: that dimension that is found beyond (“meta”) physical existence, and can be intuitively grasped only through the déjà vu of something never seen before. Inhabiting the know as if it were the unknown.