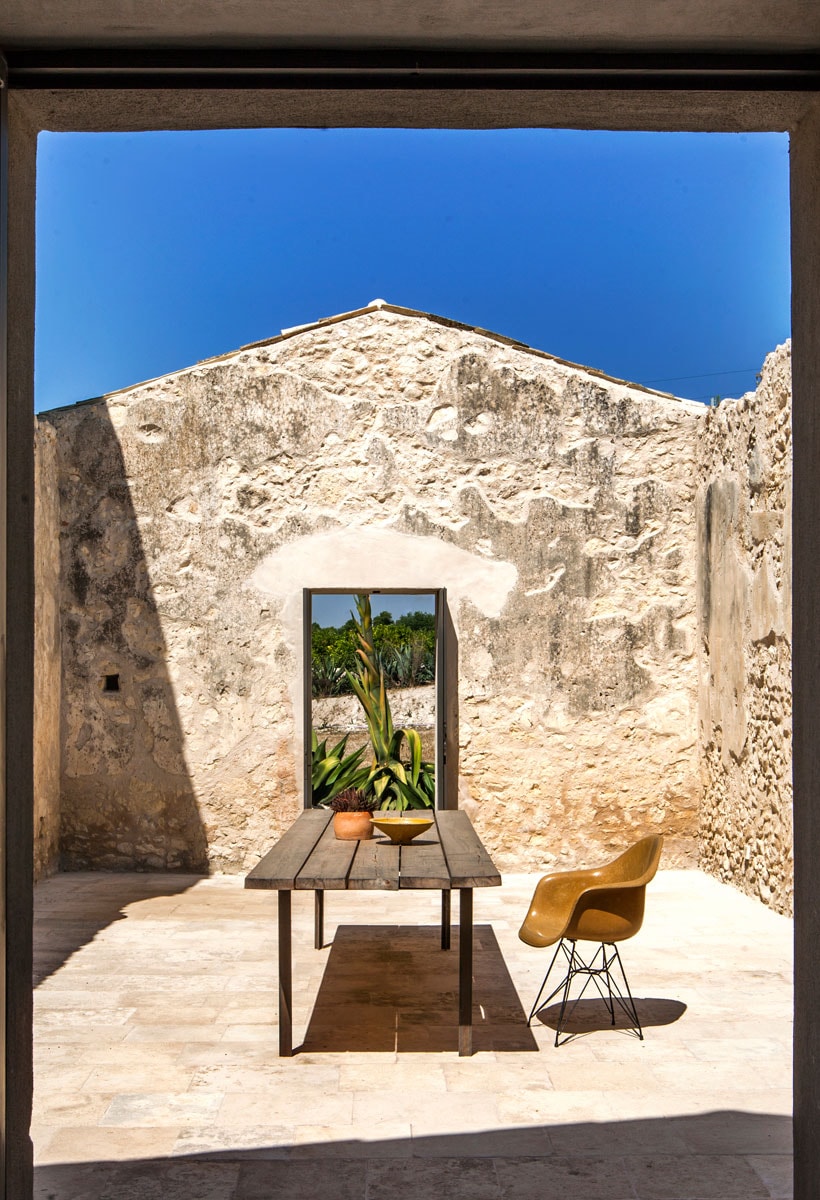 The patina of time

#architecture
The patina of time
On the plain of Noto, a farmhouse becomes a refuge and workshop for Antonino Sciortino and Maurizio Zucchi, with a chic, minimalist mood that rediscovers spontaneous ‘noble’ forms suspended between past and present

“Rural charm, the sounds of nature and farming machinery. Rooms that trigger instant summer. Wonderful sunshine, a nearby beach, the sea.” Antonino Sciortino and Maurizio Zucchi, guests near this farmhouse in the Tellaro valley, a place of hay, wheat and lemons, feel in love with the place about 20 years ago.

“We didn’t yet have the idea of making a guesthouse-workshop-exhibition space for our works in iron,” Maurizio recalls, “from the more artistic pieces Antonino makes, like the stylized sculptural faces, to the decor pieces we design and produce together, also experimenting with combinations using other materials, stimulating by the dialogue with companies and by a local network of outstanding artisans.”

Together, they have nurtured the dream, rediscovering the patina of time of this abandoned place that jibes well with their linguistic approach, as well as with the idea of spending more time here, now that the internet makes it easier to stay connected. “A refuge in Sicily represented the possibility of rediscovering the quality of time, working in a more relaxed, creative, inspired way. Without the ups and downs of Milan, the pressure to deliver things,” Antonino continues. 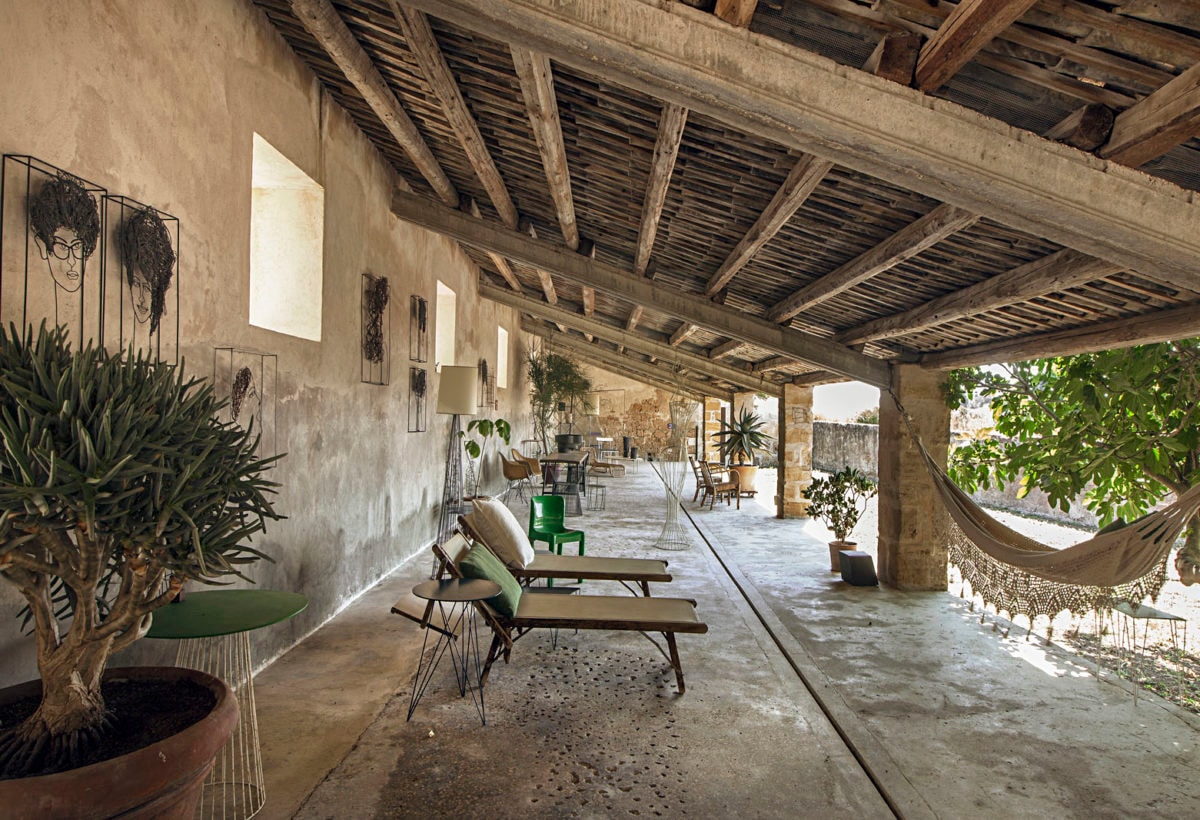 4
Photos: Mattia Aquila - The display space for the works of Sciortino and Zucchi created under the large shelter for livestock, now renovated and facing the courtyard.

With a very experienced architect and friend, Corrado Papa, they have shared in the adventure of making the house livable and comfortable, while respecting the spirit of the place. They had found a construction from the late 1800s, a sum of rural buildings that grew up spontaneously in response to family needs, with a fine stall for livestock around a courtyard.

The oblong building (about 60 x 6 meters) had been joined at the end by a residential structure, approximately in the 1950s (5 x 15 meters) on two levels. As a whole, it was configured with an L-shaped form with the two ends joined by a courtyard, a triangular space enclosed by a high masonry wall. And so it has remained.

The spaces of this rural complex face the courtyard and the surrounding lands, suspended over the mouth of the Tellaro and the old Roman site, refusing any relationship with the outside, guaranteeing absolute privacy that is reinforced by the presence of four magnificent blue jacarandas and a dense sequence of shadowy carob trees.

In the shed for the farming equipment on the ground floor of the 1950s structure, Antonino and Maurizio have set up their workshop. The first floor has living spaces (the guesthouse). “The workshop was actually the last thing we did,” they say, “because first we fixed the room where they made ricotta, then we did the space for olive oil, after which we worked on the stall, which is where we show our works to visitors today.”

In the first space of the long 19th-century building, for the entrance area, one day the roof collapsed. They made a daring choice: to lose volume and keep the space without a roof, bordered by dilapidated walls, full of Mediterranean sunlight. Now they let the intense blue of the Sicilian sky enter this outdoor living area, a place to organize starlight dinners for friends and clients. “A magic spell, a ruin inspired by the famous church in Palermo, Santa Maria dello Spasimo,” they explain. 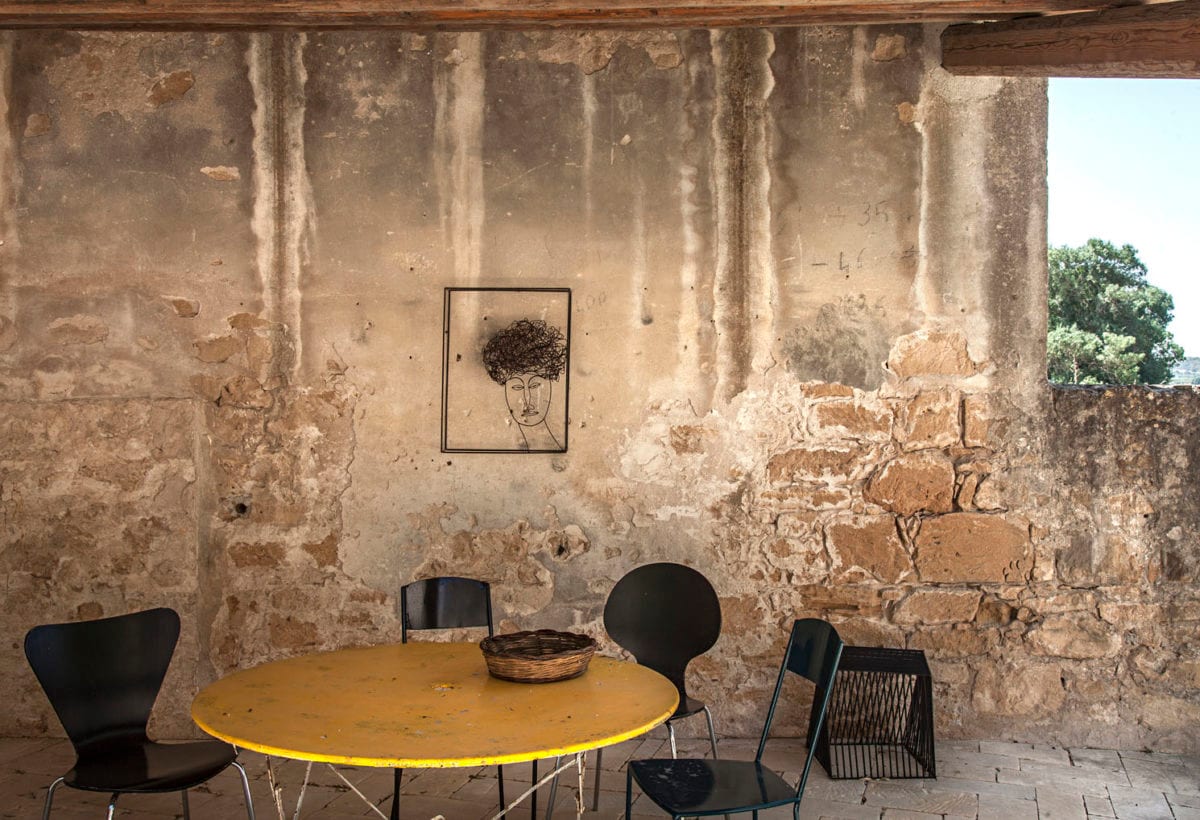 4
Photos: Mattia Aquila - Another corner of their microcosm of work and life, conserving the patina of time intact in the rugged walls bathed by Mediterranean sunshine.

The first room determines the overall alignment and a row of openings, perforating the entire long building at the center, forms a perspective view of 50 meters that concludes with the last segment of the stall. In this architectural skeleton, where many of the unfinished walls proudly display their wrinkles, the problem remained of insulation, and of making the different roofs suitable for new residential needs.

“When we intervened on the box from the 1950s, demolishing a horizontal suspended ceiling of reeds and plaster that separated the interiors from the attic,” the architect Papa says, “we unexpectedly discovered fine trusses that supported a traditional pitched roof composed of beams, wooden planks, roof tiles. Everything was permeable, without any separation between inside and outside. To conserve these parts we updated them, building a roof with a layer of insulating panels, a light plaster hood, and a surface of tiles.”

Gutted up to the trusses whose extension determines individual spaces without the need for dividers, the rooms have been enhanced by the fluid cut of the openings, and with uniform flooring in black  cementine tiles studded with luminiscent scales of volcanic stone. “I remembered a craftsman in Avola who still works as at the start of the last century, with an album of models and decorative motifs consulted by the architects of the Liberty style,” Papa continues.

“
I remembered a craftsman in Avola who still works as at the start of the last century, with an album of models and decorative motifs consulted by the architects of the Liberty style"

The simplicity of the house did not call for such refinement, but the quality of the intervention had to be safeguarded down to the smallest details. Therefore, otherwise, all the other floors of the old portion have been done with recycled local tuff, left rugged to take on a new color, exposed to the air.

“For the pavement of the courtyard,” Papa says, “the idea was to use some squared blocks of tuff from the walls of the building from the 1950s, placed horizontally in a herringbone pattern, a strategy with a certain narrative impact, creating harmony with the vague patterns of the limestone in the late 19th-century masonry.

Finally, to make up for the lack of a classic Sicilian balcony, on the first floor of the residential volume we have placed a sort of wooden tray supported by slim steel girders that run against the masonry structure.” A new lookout point for the agricultural plain, from which to enjoy the fresh air at sundown.