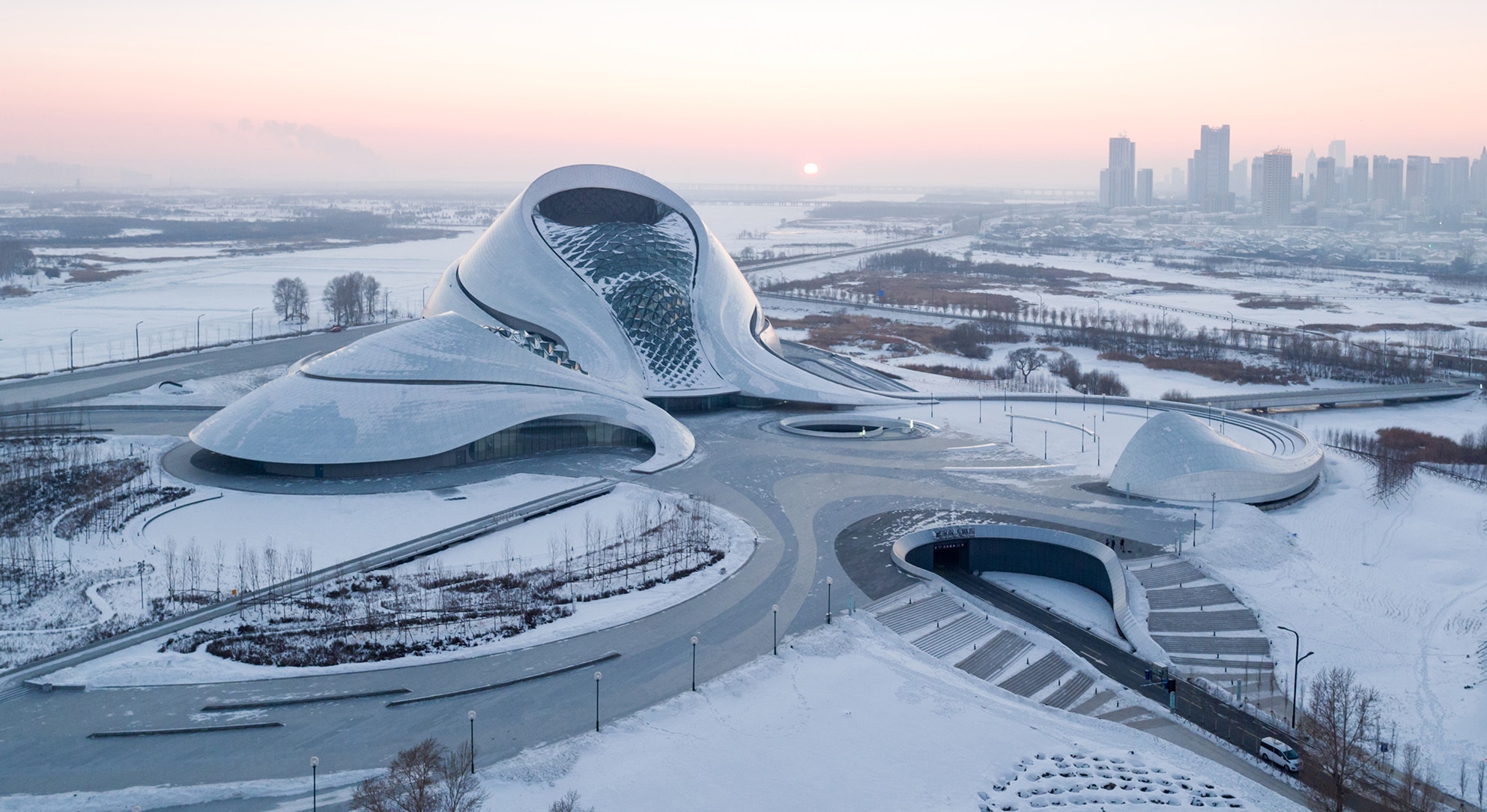 The result of an international competition held in 2010 to provide the city with a new ‘island of culture’, Harbin Opera House is at the core of a larger project for the landscape renewal of the riverfront zones and the creation of a cultural and convention center.

The idea of creating new cultural poles for growing Chinese cities (Harbin, famous for the festival of ice sculptures and now the eighth largest city in terms of population), once the basic infrastructures are in place, has been a basic choice of government planning on a national scale.

A series of design competitions, also in the logic of public-private participation, have been activated all over China, producing new theaters, libraries and cultural incubators (see the Poly Grand Theatre by Tadao Ando in Jading District, Shanghai, INTERNI, September 2015).

A segment of this national strategy, Harbin Opera House, designed by the studio MAD as the result of a competition, becomes a new symbolic place for the city, a tribute to its exponential growth through culture and music, while upgrading the riverfront, where nature is seen as a context for leisure.

With respect to other projects in this field that more or less successfully take the path of the landmark, with monumental and spectacular buildings set down in very confused urban settings as a way of making order, the Opera House of Harbin takes the path of compositional and design research followed on many other occasions by MAD, with the aim of blending architecture with the landscape, of making the constructed project an extension and at times a metaphor of the natural context that hosts it, though without sacrificing a contemporary character, and without facile botanical-floral camouflage.

For this project, the topography of the river zone, with its two bends and natural curves, suggested an overall solution. The two emerging sculptural volumes are like artificial hills of different heights, containing a hall for 1600 viewers and a smaller theater for 400, whose stage opens with a large glazing to the outside, which can thus be used as a real setting, showing the seasons and the colors of the time of year.

The two volumetric presences, perpendicular to each other and connected by the recessed fold of the central entrance, form the fulcrum of a large raised plaza bordered on the opposite side by a slender curved volumetric sign that defines the public space and its size.

The vehicle, service and visitors’ entrances and parking facilities are organized in the space below, reached by pedestrians directly from the staircase that emerges from the irregular elliptical opening placed near the main entrance.

The whole complex abandons the traditional hierarchies of main and secondary facades and roofs, to unite everything in a single enveloping surface. This is clad with large glass portions, deployed to capture zenithal sunlight, wrapped by white insulated aluminium panels that in the long winter months, when the landscape is covered with snow, transform the Opera into a true extension of the site, underlining its value as a work of “land architecture.”

Inside, as in a large cavern shaped by time, visitors are welcomed in the entrance by a landscape designed by other architectures; those of the theaters, like tall sculptural masses covered with a skin of ash wood from Manchuria, whose organic forms, responding to those of the outer enclosure, return in the concert halls, creating exceptional acoustic settings.

Nearby, the cultural and convention center is still being completed, also with a hotel, in keeping with the same philosophy as the Harbin Opera House, and becoming a complementary feature of the design of a new natural and architectural landscape.