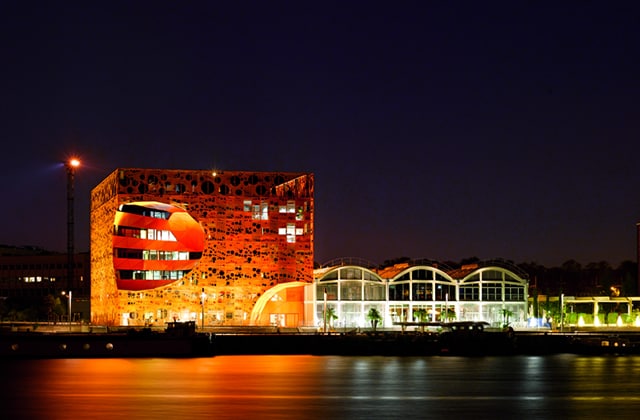 In Lyon, a building for offices and retailers, newly built on the banks of the Saône and inserted in a project of renewal of the site: a work of architecture that makes research on color and a sensitive skin the material for synaesthetic experimentation.

The multiple views on the banks of the Saône River, in the postindustrial context of the docks and industrial buildings of the old port, amidst sheds with names that reek of experience and a tough atmosphere, la Sucrière, les Douanes, les Salins, la Capitainerie, around the vision of the ‘orange cube’. Le Cube Orange, headquarters of the Cardinal real estate group and the RBC showroom, designed (2005-2011) by the French architecture studio Jakob + MacFarlane and developed by VNF (Voies Naviguables de France) in partnership with Caisse des Dépôts and Sem Lyon Confluence, is part of an important renewal program for this zone. Its new facades are arranged like a plot of pixel patterns in a rusty orange hue. A skin whose chromatic finish is similar to red lead paint, the traditional rustproofing used in port areas to stand up to humidity. It certainly does not allude to the physical decay of the material. “In fact, everything is designed to reproduce the fluid movement of the Saône with materials of the latest generation, laserperforated aluminium panels with a special thermal paint finish”, the designers explain. The examples of renewal of waterfront areas abound in international cities. Just consider the Marina Bay Sands in Singapore or the Shanghai Port International Cruise Terminal, concrete design opportunities aimed at revitalization of territories with different specificities. The added feature of this experimental architecture has to do with the sensitive treatment of the material and color of its skin, which become a set, key elements of narrative space, expressions of a relationship between open and closed portions. The two large openings in the wrapper, which ‘bend’ the regular structural grid (composed of concrete pillars with a height of five floors), and the staging of a surprising facade toward the river, represent the key points of the composition. The larger one forms an irregular tunnel that from the outside reaches the roof terrace, conveying all the potential of a transformation of material that encounters light and air. And not a wall. With an eye on creating an effect of emptiness, Jakob + MacFarlane have worked on a more detailed series of perforations or “mathematical disturbances”, subtracting mass in the form of three “conical” volumes on three levels: at the corner of the facade, on the roof and at the entrance level. This was a creative way to expand the internal space, to alternate the sense of the border and to provide unusual views outside, establishing a game of connections that are also rhythmical pacing, perceptive synaesthesia, sensory contamination. “These disturbances”, the designers explain, “produce very dynamic spaces and relations between the building and its users. The first establishes a direct visual relationship with the arch structure of the hall that functions as a buttress at the point of connection to the industrial shed with three bordering spans. The second is elliptical, and interrupts the regularity of the orthogonal load-bearing pillar-beam scheme at the corner of the new facade, forming the continuation of a large atrium created diagonally in the depth of the volume. The elevation, then, in this portion undergoes a slippage inward, where with the help of a series of balconies and walkways developed at different levels as connections to the office spaces, it lends itself to a highly mutable perception of geometries and views, depending on the vantage point of the observer. On the upper level the large terrace created on the flat roof completes the scenario with a large, spectacular viewing platform overlooking the city”. The RBC showroom is on the ground floor; reprising the same linguistic approach used for the architecture of the ‘cube’, it is conceived as an explicit fragment of the facade-window. “It encloses a symbolic ‘river’ in three dimensions”, the designers say, “that is translated into the long display wall with an L shape, cut by 60 ‘alveoli’, each unique in terms of size and geometry, to contain selected design pieces, giving a specific interpretation to each. The ordering element of the space, the wall unfolds and borders the path from the spectacular entrance to the more intimate spaces, open to the view of the river and defined by islands for the display of furniture and objects. The workspaces in the offices are bordered by platforms based on characteristics of transparency, light and viewing of the landscape outside. Because in the end everything operates in an inside-outside dimension, which starting with a special skin finds new potential for mutual interchange.