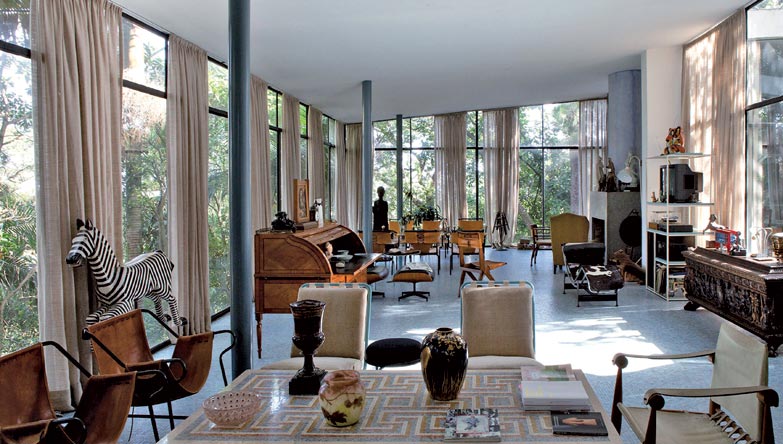 Over half a century of life, though it doesn’t show.

The building, in fact, looks like it was made yesterday, due to its modern style, the expressive force of its volumes, the courage of its choices: a chest of concrete and glass, pierced by light, suspended in a tropical forest. Lina Bo Bardi designed and built it back in 1951, when together with her husband, the art critic and historian Pietro Maria Bardi, she decided that Brazil would be the country where she would live and work. She was 32 and left Italy behind, with the studio of Gio Ponti, the magazine Domus (after sharing the position of vice-editor with Carlo Pagani), and all her intense professional activity, which had brought her into close contact with the protagonists of the Italian cultural renaissance, from Bruno Zevi to Elio Vittorini. But it was in Brazil that Lina found her creative energy and happiness: so it was logical that she soon felt the need to build her own house. Immersed in the flourishing vegetation of the Jardin Morumbi, a large nature reserve “wrapped in a great silence, full of wild animals, including gorgeous snakes,” as she wrote, Lina designed and built the “Casa de Vidro” where she would always live, together with her husband. Today a restyling documented by a video made by the director and architect Tapio Snellman (www.internimagazine.it) and a photographic installation by the London-based artist Ioana Marinescu (an Interni exclusive), reopens the spaces of the house to the public, while also welcoming the extraordinary archives of the works of Lina, as the headquarters of the Istituto Lina Bo & Pietro Maria Bardi. We met with the director, Prof. Renato Anelli, who has taken care of this immense legacy of drawings (about 7500) and photographs (17,000) that document the work of Lina in Brazil for many years. The opportunity: the presentation, in January in London, of an unusual collaboration between the Institute and the company Arper, which has found a precious connection with the values of the design, stimulating a philanthropic project. The Treviso-based company, in fact, has industrially produced 500 specimens, in a numbered edition, of the Bardi’s Bowl Chair, the piece designed in 1951 to furnish the ‘Casa de Vidro’ (and never put into production), to promote the exhibition “Lina Bo Bardi: Together.” Starting in London last year, the show has already visited several European capitals, and will reach Milan in September. Professor Anelli, this is an important opportunity to spread the word about the work of Lina Bo Bardi… “Indeed. And there’s more: part of the proceeds from the sale of the chair will also be donated for the socio-cultural programs of the Institute, especially for young people. Just as Lina and her husband desired.” So the Bardis were behind the birth of a foundation? “Yes, in 1989-90 they both had a strong desire to make a foundation that would promote Brazilian culture, especially in architecture and the arts. Of course funds were needed, so they decided to sell some paintings by Goya that were part of their private collection. The Institute was formed, and it was called Quadrante, as a tribute to the magazine Pietro Maria Bardi had directed in the 1930s in Italy. Then, when Lina passed away in 1992, the name was changed.” What teachings has Lina left behind, through her Institute? ““A great, authentic desire to break down the boundaries between art and life, artist and audience. Throughout her career, Lina was always amazing for her versatility – she was an architect, but also a set designer, a fashion designer, a curator of exhibitions, and a writer of essays. She wanted to mix these different professions because she wanted to offer everyone, and I emphasize everyone, a true opportunity to get closer to culture, to art and to happiness. In Lina there is no trace of any difference between popular culture and high culture: all her projects – one emblematic case is the SESC Fabrica da Pompéia recreation center – were aimed at bringing art into life and life into art, overlooking divisions of social class or age.” In short, you are saying that Lina devoted her work to everyone… “Yes, to young people, children, senior citizens: ‘all together,’ as she wrote, a term that has become the title of the exhibition on her work: Together.”