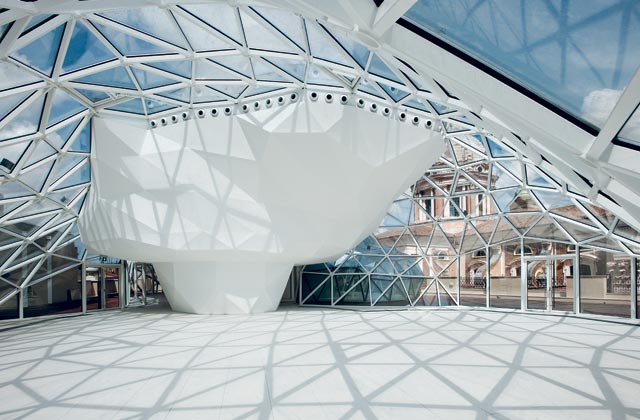 A gigantic transparent bubble, a theatrical escamotage, amidst the picturesque rooftops of Renaissance Rome with its baroque domes.

The impressive steel and glass structure that has ‘touched down’ like a UFO on the roof of the austere late 19th-century building of the former Unione Militare, between Via del Corso and Via Tomacelli, created by Studio Fuksas, is designed to grab attention. Controversy always accompanies design intervention in the historical fabric of the city, a delicate context, especially when the grafting is in a contemporary language, with a forceful character, applied to the renovation of a building of 6000 m2, commissioned by the Benetton Group (and then sold to the Swedish trademark H&M, ed). The determination to establish a dialogue with the history of the architecture of places, even in difficult conditions, sustained by an apt vocabulary of forms, materials and technologies, has always been a feature of the work of Massimiliano & Doriana Fuksas, along with the courage to make clear choices. The fluid forms of the new ‘bubble-cloudcupola- lantern’ roof impose reflection on the impact of the sign in the context, the balance between old and new, the new harmonies and perspectives generated. While the new presence undeniably takes on the expressive role of another iconic sign in the urban skyline – alongside the baroque dome by Pietro da Cortona from 1669 for the Basilica dei Santi Ambrogio e Carlo al Corso – it is also clearly not just a grafted figure based on the desire for spectacle. With its complex triangular geometry, a solution based on performance, the sculptural bubble indicates new ways of using and narrating space. It is not just an end in it self. It has the function of a panoramic space of about 300 m2, 7.5 meters high at its peak (where a restaurant-cafe will be installed), vibrant with natural light in the daytime, and with changing color effects, like a great lantern, at dusk and at night. In its overall compositional development, it extends from the ground floor of the building – with facades salvaged thanks to a project of lighting design – and crosses all four levels, enclosing the nucleus of vertical access, service zones and some of the physical plant elements of the new flagship store, becoming a dynamic ‘pivot’ opening along the structure of the various floors, interconnected by walkways. “In technical terms, we have experimented with the innovative technique known as top-down,” the architects explain. “In other words, the existing slabs have been completely demolished and reconstructed, from above to below. The new ones, composed of metal beams up to 24 meters in length, are supported by eight steel columns arranged at the edge of each floor, completely conserving the perimeter walls.” This precious framework encloses the light in successive planes, which in keeping with the Benetton style are marked by different colors conveyed by the floor, decorated with red, orange and violet ‘bubbles’ of different sizes, and by suspended ceilings that ‘light up’ in a corresponding chromatic range. The furnishings, from the tables to the desks, the display fixtures to the ‘tops’ for garments and accessories that open up like fans, all designed by the architects, are like “playful features based on children’s toys” that pursue balance, lightness and softness through punctuation of liquid matter. Like art installations, these sculptural presences in shiny white fiberglass are reflected in oval mirrors that expand the sensation of the lights and colors in the spaces: an evanescent miscellany that feeds on theatrical counterpoint in the staircase connecting the levels, with glass and mirror steps, lit by LEDs. In the end, precisely the furnishings seem to configure other metaphorical spatial ‘bubbles,’ each different from the next. The Fuksas duo, based on experience in the design of high-level stores (just consider the Armani flagship stores in New York, Hong Kong and Tokyo) and private/public facilities (from the Nardini Research Center and Auditorium at Bassano del Grappa to the recent New Convention Center at EUR in Rome), keeps on surprising us with special effects. In this case, the coup de théatre on the ground floor is conceived to host a bazaar of objects, colors and accessories, an authentic gift for the gaze: the glass floor offers glimpses of the archaeological remains of a burial monument in volcanic stone and Travertine marble, dating back to the first half of the 2nd century BC, and revealed by the preliminary excavation work. As if, under the skies of the Eternal City, the physical-mental dialogue of the bubble-lantern on the roof had begun right here.