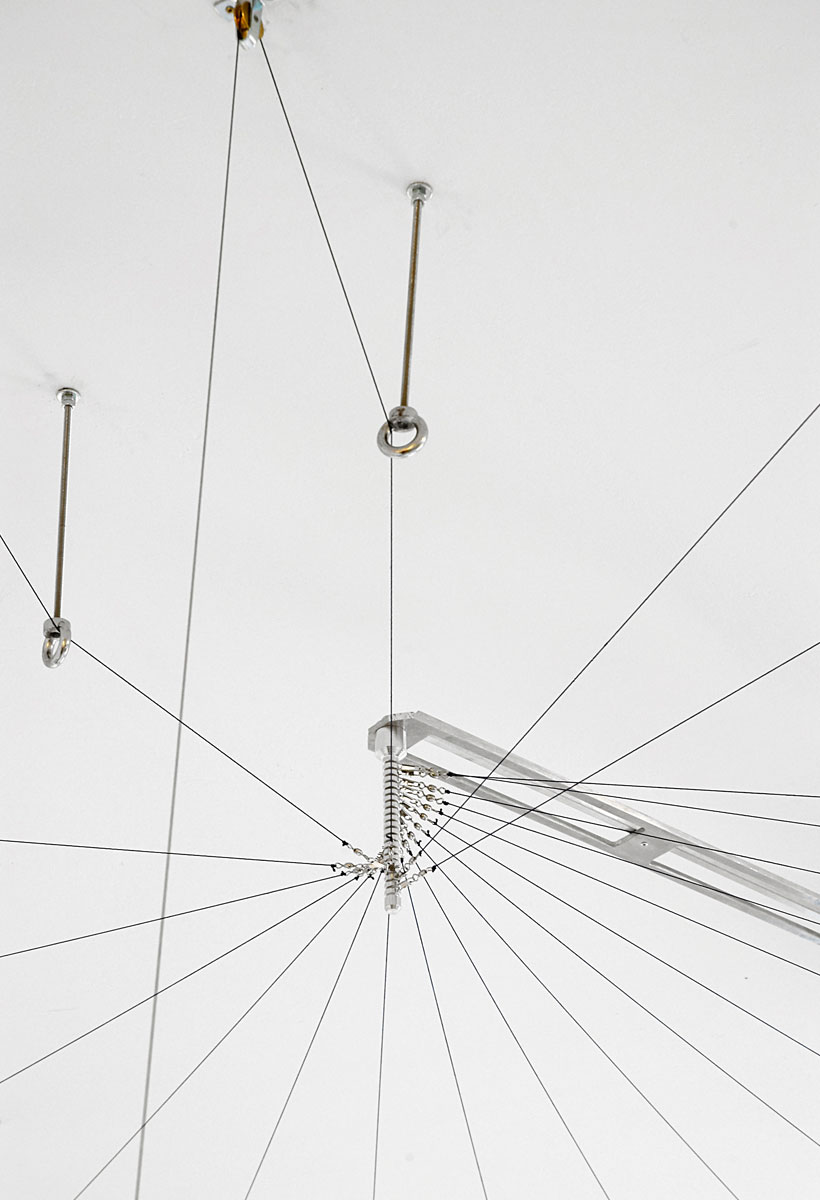 From the design of things to that of the machines that make them: a choice made by many contemporary designers. With different techniques and materials, but with a shared vision: to experiment with alternatives to increasingly standardized production methods

If, as someone said, to design is the only way to avoid getting designed, then designing machines is perhaps the only way to create products that are not standardized and monotonous. To invent technical methods, in fact, has always been a challenge for artistic personalities who put their vision first, notwithstanding the available means.

Because only if one is ready to be guided by a visionary goal can efforts be concentrated on how to achieve it. History is full of illustrious examples, starting of course with the machines of Leonardo, passing through the poetic “cloud machine” of Nicola Sabbatini (1638), all the way to the brilliant method designing catenary arches with a funicular model invented by Antoni Gaudì for the Sagrada Familia, or the Kazam Machine of Charles & Ray Eames for shaping plywood.

In recent history we can also often seen a shift from the design of things to that of the machines that make them. This choice is not only a matter of familiarity with technological means, or a calling for mechanical engineering. The experiments seem to share a line of reasoning, based on different motivations. In a period that is making technology more and more democratic for its users, designing one’s own means of production sounds revolutionary, like a rebel yell against standardization and its consequences. 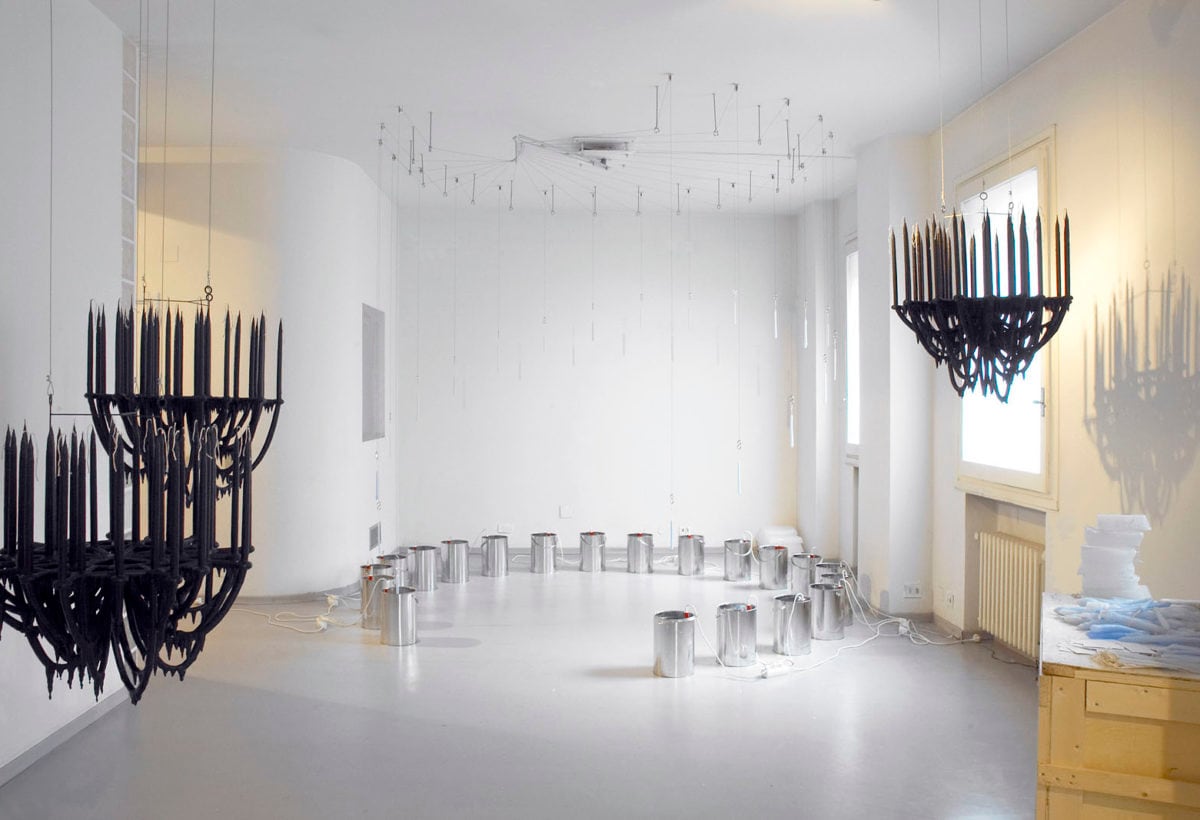 Some of the most active exponents of this approach are Tim Simpson and Sarah van Gameren of Studio Glithero. For about ten years the Anglo-Dutch duo have adopted a method that borrows some of its reasoning and much of its spectacular character from performance art. Their projects tell stories of ceramics that are photo-imprinted by light, borrowing a different way of approaching decoration from darkroom techniques; or they make textile elements that function like the punch cards of antique organs. They also make candles, live, before the eyes of the user/viewer, thanks to gigantic mechanisms that have the seductive appeal of technical miracles.

In fact, “Miracle Machines and the Lost Industries” is the title of a booklet they wrote in 2008, conducting research on machinery and the magic of its workings. The crux of the method is engagement with the public, which becomes a direct witness of the making, almost as an antidote to industrial alienation, even in the post-Fordist era. In the essay they formulate their manifesto: “The machine will perform; the machine will create a product; the work will have an audience; the work will be accessible to all; the work will be understood by children.”

The projects of the Vienna-based duo mischer’traxler are also close to this logic. To exploit natural light and its fluctuations of sun and shadow to nurture production is a message of return to a more humane, biological way of making. It means producing in the way a tree produces its leaves, instead of the way industry makes its goods. Getting back to the biological world does not mean reproducing natural forms, but studying processes of growth to take them as a model for artificial machines that do not go against nature, but bring out its potential. Thus the idea is to ‘cultivate’ jewelry and objects through machines that function more like incubators than like robots. 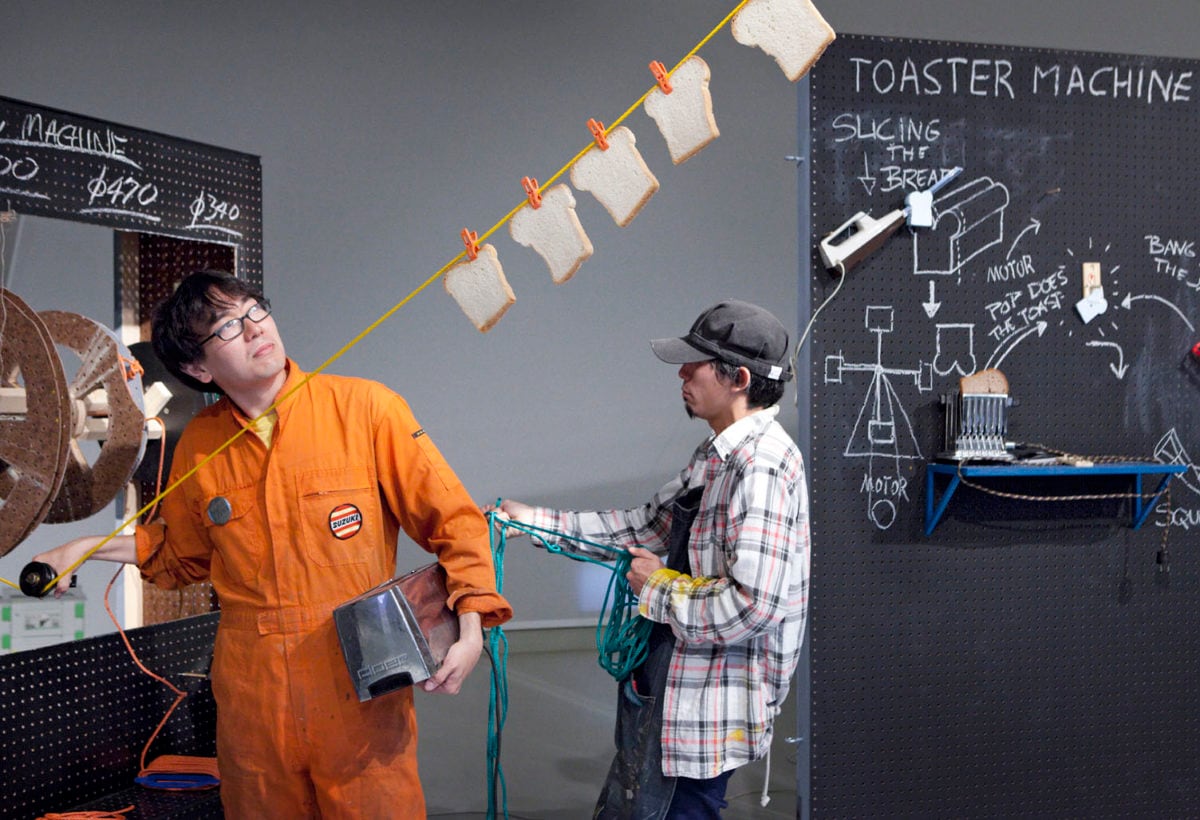 4
Photos courtesy of Johannes Abeling - Yuri Suzuki, Breakfast Machine, Platform 21, 2009. The Japanese sound designer has always worked on the construction of devices that reveal the sonic potential and even musical qualities of mechanical tools.

Designing machines can also mean using a mechanical language to underline certain aspects of things through an immediate, intuitive impact. This is the case of Raw Color, another duo (both Dutch this time) that applies common technological mechanisms to stage the concept of chromatic dynamism. Simple fans or document shredders can become devices in a performance that explores new paths of color perception through colored rain or chromatic marks in centrifugal motion.

The work of the Japanese sound designer Yuri Suzuki also involves mechanisms and gears, investigating new timbres starting with mechanical processes. His Breakfast Machine seems like a creation worthy of the most imaginative inventors, and his projects often make use of low-tech or obsolete machinery (old computers and video games, very out-of-date digital supports). He conserves the voice and sound of machines in a 2.0 version of objectual animism, the acoustic memory of the victims of technological obsolescence, while also generating a different sonic interaction with the world of machines. His speculation actually has nothing nostalgic or reactionary about it. In world that imposes constant upgrades of technology, it becomes very interesting to establish contact between mechanical realities that are close in time, yet distant in purpose.

For example, the Chilean studio gt2P (great things to people) investigates the meaning of the passage from analog to digital, in an almost disorienting overturning of roles. They have built a rudimentary handmade ‘machine’ to make parametric forms without the help of a computer. A graduated wooden guide marks abscissae and ordinates to make a curvature that will also depend on the density and weight of the raw material utilized. The results are works of crockery whose complex and jagged curves can easily rival those created with the most advanced CAD systems.

Once again, the point is to govern the machine, instead of being governed by it. Disciplines, intelligence and the senses are so open and variable that no technology imposed by the market can ever fully restrain them. All the research projects described above prove that there is no need to look too far beyond what is around us or inside us, in order to find new paths. To discover that in the end the most amazing technological machinery has been with us all our lives: the body.