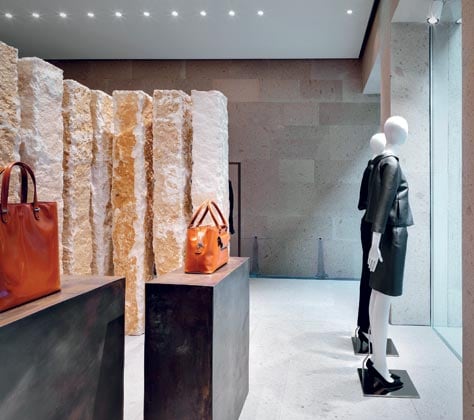 The meeting of two worlds, for Giada – the Italian clothing brand, with Chinese ownership – dates back to 2005, when Rosanna Daolio, founder and head designer, made a strategic partnership with RedStone Haute Couture of Yizheng Zhao, a Chinese company specializing in the marketing of luxury brands. Today Giada, founded in Italy and developed in China, has come back home. To Milan, Via Montenapoleone, the perfect location. “I’ve made the dream happen. In the face of the business, I have defended the quality of Made in Italy, its rigorous taste and artisanal know-how, combining it with the Chinese entrepreneurial vision. Creative design and research-development of the collection, which includes women’s garments with a minimal but not severe look, and chic accessories with a cosmopolitan spirit – they were and are, in fact, Italian; the fine natural fabrics are produced in Italy by Loro Piana, Lanerie Agnona, Lanificio Luigi Colombo, Luigi Verga, and others; the handbags, footwear and small accessories are made in Florence,” the fashion design born in Reggio Emilia, trained in the Max Mara group, with her own studio in Milan since 2000, explains. The first flagship store in the heart of the fashion capital was opened in September, with architectural design by Claudio Silvestrin, a name that requires no introduction on the international design stage. Not just because it was hard to resist the charm of his experience with the boutiques of Giorgio Armani, but also because his vision of architecture as a visual poem always takes on new, enticing forms. “I wanted to imagine a space without traditional furnishings like chests of drawers, tables, cabinets, with forceful materic presences, where the architectural signs would convey a sense of durability over time. In perfect tune with the values of Giada,” says the Italian designer based in London (and the world). His architecture – strong but not aggressive, luxurious but not ostentatious, tactile and made with great attention to detail, an austere setting for clothing certainly not created for fashion victims, is expressed as usual through a few selected materials and orthogonal geometries influenced by Fronzoni, to focus attention on the materials and the workmanship, the precious fabrics and linear silhouettes of the garments. A shared DNA. Dolomite stone, cast bronze, natural cowhide and wood: the chosen materials are deployed in a homogeneous way in the spaces of the ground floor (53 m2) and the second level (155 m2) set aside for Giada (the third floor contains the showroom, while the first is for another brand). Like a treasure chest, in the monomateric setting dominated by the white porphyry of the walls and floors, which expands the visual perception of the spaces, the garments and accessories are enhanced by artfully scattered monolithic cast bronze display fixtures made by skilled craftsmen. The colors of the earth on the ground floor are combined with another element of a symbolic nature, adding great character to the place: water flows on the wall to the right of the entrance, in a cascade producing sounds that attenuate the noise of the city outside. This welcoming wall of water captures the gaze, like the totems in natural hewn mustard-colored stone, aligned with the suggestions of classical colonnades, which instead represent the fil rouge between the two levels of the boutique, connected by a marmorino staircase in the same tone as the white porphyry. The balanced counterpoint of natural cowhide used for the dressing rooms, the dark brown doors and the elevator leading to the second level, which also contains the VIP room, complete the set, adding soft warmth to the spaces. The next step: to occupy the whole 19th-century building on Via Montenapoleone, from the ground floor to the fourth floor. The dream of Giada, then, is just beginning.