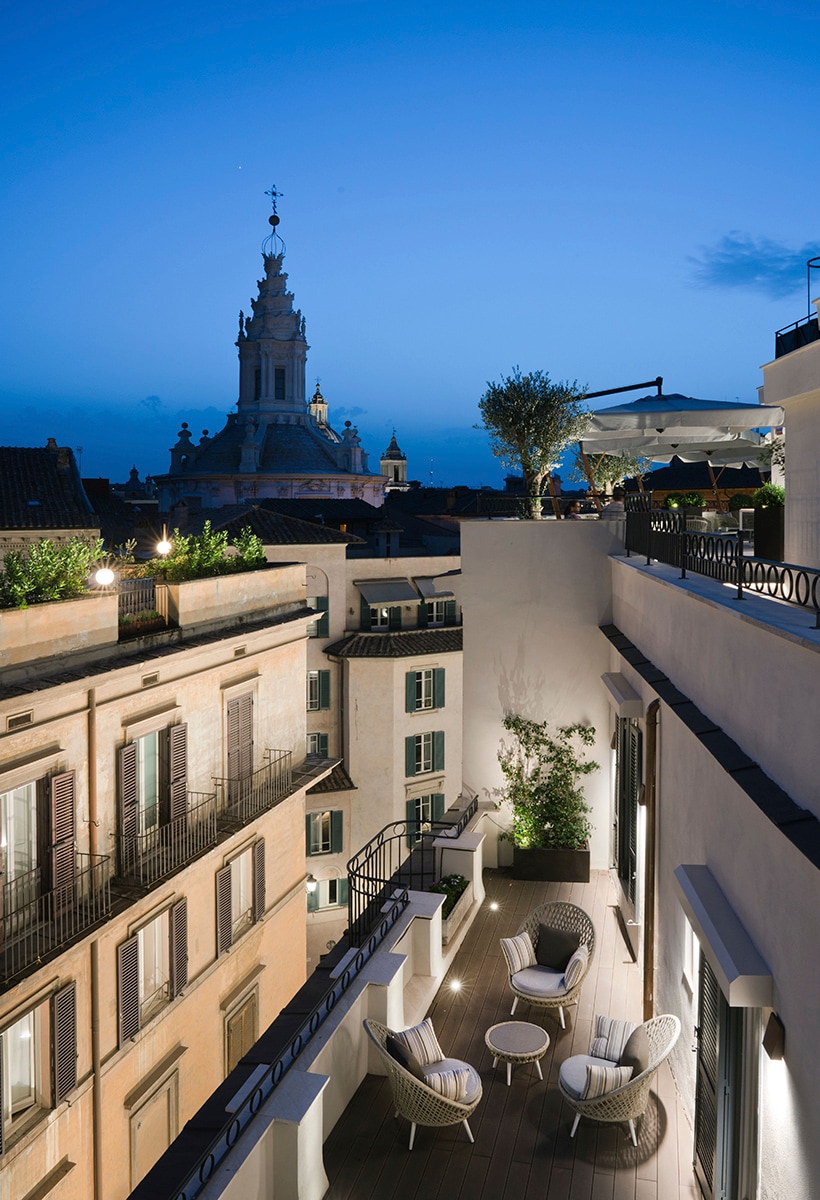 An erudite, ethereal Eternal City atmosphere reigns in this five-star facility of Autograph Collection Hotels (part of the Marriott International group). In an enviable location near the Pantheon – hence the name – the Pantheon Iconic Rome Hotel has been designed by the Milan-based firm of Marco Piva, which on a tight schedule – 11 months from the idea to the completion – has handled the restoration, restructuring and interior design of a historic building on via di Santa Chiara, which was first a hotel and then contained the offices of the Italian Senate.

“To grant this place a new life, after having stripped it back to the structure, recovering and restoring the pertinent parts, I drew inspiration precisely from the historical and architectural heritage of ancient Rome, especially the geometry, light and materials of the nearby temple,” says Piva.

°
Exciting, fluid, functional.This is the language that distinguishes Marco Piva’s architectural creations, product design and interior design. The effort in material research and technology, the value of differentiation,the design innovation, lead the establishment of Studiodada Associates, whose production becomes one of the most representative of the period of Radical Design. In the ’80s opens Studio Marco Piva, whose work ranges from large projects to architectural interior design, to industrial design. A traveller and a designer, an innovator who is educated in rational approaches, Marco Piva studies and creates design solutions which are pervaded by stylistic freedom and compositional sobriety.

Circular forms, arches and vaults, marble and stone, brass and bronze, together with skillful use of light, are the key elements of a contemporary setting that prompts a sense of surprise while paying homage to the cultural, aesthetic and emotional identity of a site that shifts its appearance with the changes of the very special light in Rome.

Material is the true protagonist here. Starting with the lobby, where the arches of the galleria-promenade leading to the elevators and staircases are made in bronze, and contain an LED lighting system that creates a classic effect in the entire ground floor area, reflecting on the uniform flooring in polished Sahara Noir marble. 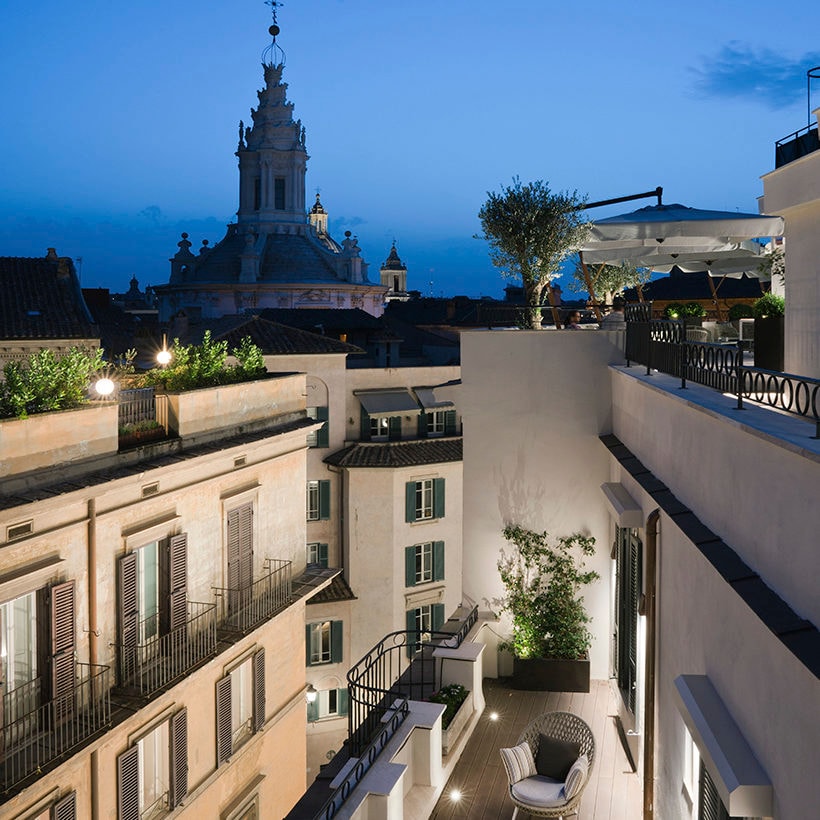 9
The hotel is organized on six levels, five of which contain the rooms, joined by a lower level and a roof terrace. The latter, in the image, offers a splendid view of the surrounding rooftops and the domes of the Eternal City. The furnishings and outdoor flooring are by Atmosphera.

“Light is generated by the forms of the structure, while several chandeliers provide iconic luminous objects to add character to the communal spaces such as the gourmet restaurant and the lounge bar,” the architect explains. The relaxing, welcoming atmosphere of the public spaces on the entrance level, including a restaurant (the second one is on the sixth floor), is enhanced by the presence of a small bar featuring a circular lighting fixtures not unlike the upper oculus of the Pantheon.

The rooms on the five upper levels are based on a concept of maximum personalization, offering spectacular views of the Pantheon, Piazza Sant’Eustachio and Via di Santa Chiara. Each of the 79 rooms, including 20 suites, is furnished with custom items. The wardrobes, for example, are minimal, autonomous units, grouped in vertical blocks on a shared base, like columns on a single foundation.

It goes without saying that great care has gone into the design of the exclusive coverings and the choice of materials and colors, as in the bathrooms which play with the texture of traditional stone ‘crafted’ by time, in a juxtaposition of marble and glass. 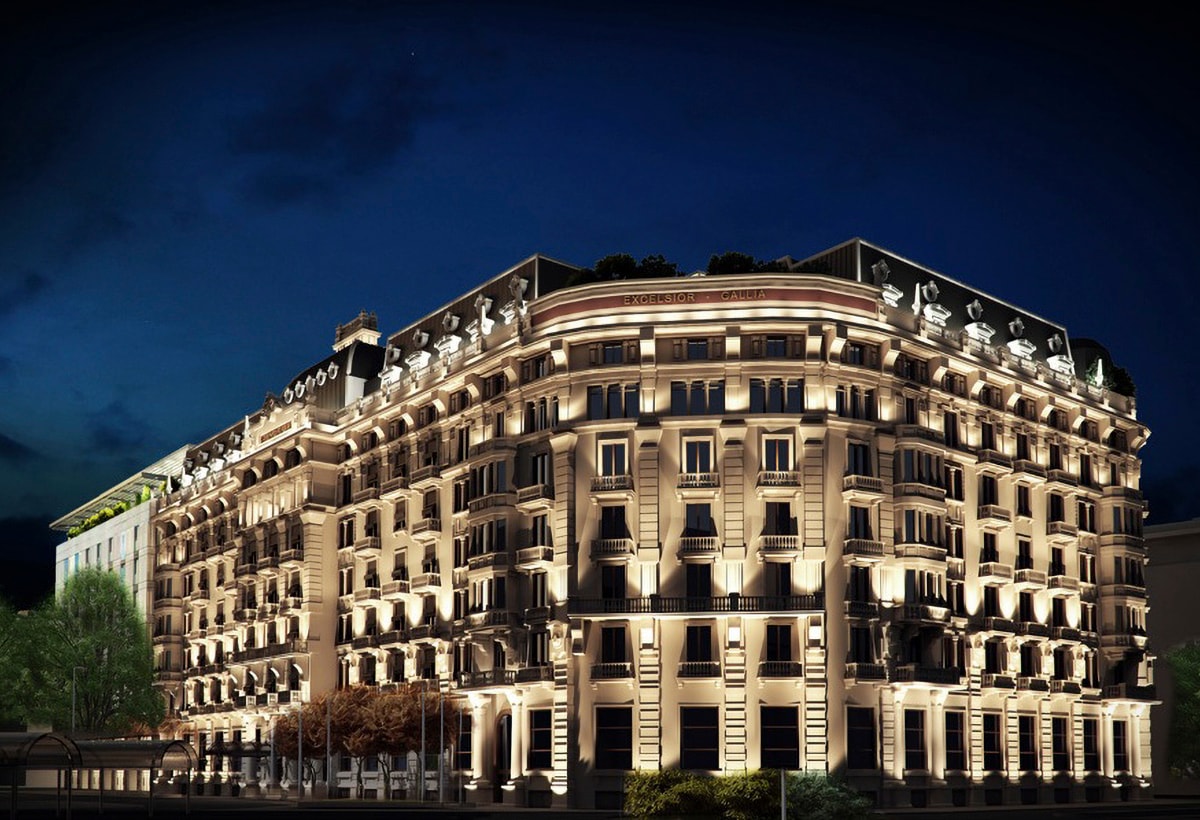 3
Some architectural projects curated by Studio Marco Piva. The renovation and expansion of the historic Excelsior Hotel Gallia, in the heart of Milan, is part of the broader process of urban redevelopment of Duca D’Aosta Square. The plot design is inserted in the process aiming the refurbishment of the overall area surrounding the Central station. The new architectural design developed by Marco Piva configures a complex where the historical building, fully restored, is joined to a new contemporary designed building. The main aim of Studio Marco Piva is to combine hotels’ requirements, internationally oriented, keeping the key brand elements of a city like Milan: style, fashion and design.

Every suite features selected works of art created for the occasion by Marco Piva, inserted in special glass cases, as well as objects related to cultural events in Rome, exhibitions in progress, immersing guests in the historical and contemporary spirit of the city.

The luxury experience also includes culinary offerings supervised by the chef Luca Ludovici, in a setting of excellence. The Dionysus restaurant on the ground floor is organized under a vaulted ceiling, enhanced by exquisitely crafted art objects of local origin, with an open kitchen displayed by means of an LED glazing that can become opaque on command, or left transparent to allow guests to observe the preparation of the dishes.

“
Light is generated by the forms of the structure, while several chandeliers provide iconic luminous objects to add character to the communal spaces such as the gourmet restaurant and the lounge bar."

On the sixth-floor rooftop the panoramic terrace hosts the Divinity Terrace Lounge Bar (50 seats, 30 outdoors) furnished with handmade sofas and armchairs: they represent the most forceful episodes of Marco Piva’s narration of the context, ranging from the surrounding rooftops to the many domes of the city.

In case of inclement weather, the same level provides an indoor area, with flooring in white statuary marble and a brass wall installation, which can be reserved for private events. A cool, flexible, dynamic place.