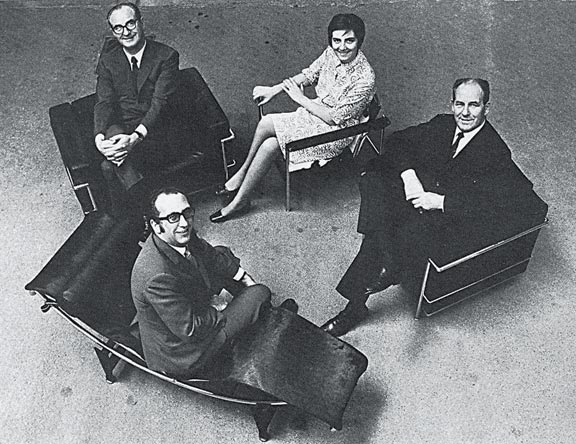 “A timely legacy of which we can make practical and daily intellectual use,” Ernesto Nathan Rogers said in 1965, when he introduced the first furnishing elements by Le Corbusier produced by Cassina, just two months after the death of the great architect of Swiss origin.

In spite of his place on the international architecture scene, in spite of his revolutionary ideas on the “Èquipement de la maison,” Le Corbusier was not very well known for his product design. It was not until Cassina acquired the rights, in 1964, to produce the models he had created together with Pierre Jeanneret and Charlotte Perriand, with an official presentation one year later, that the metal tubing furniture of Le Corbusier actually become what he had always hoped: ideal tools for living in a correct way, industrially produced and available to all. Destined to enter the collective imaginary as absolute icons of modern thought. But the tale actually begins much earlier, in 1929. In accord with the functionalist thought developed at the Bauhaus and inspired by the cantilever chair by Mart Stam, Le Corbusier decides to experiment with the making of furnishings that would be a concrete expression of their functions and, together with Pierre Jeanneret and Charlotte Perriand, he brings a series of furnishings to Paris, at the Salon d’Automne, whose main supports are in metal tubing. The series already includes certain ‘cult’ objects like the LC4 chaise longue LC4 and the LC2 square armchair. Precisely because of their innovative character, the response on the part of the public is far from enthusiastic. The designers were not discouraged, though, and through various agreements they tried to get their furniture into homes in real life. The first contract was with Thonet in 1930, but the results were slim, also due to the war and a number of hampering conditions. In 1959 the rights passed into the hands of Heidi Weber, a Swiss dealer and friend of Le Corbusier, who did not have the productive and commercial resources to make a true collection of industrial furnishings. Then, in 1964, came the encounter with Cassina: contacted along with other companies, the Meda-based firm was chosen by Le Corbusier due to its industrial capacity and the quality of its products. This led to the first exclusive licensing contract for the first four models, which finally met with an industrial-scale production process in 1965, thanks to technical innovations developed by Cassina, such as the process of bending of the tubular structure in chromium-plated steel, and the introduction of expanded polyurethane filler. Also thanks to the progressive internationalization of the company and its worldwide distribution, the furnishings of the LC Collection achieved planetary popularity. The LC2 armchair, which Cassina has chosen this year as the icon of the series, to celebrate its 50th anniversary, is the object sold most in the history of design, as well as one of the bestsellers of the brand. Even today – and until 2069, the 70th year after the death of the last of the three designers – the company from Meda is the only one authorized to produce the designs of Le Corbusier, Jeanneret and Perriand. A right that is also a cultural responsibility, involving constant study, research and development done in close collaboration with Fondation Le Corbusier and the heirs of the designers. Thanks to this effort, which involved supervision by Charlotte Perriand herself in the 1970s, Cassina has gradually introduced new pieces by the trio and by Le Corbusier on his own. The company has also made a series of product innovations that have gradually enhanced the industrial content of the furnishings, in a clear process of differentiation between the originals produced by Cassina and the endless copies that have appeared in recent years. The latest innovation, which the brand presents to kick off the celebration of the 50th anniversary of the LC Collection, represents a ‘green’ breakthrough. Out ahead of a change of direction other industrial sectors have been obliged to make, Cassina has decided to replace the use of hexavalent chromium with trivalent chromium in the production process of the tubular metal structures. A choice that guarantees a much lower level of toxicity of the chemical products utilized, as well as fewer emissions in the air and less toxic waste. Furthermore, the leathers have become totally organic, and a microfiber fabric will also be introduced, for lower environmental impact on the level of production. Finally, new colors and new details update the collection on a purely aesthetic plane. The intense historical research conducted by Cassina with Fondation Le Corbusier and the heirs of the designers has led to identification of a new chromatic palette, updating the original hues indicated by Charlotte Perriand in 1978. The new tones were discovered during analysis of the models found in archives and museums; the novelty of the headrest belt, crafted with saddlery techniques, comes instead from an earlier edition of the LC4 done with Louis Vuitton, making it possible to enhance the chaise longue, which is one of the most famous pieces in the collection. But the surprises don’t stop there. The Meda-based company will be the protagonist of other initiatives during the celebration of the anniversary, into 2015, the 50th anniversary of the death of Le Corbusier. To narrate a fundamental chapter of the history of contemporary design and to underline the value of authenticity of a story that – without Cassina – could have taken completely different paths.