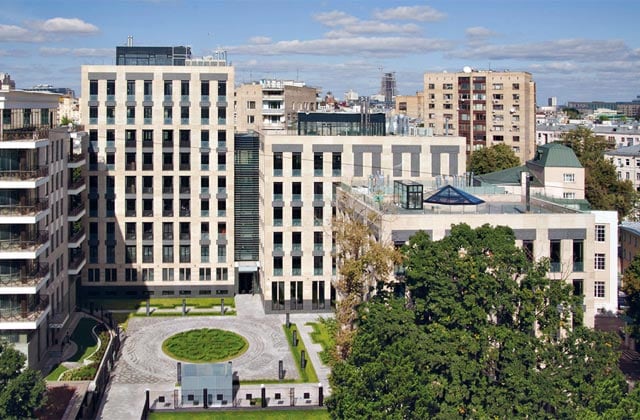 Granatny 6 explores the possibilities of a contemporary approach that includes a wealth of decorations offered as the architectural skin, establishing a dialogue between past and present.

The three architectural blocks with four, six and nine levels appear as precise volumes, marked by a regular grid of full and empty zones, highlighting a facade design marked by vertical openings that emerge against a light stone backdrop. The effort to create an urban design that goes beyond the monotony of the impersonal apartment buildings found on the outskirts of the city, the result of the years of ‘quantity’ and the response to immediate, pressing needs for urban growth, can already be seen in the urban microplan and in the variety of the heights of the buildings. But when one reaches the complex and enters the central court, the alternative character of the project becomes even more evident, offering a residential product that differs from the others on the real estate market (clumsy revivals with a smattering of orthodox modernism). The differences come from the choice of materials but also from the figurative approach, based on a combination of stone, iron and glass. The idea of Sergei Tchoban and Sergey Kuznestov is to combine the need for an explicitly contemporary design path with the flavor of a rediscovered, reinvented tradition, getting beyond the shortcut of stylistic revival, or the clumsy stylistic attempts seen in many other residential developments. The rich range of materials, technology and services is joined by the lucid design of the exclusive apartments (no more than two per level). The focus on privacy offers a guarantee of market success, but the real winning move is precisely the way of playing with memory, evoking antique decorative patterns that become an integral part of the construction, both outside and in the common areas of the buildings. The light stone that covers the fronts, alongside segments of darker stone used a floor markers to horizontally interrupt the vertical pattern of the paired windows, are subjected to precise, richly modular decoration that makes the overall surface look three-dimensional, transforming traditional motifs into an effective texture that absorbs daylight and accentuates bas-relief shadows. The stone is deployed together with burnished iron railings and screen-printed glass featuring the same motifs. The patterns also recur in the interiors. As in the entrance hall, whose rich decorative design is repeated on walls clad in stone and a ceiling of perforated metal, framing the elevators and creating a strong interior-exterior connection. The project, in the intentions of its makers, is a reinterpretation of the lesson of Andrej Konstantinovic Burov (1900-1957), the Russian architect who created, among many other works in Moscow, the Central House of Architects (1941), with an imposing Renaissance portal, quite near to Granatny 6. Burov’s legacy of compositional synthesis of the modern and the traditional returns in this contemporary project.