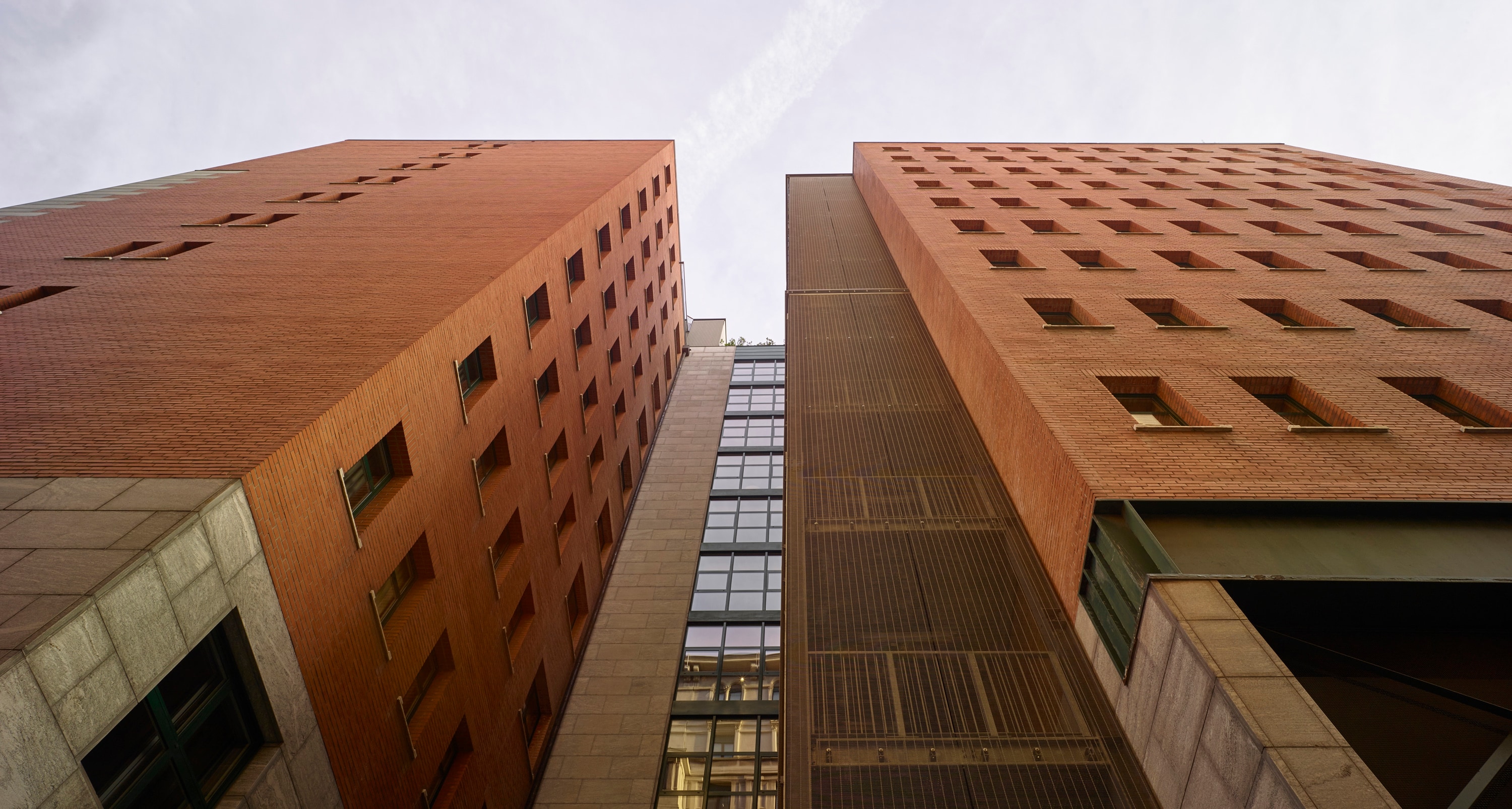 ME Milan il Duca, the hotel in Milan of the Spanish Melià group, opened in May, is inserted in a building Aldo Rossi renovated and expanded at the end of the 1980s, at the time of the World Cup of soccer.

For that project, the Milanese master described the image of the neighboring hotels as “mannerist architecture, substantially weak and already obsolete after just a few years […] built to satisfy the taste for technical invention.” A nearby architecture balanced between revival and stylistic copying, with a 19th century image that was clearly countered by Rossi’s work on an urban level.

The new image of the construction, conceived as an “edified block of remarkable importance in the urban landscape,” has a main facade in beola stone, preceded by a low volume with four powerful cylindrical columns in white Carrara marble, paced by five pilaster strips bordering dark green metal openings.

The upper levels are in terracotta, like the sides and the block added at the back, facing Via Marco Polo, defined as a work of “rational architecture in brick with regular openings for the windows.” In the 1990s it seemed anachronistic to see how the interiors (not done by Rossi) of this rigorous work of architecture for the city were developed, in a jarring contrast, with a ‘Baroque period image,’ in keeping with the figurative standards of the hotel chain, completely alien to the intentions of the architectural enclosure.

The project done today by Arassociati, a studio composed of former students and collaborators of Aldo Rossi, together with Nicola Gallizia and Alvaro Sans, have brought this work back into the contemporary world, reinventing its spaces in keeping with new lines of intervention with respect to the grammar of Rossi, full of invention and sensitivity, also with respect to the history of Italian design, which along with a careful selection of custom furnishings, is featured in a harmonious and meaningful way, underlining the vitality of historic pieces that are still in production today.

The hotel has 132 rooms, including 34 suites, a new garden with a central pergola on axis with the entrance on the ground floor, and an existing terrace on the roof of the low protruding volume, set aside for the two presidential suites on the first floor.

A new roof garden with a breakfast zone and sky bar has been installed, surrounded by large terraces; the new volumes set back from the facade, glazed and light in composition, do not alter the original profile, which has been enhanced by the new project.

To reach the panoramic level at the top, in compliance with regulations, a new external staircase is positioned in the recessed lateral space that marks the connection between the existing building and the addition. Here the staircase is like a monolithic metal volume clad in a dense pattern of horizontal steel strips; an element of vertical grafting that comes to grips with the exposed brick exteriors.

In the entrance on the ground floor a new elliptical staircase in bronze-finish metal has been built to replace the existing one to the left, facing the bar and the lobby, offering direct access to the STK Milan restaurant. The entrance to the reception area is underlined by two walls composed of undulating wooden partitions that create a sculptural path towards the black marble counter that presents, at its ends, two exceptional lamps: a pair of gold Atollo models by Vico Magistretti, Compasso d’Oro 1979.

Two ‘timeless’ design pieces that are joined in the lobby and the library zone by other classics of Italian design, like the Elettra by BBPR (Arflex), armchairs by Gio Ponti recently reissued by Molteni & C, which has produced all the custom furnishings for the hotel, which blend nicely with the historic pieces.

The idea of using certain icons from Italian design history, connected with the Milanese context, to offer a sort of active and interactive museum, continues on each landing of the elevators, with marble mosaic flooring (Fantini Mosaici), thanks to a selection of signature armchairs placed in pairs to represent the varied identity of a completely Italian history.

Together with the design pieces, several lamps have been created for the occasion, produced by Oluce, like the circular appliques in the corridors and the table lamps in the hotel rooms, where the design of the furnishings again mingles with historic items like the Montecatini aluminium chairs by Gio Ponti (Molteni & C), within a refined materic-chromatic palette, and a tendency towards the definition of certain ‘architectural furnishings’ like the canopy beds with their forceful geometric image.

Working inside an existing hotel, certain elements have been conserved, like a series of marble bathrooms and the central staircase faced in wooden boards, to create a new, dynamic two-story space. An overall renovation in a significant work of architecture in Milan, improving the interior spaces with a contemporary look, but also coming to terms with the history of Milanese design, thanks to a careful selection of exceptional pieces.

The lateral facade of the hotel; in the recessed space of connection between the existing building and the addition envisioned in Rossi’s project in the 1980s, a new vertical volume clad in metal screen contains the security staircase for the new accessorized roof garden. The renovation of the hotel has been done by the contractor Nessi & Maiocchi.
The main facade on Piazza Repubblica with the new metal volume on the roof.
View of the belvedere terrace, the Radio Bar, facing the city’s new skyline. Iron structures by Colombo, window frames by Thema, floors by Iris Ceramica, furnishings by Kettal.
The entrance marked by wooden sculptural partitions, with custom Venetian mosaic flooring by Fantini Mosaici.
View of the lobby with the armchairs and ottomans by Nicola Gallizia Design for Molteni & C and the symmetrical glass entrance portals made by Thema.
The path of connection between the lobby and the elevator landing on the ground floor, with a wooden wall sculpture by Paula Guastella - Blow Factory.
The new custom helical staircase leading to the restaurant, with suspension lamps by Oluce.
View of the library beside the reception; the custom furnishings are joined by reissued armchairs designed by Gio Ponti, by Molteni & C.
View of the ninth floor corridor with floors in fiberglass and PVC fabric, supplied and installed by Cudicini. Duca appliques by Nicola Gallizia Design for Oluce.
Aldo Rossi, Parigi, Unifor.
Joe Colombo, Joe Colombo, Kartell.
Achille Castiglioni, San Luca, Poltrona Frau.
Marco Zanuso, Maggiolina, Zanotta.
Luigi Caccia Dominioni, Catilina, Azucena.
Franco Albini, Tre pezzi, Cassina.
Ignazio Gardella, Digamma, Santa&Cole
Vico Magistretti, Tondo, De Padova.
The vertical sequence of historic armchairs of Milanese design positioned in pairs on the landings and the ground floor, providing a sort of museum of Italian design. Floors by Fantini Mosaici.
Views of one of the two suites on the first floor, with terraces (in the drawing, the plan). On the bedside table, gilded Atollo lamp by Vico Magistretti, Compasso d’Oro 1979, produced by Oluce.
Custom furnishings by Molteni & C. One of the new bathrooms: wall and floor coverings by Iris Ceramica, faucets by Zucchetti.Kos.
Views of one of the two suites on the first floor, with terraces.
Plan of one one of two suites on the first floor
#Design #Projects