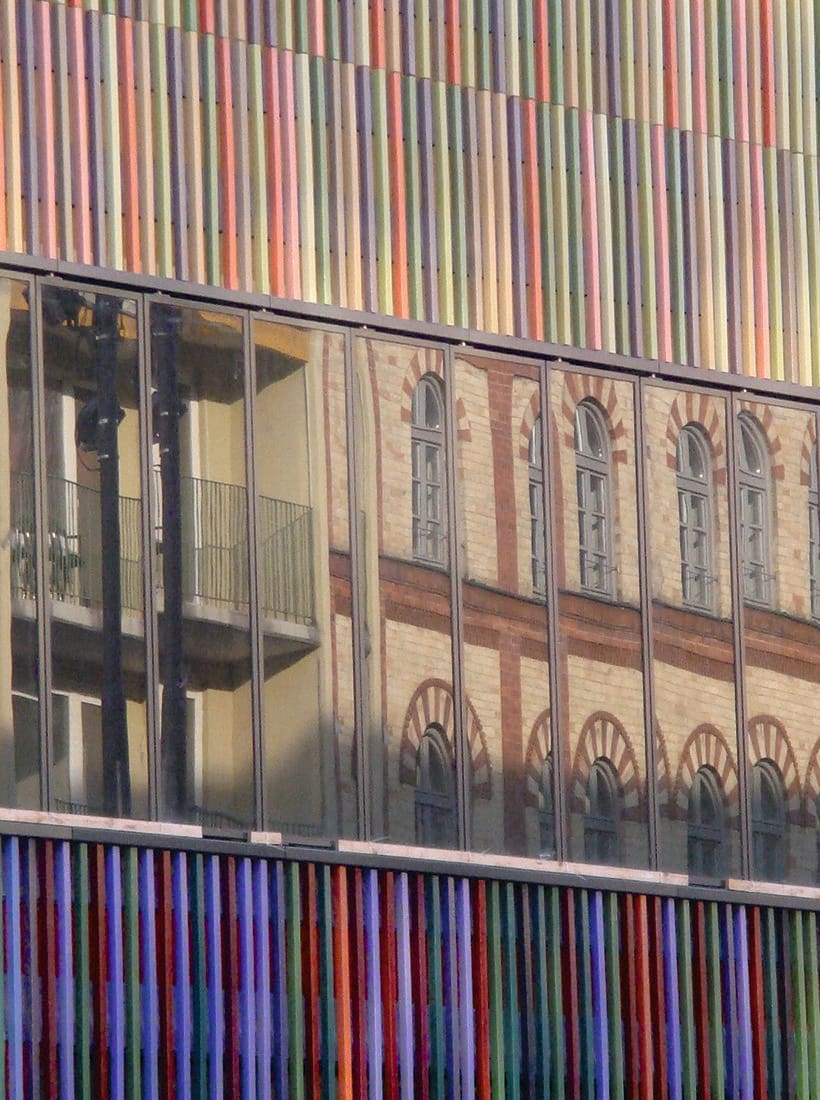 He wears a helmet and a yellow vest, moving through the excavations and scaffolding as if he feels right at home there. Matthias Sauerbruch, who with Louisa Hutton has shared the international studio Sauerbruch Hutton in Berlin since 1989, carefully checks on the progress of the M9 worksite.

The name stands for the Museum of the 1900s, the new cultural center that will open its doors in Mestre in 2017. The goal: to revitalize a piece of the city that has been inaccessible for over a century (where a military barracks once stood).

The project – the result of an international competition won by the studio – is strongly supported by Fondazione Venezia, a private non-profit organization that operates in the Venetian territory to improve its social and cultural resources. Here’s our interview with the German designer.

A great Roman historian, Livy (59 BC – 17 AD), uses a proverb much in vogue in his time: ‘magna civitas, magna solitudo,’ a great city, a great solitude. Over 2000 years ago the theme of urban growth was already a hot topic, almost as it is today, which perhaps is proof that we have not made much progress in this area. With your studio you have focused on urban planning for almost 30 years. How and with what tools is it possible to improve quality of life in today’s metropolis?
I didn’t know that phrase from Livy, but I think it is quite pertinent. Perhaps this is one of the contradictory and at the same time most interesting aspects of the city: you can enjoy a certain level of anonymity, of independence, but also of solitude; at the same time, the city offers a very wide range of choices.
This is what traditionally sets the city apart from the country. For me, it is precisely the combination of anonymity and diversified offerings that has a positive value. The fact remains that the ‘magna solitudo’ is a large-scale problem (not limited only to the urban context), because more and more people live without the support of a family. This is why there is such a growing need for social gathering places.

Like the M9, for example: what are its strong points?
The M9 museum has the purpose of narrating the major changes that happened in the 20th century, to create a meeting place for those who want to know more about their own history. Almost all the public spaces in our cities have a commercial purpose, to some extent.
So having a place for free use of exhibition spaces, with areas for educational activities, a media library and archives, represents a precious contribution to improvement of quality of life in Mestre, and for its communities. The fact that the M9 is close to restaurants, cafes and shops increases its appeal: you can decide to visit an exhibition, to attend a conference or watch a film, but also to meet up with a friend for lunch.
In this sense, the new museum becomes an experiment through which to improve the dynamics of the center of Mestre, creating a fertile relationship between cultural activities and commercial spaces.

In many of your projects, including the latest one for the city of Helsinki, you urge ‘sustainable living’: what do you mean by that?
Helsinki is a particular case: the project meets the challenge of making an entire ‘zero carbon’ district, which is certainly a valid experiment, but still futuristic, not immediately possible. Generally, I think we all have to change our way of living in order to reduce CO2 emissions and protect our resources.
We can achieve this result, for example, by reducing movement, making our lives less frenetic and therefore more appealing. M9 moves in this direction: it is located in the heart of the historical center of Mestre and acts on a small scale. It has not been conceived for tourists (though of course they’re always welcome), but for the Venetian mainland.
This new cultural reality makes it possible for the citizens of Mestre to think of their city as a place where they live and work, but also as a place where they have a chance to spend free time, to share in social and cultural activities. Obviously, speaking of more technical issues connected with energy savings, we are thinking about high-performance buildings that reduce consumption, exploiting renewable energy and innovative solutions, though without going to extremes.
We have noticed that the best projects are the ones that simply follow the basic principles of architecture (orientation, the form of the building, proper design of windows, etc.). In short, the success of a design depends on a balanced blend of good sense and technological innovation.

Is m9 a model that can be duplicated?
I think so. There are many (maybe too many) museums that are utterly decontextualized from the city. M9 moves in the opposite direction. It is anchored to the community from a territorial viewpoint, occupying a space inside the city (which was denied to the inhabitants for years, because this was the site of a military barracks), and from an architectural viewpoint, in the sense that it is formally and aesthetically linked to the existing city.
There is a need for projects that put museums into relation with all the social and cultural realities of a community, starting with its schools. Today we are in the post-Bilbao period. Of course you can be iconic, impressive, spectacular, but I think that today we need something more: a real, solid, open dialogue with the community.

How can that be achieved?
Through a sustainable approach, seen not just from a technical standpoint but also and above all from a social standpoint. The city has to be made of living, vital places, it has to attract people, seduce them, making them want to stay there instead of leaving. This means offering services, comforts, opportunities… but also buildings that are emotionally engaging.
Using color, for example: you can give ‘atmosphere’ to a place, creating a particular, emblematic dimension, or even fixing an aesthetically unappealing and socially decayed situation. I might add that color plays a decisive role not only in architectural terms, but also in terms of perception, because it is able to shape space on an optical, not just a physical, basis.
We have made ample use of color in the M9 project: the exterior is very colorful, thanks to a ceramic texture that changes in the light, due to its different hues. This was also a choice connected with the history and culture of your country. Where ceramics and color are right at home!