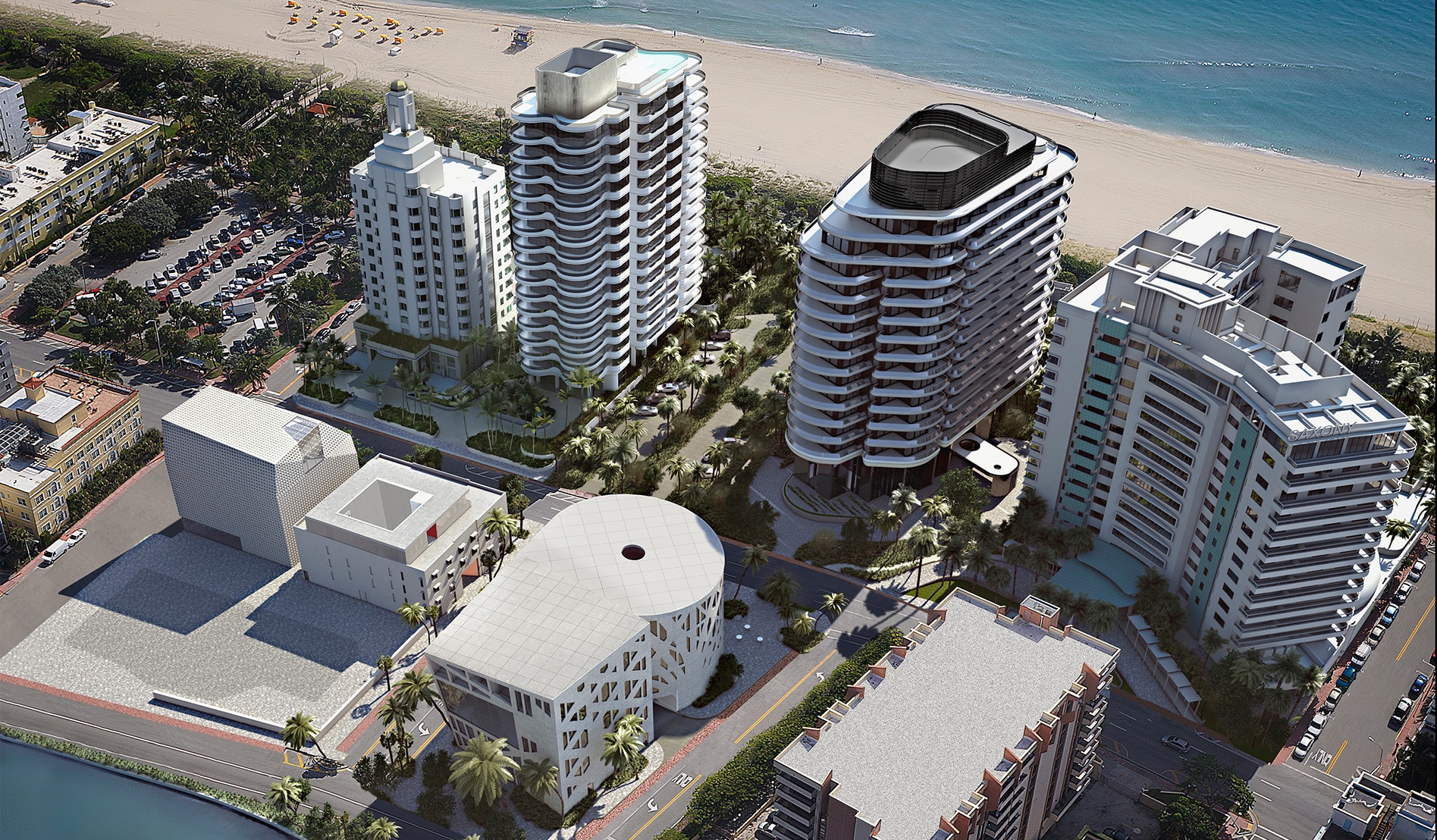 Miami has been changing its character as a seaside city for American oldsters for several decades now, becoming a center of fashion and a location for photo shoots of magazines from all over the world, and a point of reference for art, culture and design, with important annual events of international appeal, and the creation of an established, growing design district.

This change has been accompanied by inter­esting design initiatives that beyond the formula of prestigious real estate operations, with signature apartment complexes by outstand­ing names on the worldwide architecture scene (Zaha Hadid, Foster and Partners, BIG, just to name a few), also extend to the culture of Italian design, as the protagonist of the exclusive new residential spaces offered on the market.

Miami is an interesting laboratory of design thanks to projects conceived on an urban scale; not big master plans of growth and programming, in keeping with traditional ap­proaches, but specific operations that part by part, in a ‘surgical’ way, redesign city segments, listening to the urban fabric and its stories, where new architecture becomes a precise tool of intervention, but one that is linked to an overall logic at the same time.

The episodes of the competition for the Convention Center assigned to OMA in 2013 and canceled by the city government run by the new mayor Philip Levine due to excessive costs (a billion dollars for the overall master plan) and then commissioned to Arquitectonica, apart from contro­versy over the not very transparent procedure, also seem significant in terms of design approach.

OMA’s proposal, in the overall redesign of the existing Convention Center and its surrounding areas, project­ed the structure onto an urban scale with road connections leading to the sea and the transformation of the parking areas (the classic ex­panses of asphalt) into new green spaces, including artificial hills with plants. The Convention Center, in OMA’s proposal, became the base for a new hotel stacked on top of it (to leave more open spaces around it), with the goal of trans­forming the entire zone of intervention into a new equipped urban park for the city.

The program has been reduced but partially con­firmed in the new master plan by Arquitectonica, which proposes a large build­ing with an undulated skin, paced by white vertical sun­screens, surrounded by rows of palm trees.

The Miami De­sign District, formed over time as a zone with show­rooms and restaurants, has also been transformed thanks to initiatives of inter­national stature into a shopping district that welcomes high fashion brands, where the job of architecture is to represent this change.

This is the key for interpretation of the projects of Sou Fujimoto for the new Palm Court shopping center, a work of architecture composed of vertical panels of blue glass, conceived as a geometric cascade of crys­tal that radically alters the image of the shopping district (from prefab sheds with multicolored facades and signs placed over those in ver­nacular style from the 1980s).

Nearby, a multilevel parking facility has been designed by the studio Leong-Leong and Iwamoto Scott; a vi­brant, sculptural building that thanks to a perforated metal facade, and two enormous murals by John Baldessari, with the addition of shops on the ground floor, radically transforms the character of func­tional, normally terse architecture of structures of this type.

The larg­est and most significant urban operation under construction is un­doubtedly the Faena Forum, a project of Alan Faena, a volcanic Argentinian personality who after working in the world of fashion when he was very young, after deciding to retire for five years to grow roses in the garden of his beachside residence, and after transforming an entire neighborhood in Buenos Aires, has chosen Miami for a new venture of urban renewal.

As he says: “Miami is the perfect place of interaction between North and South, but major projects rarely move in the direction of South to North,” and the Faena District operation is also very interesting precisely for this reason. From an architectural viewpoint the project calls for the restoration of the famous Saxony Hotel facing the beach (done by Baz Luhrmann and Catherine Mar­tin), the construction of a luxury apartment building designed by Fos­ter & Partners, with large terraces that evoke the outdoor way of life, with verandas and porches, of South America, and two buildings by OMA, forming the ‘system’ of the Faena Art Center.

Containers based on the forms of reference of the cube and the cylinder, rendered ap­propriately porous by the complex design of the facades, to welcome multidisciplinary activities from dance to theater, cultural events of all kinds, exhibitions and even political debates; possibly the formula of the museum of the 21st century. Iconic works of architecture, yet not self-absorbed, as Shohei Shigematsu of OMA explains, bearing wit­ness to a design path that avoids “grand, self-indulgent gestures, fo­cusing on a concept of urban acupuncture, small-scale interventions and projects on a neighborhood scale.”

The specificity of italian design: an added value

Asked to comment on how the perception of Italian design has changed in Miami, Nasir Kassamali, president of Luminaire, the store of international high-end brands, a true reference point for 41 years, replies: “Are you asking me is the type of audience ad­dressed by design Made in Italy has changed, and what type of product is most in demand? The fact is that Miami has changed. There is no particular product that rises or falls in popularity.

We continue to create essential, modern settings that illustrate a view­point: that of quality and simplicity. From the outset we have fol­lowed this path. Thanks to the mixture of different cultures, Miami is a city that goes through continuous renewal. Change is its only constant. Due to the unique position at the crossroads of the Americas, and the ideal climate, it has experienced a boom in the sectors of real estate and culture. Political disorder in Latin Ameri­ca has brought many immigrants here.

American comfort, constant sunshine and miles of white beaches do the rest. People fall in love with the place. The appreciation of Italian design has certainly grown over the last few decades. With the arrival of Art Basel and the creation of cultural institutions like the PAMM, the Wolfsonian and the De la Cruz Collection, interest in art also continues to grow. In new areas, like the Design District (of Craig Robins, ed.) and Wynwood, design and art go hand in hand and encounter in­creasingly enthusiastic communities.

Developers like Terra Group make residential, commercial or mixed-used buildings, which are changing the Miami landscape, with an eye on fine details, good design and good architecture. World-famous designers like Herzog & de Meuron, Norman Foster, Zaha Hadid, Enrique Norton, Rem Koolhaas and Bjarke Ingels, with their incredible works, have made Miami a city where you can also study good architecture. So the audience has become more curious and more cultured: they appre­ciate crafts, quality, history, and all the stories that go under the title of good design.”

Alongside the ‘new’ (once again this year, from 2 to 6 December, South Miami hosts Miami Art Basel, the contemporary art fair, now at its 14th edition, and Design Miami, the international design forum), in the ‘magic city’ built between South Beach and Downtown, on three artificial islands with its vital port (the continent’s largest passenger facility of its kind), in rela­tion to other islands all the way to the Biscayne Bay, with villas and skyscrapers, there is also a true heritage of traditions, memories, reuse.

A market of wealthy clients are still demanding history-based solutions, in Art Deco style, Mediterranean Revival, Miami Modern (the architectural 20th century of Miami is concentrated at Ocean Drive, the elegant waterfront of South Beach). These peo­ple choose vintage furnishings and limited editions. In this context, we asked two Italian designers about the specificities of Italian de­sign and its added value.

Piero Lissoni and the studio Lissoni As­sociati, in Miami Beach, are working on the Ritz Carlton Residenc­es: 111 homes created by converting a health care structure, and 15 newly constructed villas, all facing Surprise Lake. Construction should be completed in 2016. Its common denominators: a mod­ernist architectural vision, refined interiors, contemporary furnish­ings, full-height windows and a relationship with nature, water and the landscape. “The quality of the light is absolutely special in this city,” says Lissoni.

“We began with the idea of representing the sense of a place with light that is unique in the whole world. Our project combines three elements: Miami Beach, custom design, dedicated services in tune with the quality of the brand. With the idea that being elegant means first of all being simple, because sim­plicity is the highest level of complexity. The entrance lobby en­hances the spatial dimension with a sculptural staircase and is connected to the external zones of the garden and the marina.

Roof terraces, planters, infinity pools on the roofs, a private spa, a lounge bar, BBQ and dining area, a library/conference room, and 24-hour concierge service complete the program. The same ap­proach of total elegance applied in the common zones also applies to the residential units: the quantity of light and shadow inside is controlled by a facade system with balconies, screens and louvers. The kitchens and bathrooms, designed in collaboration with Boffi, convey a European feeling, mixing natural materials like stone, steel and wood. It is like being in a special cloud of relaxation and beauty, a little Portofino.”

Massimo Iosa Ghini, on the other hand, is working on the interior design of the Collection Residences at Coral Gables: 126 housing units on ten levels, with different lay­outs, as well as common areas, with all kinds of amenities and ser­vices: 3500 m2, from the lobby to the sales center, recreation areas for kids, and an entire fitness-sport floor. The estimated comple­tion date is winter 2017.

“The genius loci here is that of Coral Ga­bles,” the architect says, “in the Mediterranean Revival style, mas­sive, with columns, arches and decorations. This approach is a must, here. Specifically, the project is inserted in the immediate vi­cinity of the well-known luxury auto dealer “The Collection.” In a certain sense, I wanted to keep a subtle connection to the previous experience, enriching it with new meanings, with a particular focus on the use of materials (marble and stucco) and colors that in a city like Miami cannot be left to chance.

In the global melting pot, Ital­ian design is a synonym for innovation. And inside a concept of fluidity and spatial continuity, I have let myself be fascinated by the principles of modern classicism in architecture: the idea of nation­ality and symmetry, the rhythm offered by the repetition of pat­terns and shapes, and the reutilization of certain decorative-struc­tural elements of the classical world (ancient Greece) that blend without being forced into the structure of a building of the 21st century.”

Of course all the internal furnishings are also rigorously of Italian design (starting with the Snaidero kitchens and the Mill­due bath furnishings). For both Iosa Ghini and Lissoni, the added value is a precise sensibility