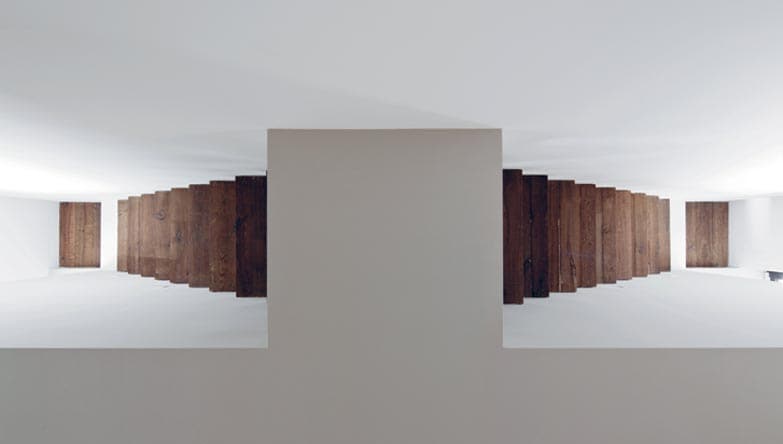 After the entrance you are ‘catapulted’ like Alice in Wonderland into the adventure of a long perspective from the dining-kitchen area with its view of the garden to a vista that ranges beyond the two facades with windows, drawing you towards a vertical ascent achieved by means of a system of staircases.

You set out to discover a residential microcosm that is complex on a conceptual level and in terms of construction as well, triggering sensations of disorientation, abstraction and curiosity. We are in what was a typical house for railway men, built economically in the period from 1920 to 1924, in the context of a sort of village in Milan’s Città Studi zone. A remote past, of the context and the building, given the fact that the original structure of the project by the well-known Roman studio Westway Architects, guided since 2005 by the architects Luca Aureggi and Maurizio Condoluci, also with an office in Milan since 2009, directed by the architect Stefano Pavia, remains only in the masonry enclosure with its openings. The rest has been constructed from scratch. Everything else has been done from scratch. Two years of work and a courageous single client have radically transformed the place into a sophisticated urban villa with garden, featuring an advanced home automation system and CENED class B certification. The total volume has been maintained, with the addition of 60 m2 of space thanks to excavation and new foundations for the basement, set aside for a fitness area, and the new positioning of the slabs and staircases, not to mention the renovation of the attic (including reconstruction of the roof). “The vertical arrangement of the house offered the possibility of making one of our architectural dreams come true: a system of stairs like the impossible constructions of Escher,” says Luca Aureggi. “We gutted the interior and defined a new central nucleus that extends over five levels, each served by two independent staircases compressed along the longitudinal load-bearing walls.” In this way, Aureggi explains, “a vertical loft has been made, with obligatory paths, where getting lost and finding your way again becomes a game, and the sense of playful disorientation enhances the perception of the space, which is actually less than 200 m2 over all.” The staircases, in fact, with single ramps and limited width (80 cm), offer connection from the basement to the fourth floor (in order: fitness zone, dining room with open kitchen facing the garden, living area open to the terrace, bedroom, attic studio) in an alternating, non-continuous way. A zigzag ascent or descent that implies crossing the large landing of each level, designed as an open space that is unified and made more fluid by the wooden facings in oak, and the slabs of natural Burgundy stone. A dynamic conversation that provides richer, more stimulating visuals. The interesting thing about the project is the way every detail has been integrated with the overall design, in keeping with an Anglo-Saxon approach that proposes solutions in which form and structure become a single whole. “The clear separation between the central nucleus and the building enclosure required continuous adjustments, during the work, of the section and plan, for the sizing and insertion of every part. All the way to the painstaking precision required for the structure of the staircases, which dictated the arrangement of all the levels. We developed an expansion joint between the roof and the perimeter masonry, an important structural feature, to absorb the movement of the roof, freeing up the movement of the beams from the walls,” the designers explain. The rooms have no doors, no closets. Just a few vintage pieces, and custom furnishings in painted wood, in gray and light brown, that seem to float in a dilated, rarified dimension. Without renouncing their role as co-protagonists of the staging.