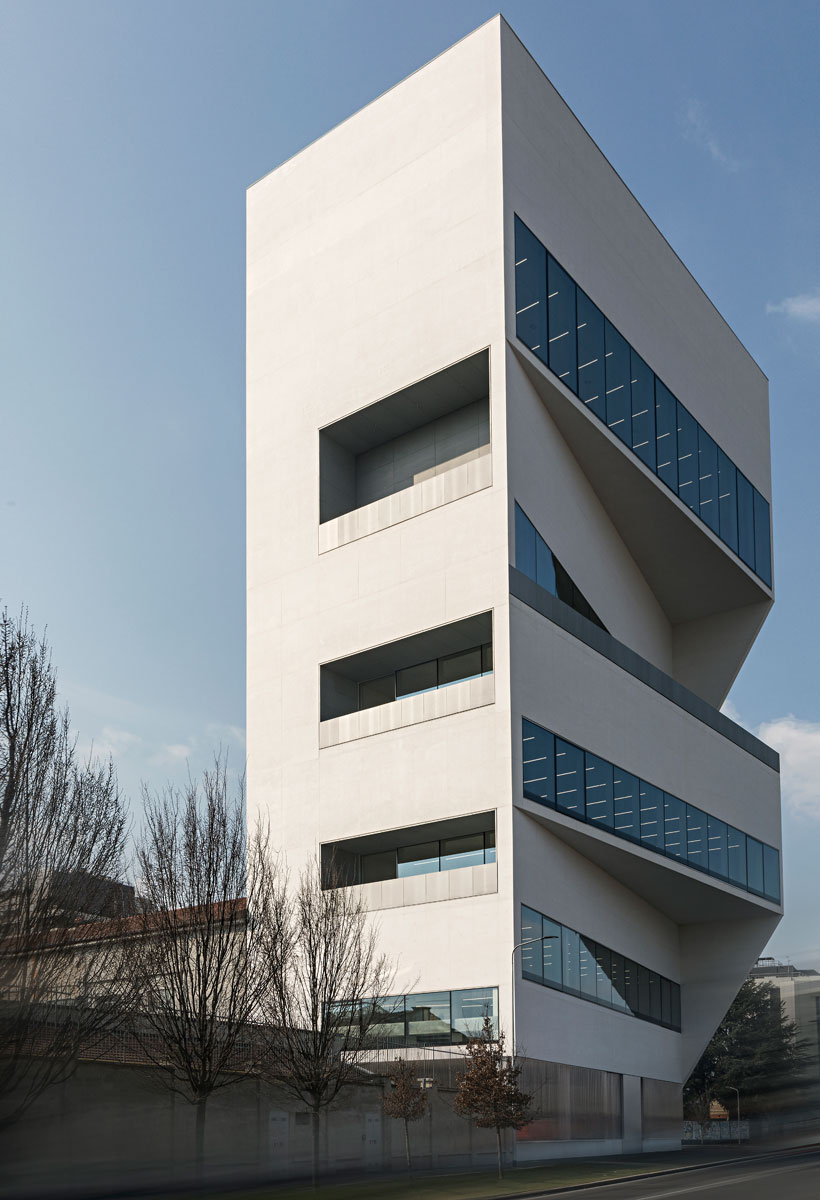 On Largo Isarco in Milan, Fondazione Prada opens the Tower, a dynamic vertical white cube. this facet completes the art citadel, whose extreme variety of old and new spatial types, all redesigned by OMA, stimulates an intense platform of interactions with the public

Three years of construction and there it is, with its height of 60 meters: the long-awaited tower by OMA in Milan that completes the Fondazione Prada facility on Largo Isarco. The building occupies the space of the northwest corner of the lot, and opened to the public in April.

We had a preview visit, when the work on the ten levels was still in progress, accompanied by Federico Pompignoli, project leader of OMA for the Foundation, who offered a detailed account of the work behind this new museum facility. It is the only part of the compound of 19,000 square meters that is visible from a distance, like a landmark in the urban fabric

The tower with nine above-ground levels is made in white fair-face structural concrete, customized in terms of aesthetic quality with respect to what OMA had already tested in the Casa da Música in Porto, in 2005, by specifying the right concrete mix: the aggregate is not traditional gravel, tending towards gray, but brighter white Carrara marble.

The presence of the tower completes the patchwork of building types (and construction systems) in the old industrial spaces of a former distillery from the early 1900s, converted as international trend-setting museum spaces – in the first phase – with new, flexible spaces (like the Podium) made in the second phase. 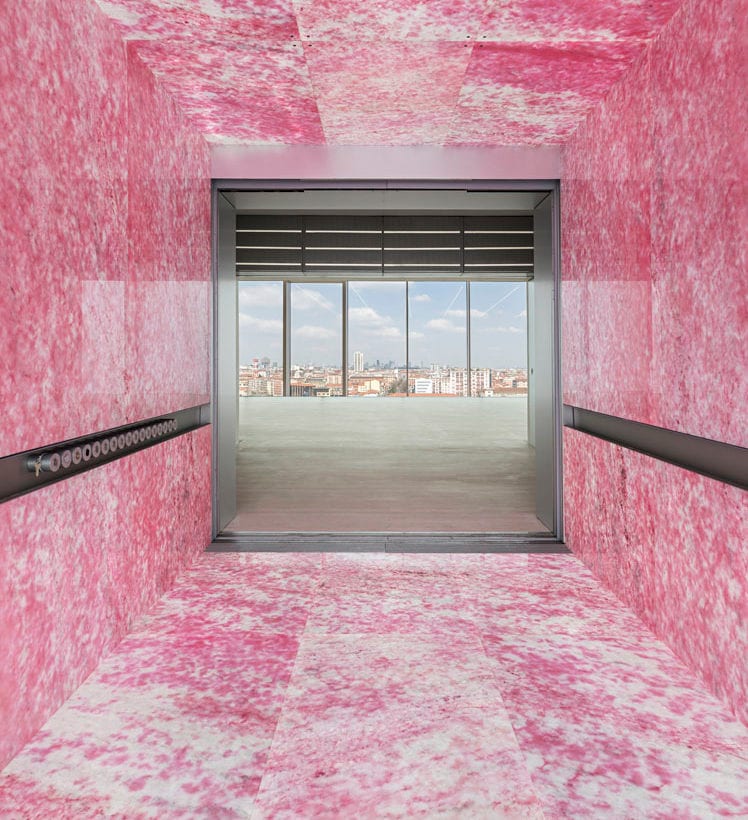 4
Photos: Mattia Aquila - Interior of the main elevator faced in backlit pink onyx and glass, seen at the level of the entrance towards the outside.

“The tower is based on the model of the white cube,” Pompignoli explains, “driven by the theoretical premise of maximum spatial abstraction to avoid interfering with the works on display, which are the true protagonists. We have done everything possible to align its existence in a coherent way with the rest of the complex.

The spatial variety, the guiding idea behind the whole project of the Foundation,” Arch. Pompignoli continues, “has been generated by combining three compositional parameters of reference. First: the form of the plan, trapezoidal and irregular on the ground floor (to adapt to the boundary of the property angled on the north side), which overhanging the street in two moments, on the fourth-fifth levels and the eight-ninth levels, becomes rectangular.

Second: the height of the levels which increases by about 50 cm, from the bottom up, until the 8.5 meters of the gallery on the top floor. Finally, the openings of the building, resulting from the structural concept, are always rigorously alternated on the east side (where the loggias are inserted) and the northwest side (where the glazing is flush with the wall).”

Beyond a portico bordered by a transparent fence of cylindrical polycarbonate bars, a large sliding door in anodized aluminium brings visitors into a boulevard-space that has a flexible relation with the tower, the inner routes of the complex, the former warehouse and other subsequent episodes.

The space corresponding to the foyer has been lined with mirrors to expand the game of urban reflections inside.

The main elevator (a volume of 5x3x3 meters that also transports artworks) has been clad in anodized aluminium on the outside, while inside it is partially glazed and partly done in backlit pink onyx.

But at the level of perception, every time the elevator opens to the various levels visitors see new spatial conditions that convey new experiences. In the rise of the tower, the galleries occupy about 2000 square meters of the total 4000. Each of them has two accesses, a main one in front of the panoramic elevator and another leading to the emergency staircase.

“
The tower is based on the model of the white cube, driven by the theoretical premise of maximum spatial abstraction to avoid interfering with the works on display, which are the true protagonists"

The script calls for visitors to emerge from the elevator, encountering a vestibule, after which they are already inside the exhibition space, with the constants of fine white travertine for the floors, walls and ceilings in fair-face concrete, frames in anodized aluminium, structural walls without openings that become energy efficient thanks to a layer of insulation and a counter-wall in OSB (oriented strand board), with a display system using magnets, to keep them intact.

Then the scheme changes, from level to level. The first, with windows facing east and the closed side to the north, contains the cloakroom at the end, and at the center the unisex restrooms isolated in an independent volume precisely to make the views, the light and the uninterrupted circulation beneficial for all, while the portion below the windows has been equipped with a series of custom steel washbasins.

Other particular features include: physical plant systems and lighting, to enhance the clean image of the concrete, were installed at the moment of the pour, with sophisticated workmanship that includes the detail of the ceiling joints that meet those of the walls. “It took about one year of trials,” Pompignoli explains, “to develop the formwork, which when stripped would guarantee the best results in terms of the finish of the material, in terms of both image and touch.” 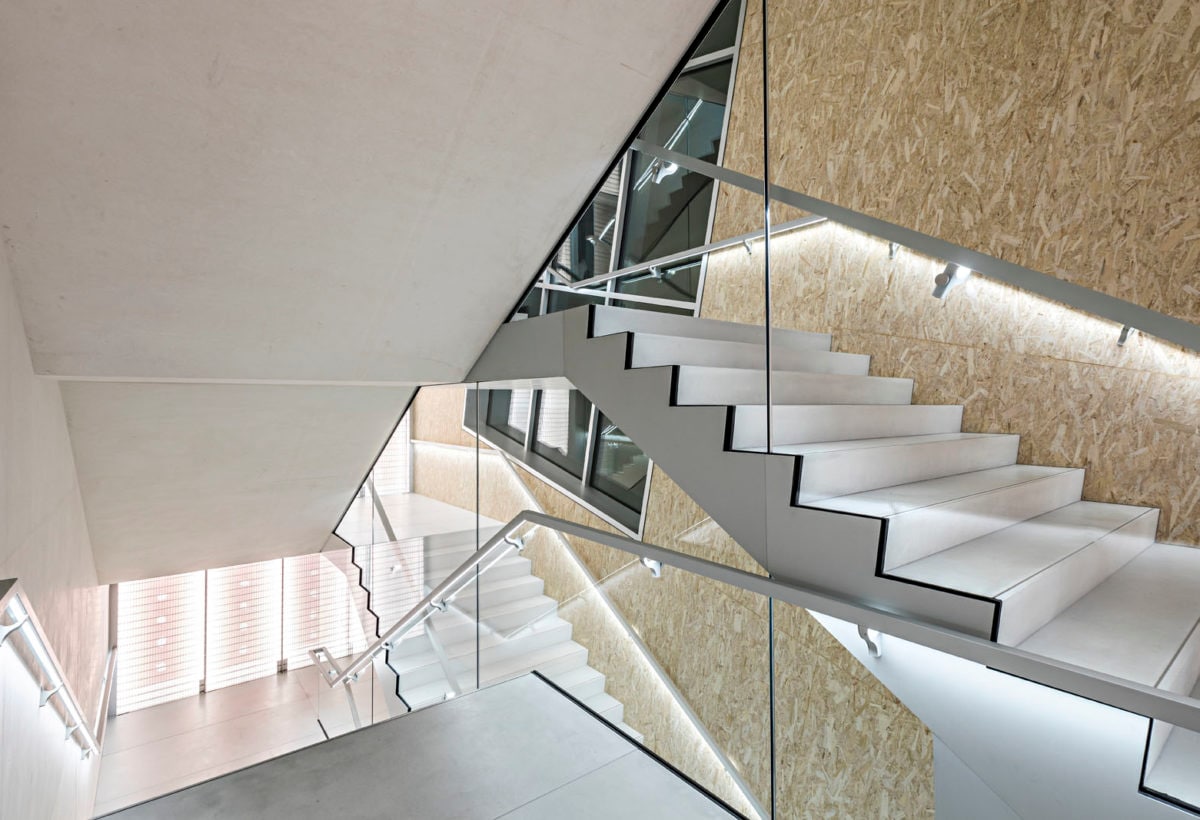 The gallery on the second level still has a trapezoidal plan, but the windows face north towards the city and the rail yard. By contrast, the next level has windows facing east. And so on, in a sort of building block construction that alternates orientation from one floor to the next to create a rhythmical open/closed pattern on the facades, exposed to light on the north, east or west sides.

Beyond the fourth and fifth floors, where the plan becomes rectangular, overhanging the street, the sixth level contains the restaurant, which was still top secret at the time of our visit. Here the layout returns to its trapezoidal shape with the glazing at the corner, while the space opens to the terrace conceived as a portion of the citadel below taken to new heights, with floors in porphyry cobblestones and iron grilles.

The seventh floor is almost entirely set aside for the custom kitchen of the restaurant, equipped with a dumbwaiter and a service terrace. Free of spatial surprises, this level adds an unexpected red note with its wooden flooring, and contains services for the public. The eighth and ninth floors are for more galleries. The upper level has no windows, but benefits from zenithal lighting from a glass roof, screened and marked by a blank portion at the center that becomes the surface of the roof terrace above. The outdoor space with a rooftop bar has been designed as a special viewing point for the city, all the way to the Alps. The direct arrival from the main elevator is set into a black portal, while the whole outdoor zone features a curved mirror-finish cabinet. 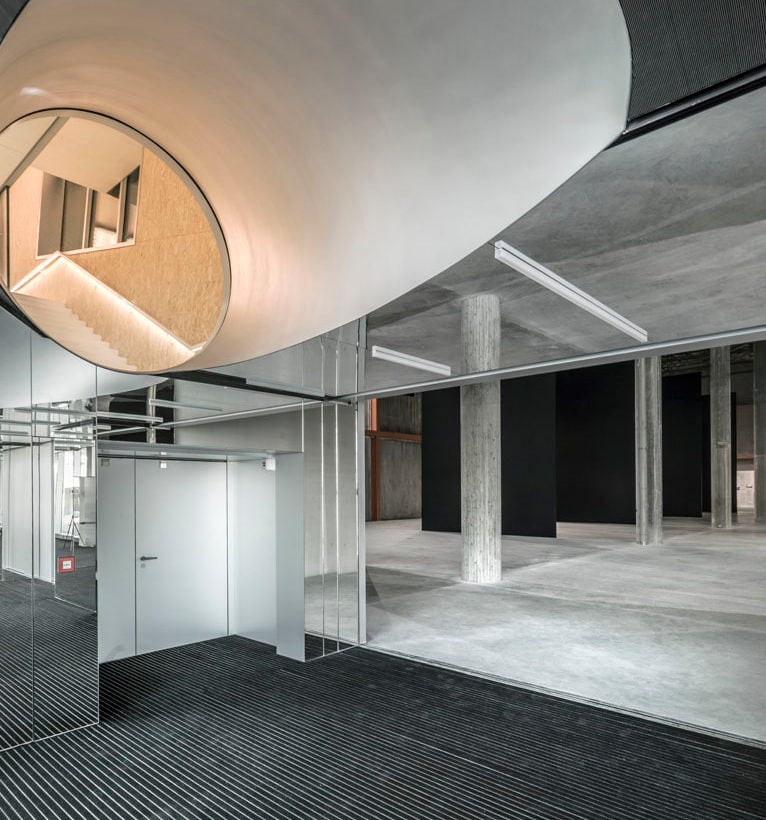 4
Foto di Mattia Aquila - The zone of the foyer lined with mirror-finish surfaces that expand the urban projections in the indoor space.

“The choice of mirrors, also shared by the doors,” Pompignoli says, “was made to eliminate any barriers between the reflection effect of the optical flooring and the city, producing a leap of perception the compresses the depth of field on the same level.” In the series of episodes orchestrated by the tower, the leading role is undoubtedly that of the stairs.

They have the same width throughout the building, but they encounter different spaces between the floors; therefore the ramps and landings have different proportions each time. This enriches the spatial perception, underlined by the alternating flooring in gray and white concrete. Another factor is the presence of glass, in reservoirs of natural light, facing the inside of the building; while the artificial light spreads from the short sides, and under the handrail.

In the end, amidst ascents, descents and intersections, the volume of the staircase, as in an Expressionist film, is also the one that best explains the design complexity of the tower-box. In a sort of intrinsic ambiguity, it makes the simplicity of the exterior more admirable.