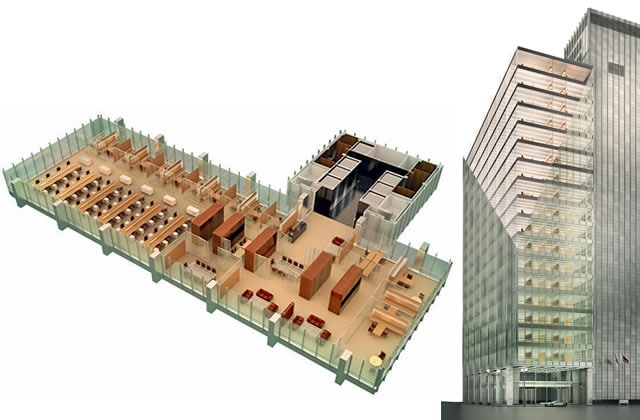 Completed in 1958 by Skidmore, Owings & Merrill, for years the Inland Steel tower was a symbol of the new ranks of professionals who were giving form to the affluent, dynamic American postwar society, the melting pot that led to the society of communication and spectacle, based on new media, led by television, and on the revolution of consumption.

This was the postwar boom. The Great Depression was a thing of the past. The system of radio and television accomplished the fatal juncture that would connect production and commerce. It was the new dream factory, the enchanted realm of advertising. The most recent representation of that world can be found in Mad Men, the cynical, perfect TV series that reproduces interiors, furnishings, dress and lifestyles of the American offices of the day. As Aldo Grasso has written in “Corriere della Sera”, the series “is a formidable portrait of the America of the 1960s, suspended between dream and disdain, between ‘hidden persuaders’ and the inalienable right to let yourself be swayed, between economic growth and social and personal emancipation”. The charm of those elegant, politically incorrect and also very sexy years is closely linked to the architecture, design and fashion of the period. The interiors of Mad Men are cold and functional, with steel as the main material, together with glass panels and metal frames, but always balanced by the warmer colors and textures of wood panels, leather sofas, fine fabrics that wrap the abundant but always perfectly encased feminine forms of Christina Hendricks, the impeccable office manager of the Sterling Cooper advertising agency. The Inland Steel building created by the outstanding designer of SOM, Bruce Graham, was an avant-garde project, which set many records on the Chicago Loop: first building with undergrounding parking facilities, first completely air conditioned skyscraper with interiors free of all structural encumbrances, thanks to the shifting of the staircase-elevator block into a separate volume. The polished image of the facades features a curtain wall of perfectly flat steel, without grooves or embossing, a tribute to the technical expertise of the Inland Steel Corporation. The restoration has been done by the original studio that designed the building, a kind of guarantee of respect for its legacy. One curious detail, according to the New York Times, is that one of the owners of the skyscraper is Frank O. Gehry, who has about a 5% share. It seems he was the one to insist that the project go to SOM. He will also take part in the relaunch with a small but important intervention, the design of a new entrance desk in the lobby that features Radiant One, the steel sculpture by Richard Lippold. The economic and functional recovery of the tower also has to do with its energy system, calling for the insertion inside the existing enclosure of a new glass structure, like a double wall, to improve air circulation and cut down on radiant solar heat, in tandem with electronically controlled mobile sun shield panels. The suspended ceilings now contain a system of conduits for cold water, that also helps to cool the spaces. As a whole, these devices reduce air conditioning by 75%, for energy savings of 38% over conventional buildings. The workspaces are outfitted with the so-called European Benching system, for maximum personalization and optimization of services and connections.