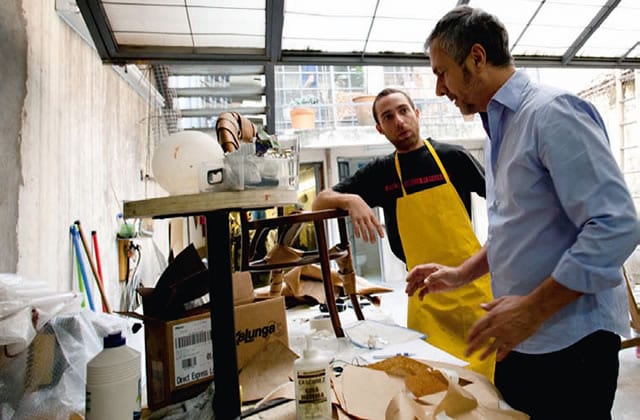 São Paulo, a metropolis without identity, without beginning or end, traditions or history, ready to welcome all diversities. The city where the Campana Brothers live and work is fertile ground for the birth and growth of a robust new design.

“São Paulo is a horrible city, maybe the ugliest in the world.

A formless city”, says the Argentine director Hector Babenco, a resident since 1969, creator cult films like “Kiss of the Spider Woman” (1985), on the pages of Liberation (10 July 2003). “Here no one knows where north, south, east or west are, where the sun rises or where it sets… São Paulo is a man-eating monster. The city never stops growing… It is faceless, without soul, without identity. This makes it very chic, because it can absorb everything. The Paulistano has no traditions and accepts all new things”. There are no traditions because the city was founded just 456 years ago. It has no historic sites, it is without memory, atemporal. All this makes it fertile ground for design. Brazilian design is young, like its capital, naive, primitive perhaps, but full of promise. This city offers all the contradictions on which design can feed: wealth and poverty, good cheer and saudade, music. Tropicalism is not just a soundtrack, it is a cultural and political movement. Bossa Nova was born “as an innovation with respect to traditional samba, but also and above all as an instinctive reaction against the military dictatorship, as opposition”, Caetano Veloso writes, and his song “Alegria, Alegria” is its manifesto. Because it is ‘nova’, Brazilian music is closely linked to contemporary Brazilian design, not that of a rationalist stamp that reached Brazil from Europe with refugees from repression, but local design connected with the tropical richness and contradictions of the country. Fernando & Humberto Campana are Bossa Nova fans, and always keep up to date on new artists. Whenever they come to Italy they bring new recordings, as if to emphasize their ties to Brazil and São Paulo. “We come to Italy”, they say, “but we always depart to rediscover the distance that offers us a different vantage point, and allows us to propose different codes of interpretation of objects”. They say they are always ‘children’, like their country that is still young. “Brazil”, the tell us, “is at the start of its parabola, while your country is reaching the end of its course. Therefore we have lightness, of living and creating. We don’t have a written history, everyone can write his own story. There can be many histories because Brazil has a hybrid soul. There are many cultures, and their codes are accessible. This multiplicity generates our freedom and anarchy. We have time ahead of us, that’s why we are calm, and we create naturally, without pressure or anxiety”. The attitude of welcoming all new things, also underlined by Babenco, the calm of those who feel young, with plenty of time ahead of them, the freedom of those who have no traditions, all make the new Brazilian design very special. The forms, the mixtures of materials, contain the risk-taking of people who have no models, no masters. Dissonance, ingenuous brutalism reflect the humid flourishing of Brazilian nature, and urban chaos as well. The fact that no one style exists, but a fertile linguistic Babel, is also confirmed by Waldick Jatoba, a refined design collector and promoter of Design São Paulo, whose first edition, directed by Maria Helena Estrada, took place at the park of Ibirapuera in June 2011. Design São Paulo, instead of a classic annual fair, is a platform conceived to develop disciplinary awareness and to educate sector professionals and visitors about contemporary design. This is why the event, which named Fernando & Humberto Campana designers of the year, was accompanied by a detailed program of conferences and debates, featuring international guests. Design São Paulo, in the intentions of its founder, also aims at being a tool to help designers to construct their own personality. Not having traditions or points of reference may be liberating, but it is also disorienting. The multiplicity of options is great wealth, but it can also be a real burden. Constraints can help to organize a path of research, while moving forward in chaos can be bewildering. The pursuit of a new language capable of conserving exuberance and metissage often leads to useless redundance and an excess of contaminations. Fernando & Humberto Campana have been the pathfinders. They have freed Brazilian design of European influence, taking it back to the essence of Brazilian nature. They have indicated a path that has no models and comes from personal-poetic improvisation, based on making things by hand. Fertile, but risky. So Waldick Jatoba is correct in saying that design education is needed. Though education always brings with it the danger of standardization, fortunately not a problem, at the moment, for Brazilian design. Still running wild, Brazilian design offers masterpieces of creativity and fantasy, though often running up against the pitfalls of trash and kitsch. Its great authenticity and quality come from its capacity to make harmonies and dissonances thrilling, to address the emotions before the intellect. This youthful, reckless force can provide a healthy kick for arid European design. A fruit from a humid climate, Brazilian design is still growing, like a plant ready to produce many new shoots and sprouts.