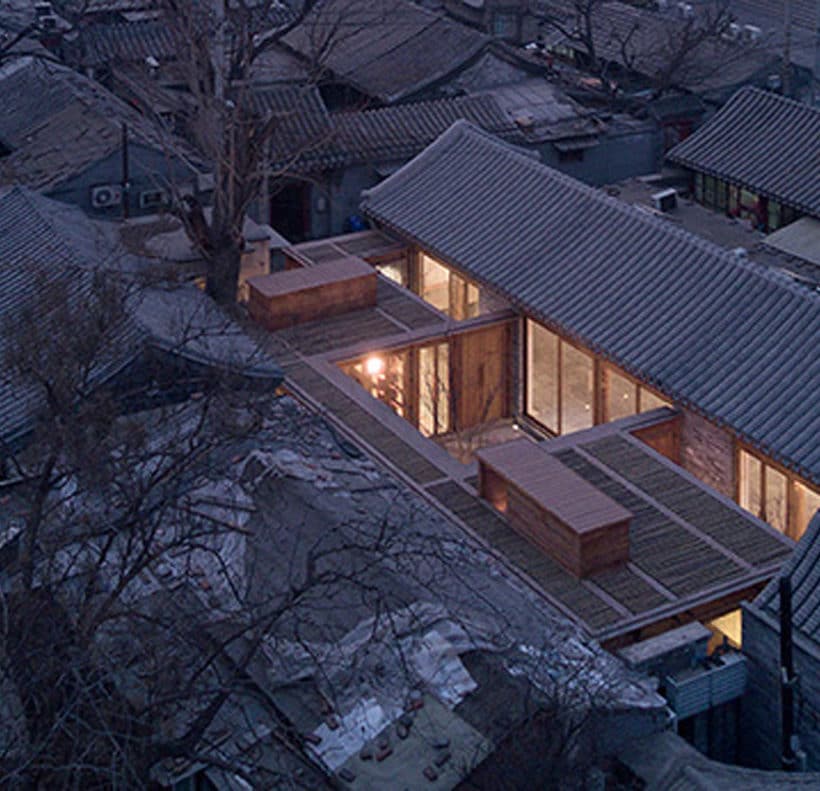 In Beijing, in the Baitasi district, at the center of the historical city, a Zayuan courtyard house has been transformed into a place open to the public for exhibitions and cultural events. By Vector Architects, a studio based in Beijing

The rigorous overall geometry, the absolute symmetrical layout, the inflexible hierarchic order of the traditional Chinese house can be seen as the architectural translation of the laws that govern the family, an ethical premise for the society and the state.

At least until a few years ago, the Chinese family has been a compact microcosm, a ‘miniature state’ with clear rules and customs. The house thus became a sort of tiny city, an introverted and precise structure, with a continuous walled enclosure for protection from the outside world, the life of the street or the countryside.

In this way, the structure was similar to that of the nuclear family, and the typological foundations of the common house followed echoed those of the palace, forming a single typological and morphological layout defined by the inner courtyard placed on a central axis. A type that was applied over time to rural and urban dwellings, grand palaces, and even imperial tombs and temples.

The siheyuan (quadrangle) represents a domestic solution that marked the end of a process of evolution that began in Beijing in the 12th century. It has a regular quadrangular form with a compact wall, interrupted at times by small openings and narrow passages, to protect and enclose the family microcosm, organized in the succession of three courtyards along an axis, surrounded by a series of porticos and pavilions clustered together in perfect harmony.

But if the siheyuan model stands out in its complete form when the construction is isolated in the countryside or on the outskirts of the city, in its urban version, when the courtyard house becomes a part of a hutong, one of the narrow streets in the historical center, as in Beijing, the model can take on many variations, where the courtyard in its different forms and sizes, oblong or squared, is still the central core of the house, open to the sky, around which to organize the various spaces on a single level.

This can be seen in the renovation and conversion of a zayuan (an evolution of the single-family siheyuan model that allowed the historic architectural nuclei to be occupied by multiple families) developed by the studio Vector Architects directed by Gong Dong, in the Baitasi zone of the old center of Beijing.

An initiative that is part of the overall Baitasi Remade Project, which sets out to regenerate the entire area, conserving the dense historical urban fabric, operating by parts and in individual cases of architectural and urban ‘micro-surgery.’

The project by Vector Architects reconstructs the figure of the internal courtyard, which already from the street entrance displays its contemporary character, but with an eye on the memory of the site, in the design of a glazed wooden entryway perfectly inserted amidst the existing volumes, flanked by a double translucent screen composed of two partitions in gray glazed brick.

These lead on one side to the cafe facing the inner courtyard, presented as an ‘equipped’ and collective entrance; on the other side, it functions as a screen for access from the courtyard to the gallery and events space, extending for the entire length of the lot.

The quadrangular central court opens in line with the main pavilion, flanked at the sides by the cafe space and a multifunctional hall, forming a U-shaped structure whose missing side, occupied by the wall of the neighboring construction, is resolved by a bamboo screen to create a sort of vertical garden protected by a new wooden canopy with regular quadrangular panels.

On a compositional level, the green wall connects the two separate volumes, which are grafted onto the main structure, closing the courtyard on four sides. A new modular design of the wooden casements, which can be opened to line up with the support pillars, links the house in a single ordering figure.

The interiors reprise the exposed wooden structure of the pitched roof of the events pavilion; the two smaller volumes have coffered ceilings that match – in terms of material, figure and measurements – that of the canopy that protects the green line of bamboo, generating a close indoor-outdoor relationship.

In the cafe space and the multipurpose hall the geometric pattern is interrupted by strategic rises in the roof level, obtained through rectangular cuts that create vertical skylights ready to capture daylight.

The redesign of the entire structure, conceived as a community center for gatherings, exhibitions and presentations, is also configured as a ‘place of passage’; the main entrance corresponds to a secondary one on the opposite side, to make the structure of the new Zayuan permeable and open to the entire surrounding urban setting.

The main entrance is configured as a wooden micro-architecture, a contemporary graft between the volumes of the existing constructions. Partitions of gray brick form a visual screen from the outside.
Evening view of the building involved in the renovation, inside the dense urban fabric of the Baitasi district.
Design sketch of the overall renovation of the building.
Detail of the partition in gray glazed brick of the entrance to the exhibition pavilion from the courtyard.
The vertical bamboo garden that concludes the central courtyard along the wall bordering the adjacent property.
The cafe zone at the entrance to the facility; the custom bookcases rotate by 90° on a fixed pivot, functioning as closure elements in case of direct entry to the central courtyard.
View from the cafe towards the courtyard.
The accessorized zone of the cafe; the custom wooden furnishings form a single compositional and materic whole with the geometric design of the suspended ceiling and the facings.
View of the unified space of the exhibition pavilion.
View of the entrance route to the courtyard and the cafe.
#Design #Projects