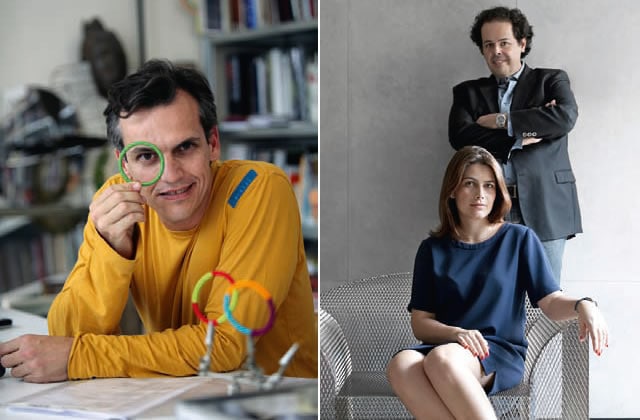 In an exclusive zone of São Paulo, an autobiographical house that speaks of personal paths, choices of taste and, above all, a great passion for architecture and design, shared with friends all from all over the world.

Entering the home of Márcio and Liliane Barboza, in the elegant Jardins quarter of São Paulo, something reminds me of Mies van de Rohe.

The rigorous lines and dominant gray tones also remind me of the legacy of Lina Bo Bardi and Paulo Mendes da Rocha. Yet the project, the minimalist, modernist lines of this splendid home, compositionally enclosed in the image of a monolithic box on pilotis around a patio, without windows but with enormous panes of glass that let the green of the garden and the blue of the sky enter, are by the young lady of the house, just 31 years old, better known as Lili. She doesn’t hesitate to let herself be influenced by the great masters. In fact her face lights up when she talks about the pleasure of being guided by Tadao Ando through the Fondazione Pinault in Venice, and she readily admits that the staircases that join the four level of the house, with cantilevered steps and LED lights, were inspired by the work of Claudio Silvestrin. Lili has painstakingly designed every detail, including the size of the large slabs of light gray limestone, 280 x 76 cm, that clad the floors and some of the walls, which many people mistake for exposed concrete. She had the idea of the small carved pieces made with sandstone scrap to clad external walls, and that of using Indonesian volcanic stone to cover the fireplace and the swimming pool, which actually looks more like a natural pond. The transformation as a deck in the bedroom area of the peroba beams of the roof of the old house that used to stand on this lot was another one of her initiatives. In the kitchen an enormous Carrara marble counter is the most striking feature. The walls of all the bathrooms are in black slabs of marble from Nepal, without joints, an example of the discreet luxury that pervades the whole house. It was not difficult to furnish the large interiors. After all, the owner of Atrium, Márcio Barboza, is the Brazilian representative of some of the most famous brands of international design. Ricardo Bello Dias, an architect and creative director based in Milan, is an old friend, and he worked together with Lili on the interior design. This involved family heirlooms, vintage and design pieces, including items from the catalogues of Minotti, B&B Italia, Promemoria. There are also chandeliers by Noguchi, carpets from Nepal, and different items imported by the entrepreneur, seen in the many showrooms he has opened in São Paulo. The black grand piano Lili has been playing since her childhood is a family heirloom. The objects, many of them oriental, like the two Tang Dynasty female figures in the entrance, and the white, German, Italian, Chinese and Scandinavian ceramics, have all been selected by the couple during their travels for work or vacations. There are vintage design pieces like the French rocking chair from the 1920s and the original chair in cowhide and black iron by Charlotte Perriand. A sculptural fossil trunk, in black and white, a work and gift of nature, blends with the gray tones of the floors, carpets and divans. The handles in bronze and Murano glass were custom designed for the house. The mixture of fabrics of the large decor cushions, the violet book on Frida Kahlo beside the stool that is also violet, in velvet, are the results of sensitive research conducted by Ricardo Bello Dias. The entrepreneur’s hobby is photography, so the enormous quantity of photographs on the large walls of the living area, conceived as an open space, should come as no surprise: Vik Muniz, Miguel Rio Branco and Mario Cravo Neto. A painting by the Pernambucano Macaparana, an etching by Emanuel Araujo, a mobile by Knopp Ferro, a painting by Sergio Fingerman and sculptures by Tunga and Amilcar de Castro are all included in the couple’s collection. Lili’s background includes work for a large construction company in São Paulo, after which she gained experience with Atrium, her husband’s company. Her recent works are the architecture and interior design of the new B&B Store in São Paulo, and the first showroom of Christian Liaigre in South America, soon to be opened, as well as the offices of the Africa advertising agency of Nizan Guanaes in New York. Márcio began to roam the world in pursuit of the best design to bring to Brazil when he was just over 20 years old. The imports were authorized by the Brazilian government, when interest in everything that arrived from elsewhere was very strong. This was happening in a period, as he puts it, when people still thought the capital of Brazil was Buenos Aires. Today he seems to be amazed by the increased interest in Brazil and its market. Tom Dixon, Jeffrey Bernett, Vladimir Kagan, Piero Lissoni and Patricia Urquiola are just a few of the designers who, when they first set foot in Brazil, have been welcomed by Márcio and Lili Barboza. Thanks to the constant company of creative people, though not only the most famous, and other businessmen in the design sector, Márcio Barboza has had great influence on the evolution of taste among the new generations of Brazilians: “More than furniture, I want to sell culture and lifestyle”, he says. And he points out that he is not interested in trends, but in the possibility of selling ‘eternal’ design, embodying values and an aesthetic of quality.