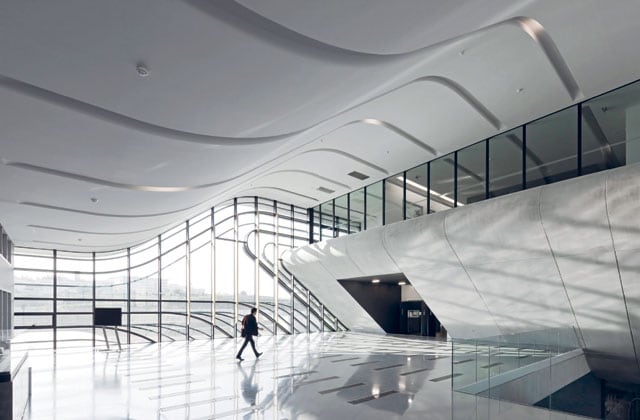 “I don’t think it is right for a single building to be the symbol of a whole city, though in our projects we do try to create symbols.

The Pierresvives is appreciated because it is a public building with beautiful forms. I think of architecture as an alliance between form and function, and the latter should never be sacrificed to the former”. Montpellier is not looking for symbols, but for reference points in its cultural renaissance. Zaha Hadid understands this, and in spite of the decade that has passed since the architectural competition, today a new metropolitan icon has appeared on the scene. The eighth largest French city is going through a period of great economic and cultural growth. With nearby Marseille as European cultural capital next year, Montpellier is focusing on architecture and art as ways to win its economic battle. The Pierresvives is at the heart of an urban investment plan on a 10-hectare lot in the northwestern part of the city, at the intersection of the La Paillade, Alco and Malbosc districts. “Today, in this digital century, the life of people has become flexible and globalized, and we have to come to terms with much more complex social realities than in the industrial past. This means a new way of doing urban planning, in multiple layers, for porous results. The fluidity and transparency of the Pierresvives reflect the complexity of our century”. Zaha Hadid sums up the ambitious contemporary vision of the Hérault Region, the client for a complex formed by 900 apartments, shops, offices, two plazas, 4 hectares of parks and sports facilities, and many other infrastructures resting on a sustainable platform. Integration, bio-diversity, energy efficiency form the basis of a complex urban program on which the four pillars of the architectural project of Hadid stand. “Sharing of knowledge”, “exchange of memories”, “union between sports and wellbeing” and “the thinking man inside architecture” find their respective domains in the Multimedia Library, the Public Archives, the Department of Sporting Activities of Hérault, and in the cyclical workshops, conferences and exhibitions on the comprehension of architecture and its role in society. “We are not interested only in the form of the architecture; we also want to think about new uses. In the case of Pierresvives we wanted this big complex to be clearly and efficiently organized. The original idea was The Tree of Knowledge. We worked on this concept, seeking symmetries between formal ideological content and programs; together, the concepts of ramification and aggregation”. Zaha Hadid admits that the biggest difficulty in a project that has gone through so many phases has been unifying three important public institutions in a single container, managing to also separate the three programs. The result is an impressive tree trunk, 195 meters long, extending on an overall area of 26,000 m2, with 5 levels. From the street entrance on Rue Marius Petipa, one wonders how many streams of green water have smoothed the hard bark to round its borders so smoothly. The density of extrusions and voids varies along the four facades, according to functional and ergonomic solutions, luminous modulations and synergies between the main interior spaces and the connective paths. “Architectural creation always requires going beyond conventional limits, and I think the Pierresvives is an excellent example of this. Its conception is an ambitious and complete statement of our desire to create fluid, dynamic spaces. It combines formal geometric complexity with a daring structure and an innovative use of materials”. The futuristic approach of Zaha Hadid clambers onto layers of prestressed concrete and curves of green glass in the facade, announcing tripartite interior spaces organized horizontally by a mixed structure enclosed in 1000 prefabricated concrete parts and 5000 m2 of glass panel. The ground floor welcomes visitors from its western side, while the eastern side, towards the parking area, is perforated by different auxiliary entrances. In the morning light the exhibition space is almost a mirror image of the large main foyer, a space of public gathering that distributes flows towards the three main functions of the complex. The first is organized inside the thick base; the Public Archives, “the solid base of the trunk”. Looking up at a sky of white waves, the long escalator rises to the second level, almost touching the contour curves of the impressive suspended ceiling, beyond the enormous protruding volume that contains the black auditorium with 201 seats. The landing is at yet another foyer with an undulated section and a height of two storeys, glazed on both sides, leading to the “more porous” Multimedia Library with an area of 1000 m2, and the many spaces set aside for exhibitions, reading and the “room of the young citizen”. The patterns are denser in the paths of circulation, lighter in the volumes. The upper section of the building has a rational personality, with orthogonal grids of the offices of the Department of Sporting Activities of Hérault, the infinite rooms for the archives and, finally, on the upper level, a rectangular open courtyard. After wandering through the artificial labyrinths of acrylic resin, the white, cool fluorescent light gives way to blue tones. The vertical ascent plays an important role for the comprehension of the ideological approach. The Tree of Knowledge returns, and the analogy of the trunk that controls complexity in its core. The branches emerge and reach out to the various institutions, becoming more slender, lighter, stretching towards the sky and the unknown.