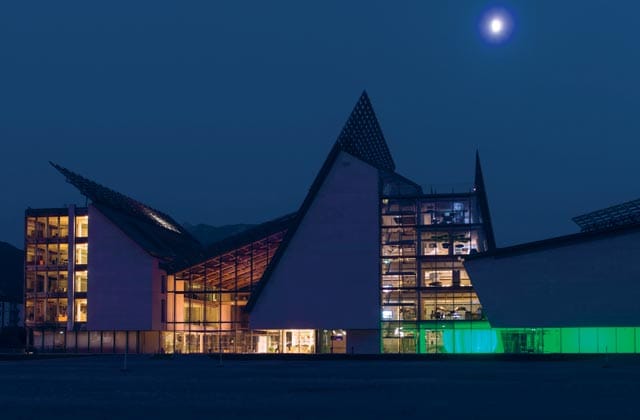 Avoiding the usual debate – should the architecture of a museum be more or less striking than its content? (ex.

the Guggenheim Museum by Frank Lloyd Wright in New York) – we can say that at the MUSE in Trent, the new science museum by Renzo Piano, the cultural appetite of the museum machine and sensitive listening to the place find an exemplary compositional and narrative balance. Like a skilled gardener, the architect from Genoa, long concerned with the themes of the “fragility of the Earth,” and already the designer of science museums in San Francisco and Amsterdam, has found the right seeds for a good harvest: his work determines the quality of the context, while the flexible spatial arrangement legitimizes the scientific content, in precise and concrete responses of forms and volumes. “The MUSE, a museum of science and natural history, offers a voyage inside biodiversity, and the ‘void’ is its fulcrum. The zero-gravity solution means that from any exhibition space, you can see all the rest of the museum. Because the museum remains a ‘living’ place where knowledge and research on man-environment relations can promote future choices of sustainable growth,” Piano explains. He began working on this project ten years ago, with the idea of transforming the concept of the museum of natural sciences, of 19th-century origin, into a modern educational center for spectacular presentations of scientific materials, also relying on multimedia and interactive techniques. So it should come as no surprise that his ‘mountain,’ the dream of the man of the sea, 12,000 m2 on five above-ground levels plus two basements, conveys the lightness of a sailboat, capable of interpreting the suggestions the museum can offer with its naturalistic works through an example of ecosustainable construction. “There are no borders between nature and science, just as there are none between different disciplines, or between the universal, global and local dimensions,” Piano adds. His project establishes a dialogue with the messages the museum sets out to communicate, with an ethical priority: it links its cultural presence to the Trentino territory, making it an integral part of the display project, a place of gathering and exchange of shared perspectives, a sort of agorà. In the context, the MUSE plays the role of a center of gravity of Trent’s cultural pole and museum network. It stands in an industrial zone of the city that has been reclaimed, and after 160 years restores the relationship with the Adige River: the former Michelin area has been revived thanks to the new Le Albere quarter, a green model of ecosustainable building (10 blocks of residences and offices, with mixed-function settlement), also by Piano’s studio. MUSE is the feather in its cap. The focus on environmentalism, supported by the local community, is underscored by the embrace of the public park that functions as the connector of the entire area (also marked, to the north, by the existing Palazzo delle Albere, since 1987 home of the Museum of Modern and Contemporary Art of Trent and Rovereto), and by the presence of water, in the form of a canal that crosses the zone from south to north, reflecting the forms of the MUSE, vibrant with lights and shadows, in their succession of full and empty portions materialized in a figure marked by two large slopes of the roof, one facing northeast, the other northwest. The vivid recognition factor of these architectural features, partially opaque, with a zinc finish, and partially transparent, in glass, determine the profile of the building, based on that of the surrounding mountains, and organizing the exhibition itinerary in descent, from the glaciers to the valley, in a narration of the particular traits of different habitats. The creative leap lies in the fact that the vertical development, evoking the natural dimension of the territory, is joined by a horizontal path through the building that produces a voyage between Alpine zones and the rest of the world, between local sensibilities and global commitment, all in terms of sustainable development. Thus the narrative construction is not completed at the zero level of the entrance, which represents the museum in the central void corresponding to the large closed slope of the skylight roof faced by the various exhibition spaces. This is the place of force of the exhibit design, because as happens in nature, inside this space with a height of 18 meters, that creates visual continuity between the levels, all the way to the basement set aside for the tropical greenhouse (the habitat of a rain forest in Tanzania), stuffed animals float in the air on platforms, along with dinosaur skeletons suspended with thin steel cables attached to the ceiling or the floor, in keeping with the zero gravity concept. From here, to the east of the entrance lobby, one reaches the cafe, the library and media room, the spaces for children, the workshops and the direct multisensorial experiences. Finally, one arrives at the volume with the so-called ‘green facade’ that contains the offices on the last three levels. The effect of transparency and immateriality of the installation in the main area of the lobby and throughout the building is enhanced by the furnishings (from the tables to the display cases, the counters to the monitors, all custom made) and underlined by the uniformity of the local construction materials used for the facings: verdello stone with hammered finish and solid bamboo slats (produced in Italy) for the floors, transparent or frosted glass for the vertical surfaces. The design of the details covers the steel joints of the window frames, while the environmental sustainability and energy thrift of the complex are accomplished through construction techniques, with ample use of renewable sources (photovoltaic panels along the roof pitches, geothermal probes to augment the teleheating system); an automated system of sunscreens and curtains run by temperature and radiation sensors; a cistern for the gathering of rainwater (used to irrigate the greenhouse and fill the surrounding pool). Thanks to the collaboration with the Distretto Tecnologico Trentino, the project has already gained LEED Gold certification.