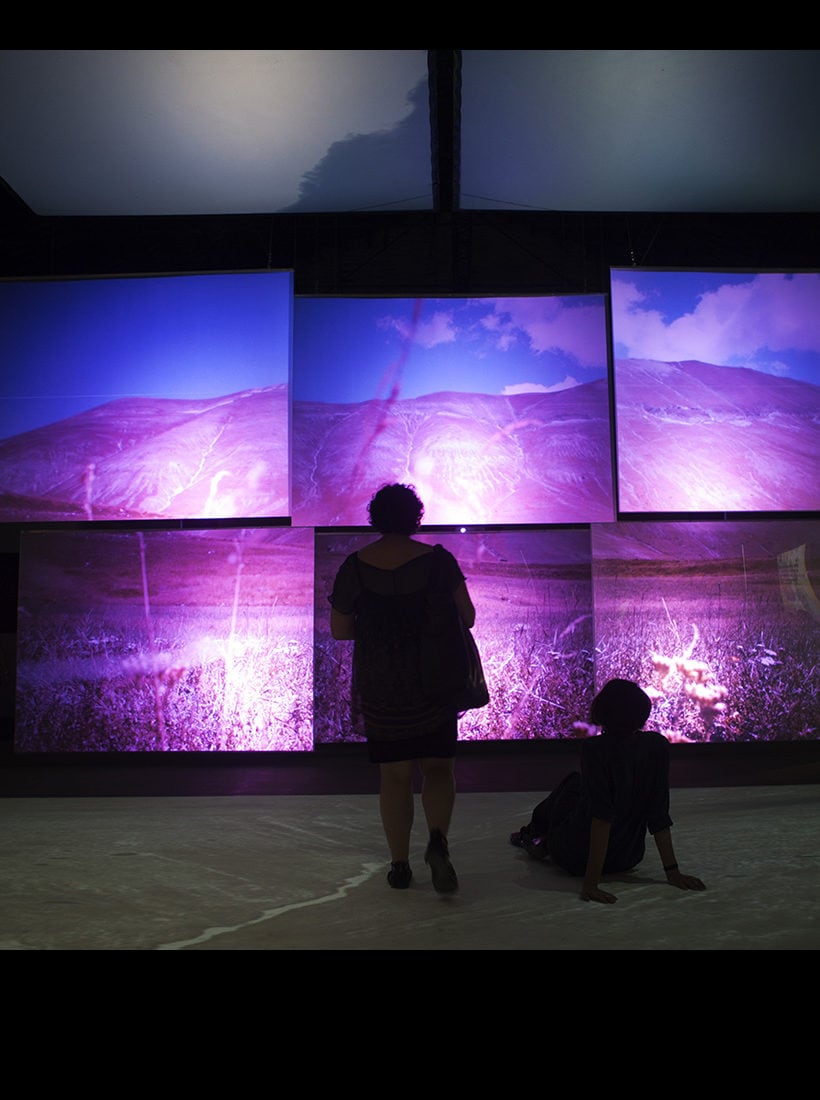 The exhibit designs of Dario Curatolo mix the volumetric dimension of spaces with graphic design and multimedia techniques, films and holograms, to narrate corporate identity, institutional values, projects and ideas in itineraries that offer a cognitive experience to all visitors.

It is no coincidence that in many cases he is the curator, art director and designer of the concept and the visual identity, as in the case of the Italian Pavilion at Hong Kong Design Week in December 2017.

For Curatolo, “constructing a setting around an idea is a unique opportunity to narrate a story through a space that takes form from the idea itself. From the walls to the captions and graphics, every element is part of a complex puzzle that makes it possible to transform an idea or a product into an experience.”

In the meeting of material (constructed volumes) and immaterial (holograms, immersive projections) dimensions, Curatolo’s installations take on the character of ‘narrative containers’ in which to offer the audience interactive experiences and carefully gauged messages.

In the space of trade fairs, with their succession of booths forming orthogonal corridors, it is not easy to stand out in terms of an architectural solution. Constraints of height and measurements tend to make all the booths look alike.

For Federlegno Arredi, at the Salone del Mobile of Milan in 2015, Curatolo designed the space “IN ITALY” with the participation of 64 Italian companies and a selected group of designers and architects, focusing on the theme of products and design.

In a large corner space open on two sides, with a forceful roof, conceived as a sort of protected and welcoming plaza, the companies were presented with interactive films, where visitors got involved in virtual explorations of Italian know-how and the path of production that lies behind any object.

In this case the film was conceived as a sort of multi-level story, in which by clicking on objects or personalities on the touchscreens one entered spaces of in-depth study for specific stories, direct remarks of entrepreneurs, designers and artisans.

The films were joined by a stage with holograms (of Italian designers) that spoke to visitors like real figures, constantly changing. The project went beyond the volume of the space to extend creative action to techniques of narration and staging, all the way to the creation of a special app to gather more exhaustive documentation.

Sometimes the project becomes a ‘frame’ in which to display objects and drawings, as in the case of Tianjin International Design Week in 2015. Here the Italian Pavilion was paced by a system of dark red containers (suggesting traditional Chinese lacquer), which combined interior and exterior to host a selection of objects and architectural drawings by Roman professionals.

For the Meeting 2015 of Comunione & Liberazione in Rimini, the idea was to get away from the trade fair pavilion and construct an abstract white volume on a reflecting pool. A small work of architecture symbolically connecting banks, bringing people together, and narrating the story of the founder of this religious/political movement, Don Giussani. The visitors were also invited to put their own Polaroid portraits on the inner wall, creating a very colorful final collective image.

Another abstract volume was part of a complex installation made for FuoriSalone 2014 inside the spaces of Palazzo Cusani in Milan, a dark volume supported by a blue platform, to narrate the identity of Oikos, a manufacturer of paints for architecture.

The potential of the materials and colors was illustrated in the treatment of the partitions and volumes of the display, and in the narration on the upper levels, for domestic spaces where the furnishings were represented as silhouettes cut out from the walls, treated with different finishes from room to room.

The art direction of the Italian Pavilion “Le quattro stagioni” curated by Luca Zevi at the 13th Venice Architecture Biennale in 2012 called for a space, amidst the sections, with a multiscreen projection to immerse viewers in the Italian landscape.

Again in this case the theme of the ‘story’ was the primary focus of the idea of Dario Curatolo, the expression of a narrative dimension that goes beyond the idea of the trade fair stand to make every display into an intense sensory experience