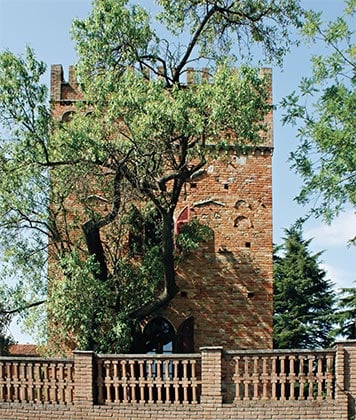 On the theme of Hybrid/Metissage, certain grafts turn out to be more than semantic, experimental, typological, because they belong in essence to the soul, as its most authentic mirror, perhaps unwittingly generating works of architecture that replicate what life has offered to the inhabitants.

This is the case of this antique, noble country home to the south of Piacenza, a fertile land of castles and battles, now the buen retiro of a Milanese entrepreneur. His great escape, to borrow a phrase from a famous film from 1963 with Steve McQueen, happens three days at a time, during weekends, when he doffs his metropolitan globetrotter garb and finds some air in the shade of an almond tree planted 500 years ago, that still looms over the panoramic balcony of the severe building that was probably built in the late 1600s. The house stands on a hilltop, accessed by a long, winding drive that passed in the midst of vineyards. The architect William Sawaya has dusted off a past full of memories, restructuring the house while conserving its identity, but also making it more luminous and fresh, in keeping with contemporary precepts of joyful living. Outside, the ‘photographic conservation’ of the image encountered, the austere multivolume architecture of the original structure, surrounded by a large park, is updated thanks to the pale tones of the stucco, in a contrast with the exposed brick of the wall of the nearby service structure with a square plan, set off by ogival windows and finished with swallowtail battlements. The restructuring is more daring on the inside: the radical updating of the physical plant systems is accompanied by volumetric reorganization of the spaces, conserving a classic hierarchy but making them more functional for the development of a personal, fluid, open approach to living. William Sawaya comments: “The architectural project, intentionally light and almost invisible, has attempted to bring out the virtues of the spaces, stripping them of superfluous additions made over the last decades. It was somehow like restoring the original dignity of a place that with the passing of time had gone gray, entering a state of torpor. Since I have known the family for a long time, and the habits and requirements of the present owner, it was not hard for me to resize, expand and create the new spaces needed for a contemporary way of living. My conconstant concern has been to reduce the impact of an trace of intervention, though without creating false originals”. The new layout puts the large living area with park view on the ground floor, along with the kitchen and a bath; the first floor of the tower contains two large bedrooms with baths; the second floor has another bedroom zone, for guests. Further up, through a hatch, one reaches the terrace–belvedere. The open-plan living area communicating with the park remains the fulcrum of the composition, of course. With a precious black fireplace in Calacatta marble and dark walnut paneling, the space is made lighter thanks to the pale finish of the wood, which extends about 70 cm away from the walls to conceal custom features and the accouterments of everyday life (bar, television, stereo, glasses, dishes, accessories), combining forces with the floor made with large sheets of biancone fossil stone and the white ceiling beams to configure a spare, sober enclosure. This is the ideal counterpart, in black and white, of the dynamic setting of the furniture, which mixes family heirlooms, travel souvenirs and many prototypes, along with the symbolic white-green-red banner of Mirco Marchelli. “We could write a paper on the value of ‘job lots’ in this house”, says the owner, “because the choice of surrounding myself with presences packed with imprecision has allowed me to discover new potential, content and suggestions, hybrids, possibilities of adaptation, anthropomorphic overtones. For example, there is a white armchair placed in the bedroom, that reminds me of my plump, cheerful aunt”. From Pop accents to the revealing of perspectives, an opening beside the fireplace leads from the living area to the dining-kitchen zone, enclosures of terse Austrian taste, uniform with aqua green nuances for the full-height paneling, which again offers storage, and becomes the absolute protagonist together with the archetypal sphere of opaque glass of the chandelier hung from one of the exposed brick vaults of the ceiling. “This is one of the zones I think is special, because it has the taste of childhood memories, of cakes baked by my mother, imperfect but unforgettable”. The nostalgia softens on the upper levels, where every room has an updated decor, a theatrical charm made of sophisticated canopy beds, colonial revival armchairs in wood and fabric, striped wallpaper with specific chromatic moods, and objects of affection. “In the end, I must admit that these rooms, made with whatever caught my eye, without excessive rigor, seem to work very nicely. But it remains a shell-house, that does not belong to me: I belong to it. In three days, I see what my life would have been like had I not chosen to do the fantastic job I do, in a context that still lets me eat food from the garden, relax under a pergola, cultivating simple pleasures”.