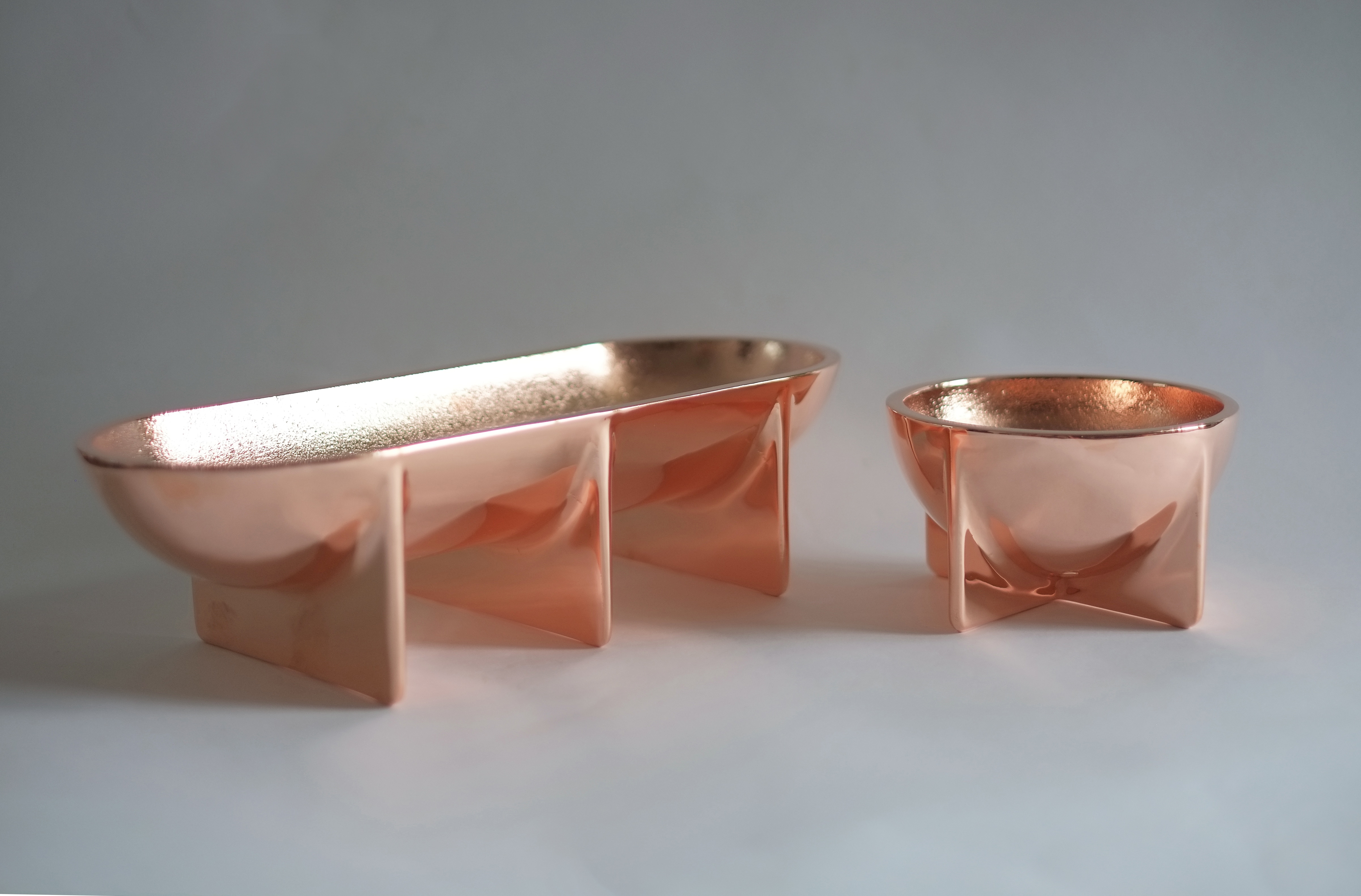 The honesty of materials

A design and self-production studio, Fort Standard was formed in Brooklyn in 2011 by Gregory Buntain and Ian Collings, friends who met at Pratt Institute and classmates at the Bauhaus in Weimar. The pragmatic approach of American training combined with the applied experimentation of the German school have led the duo to make simple objects that stand out for their honest use of materials. Tables with tops made of large stone slabs that display the joints with wooden legs, copper vessels where the material has an alternating polished and rugged surface, reflecting light in different ways, are but two examples of the focus on the intrinsic beauty of materials in projects. There is also an overtone of the perpetual in the works of Fort Standard: the objects seem like they have always existed, unafraid of the challenges of time. The two designers describe their work as “warm contemporary,” a cordial blend of crafts tradition and a more narrative kind of design. Though it is a young studio, Fort Standard has made a prolific series of furnishings, lamps and complements, also working on jewelry and toys.

From the one-off for a specific situation to small production runs, every project by the studio Assembly is conceived to transfer craft values, aesthetics of materials and art into useful objects. “We like to start by studying materials, processes and techniques, to reach a creative result,” say the two founders Pete Oyler and Nora Mattingly, both born in 1983. Assembly is a studio that began operation in 2012 but got immediate attention – Pete Oyler was named one of the best designers under 30 in the Art & Design section of Forbes. His approach is interdisciplinary: from furniture to publishing, with the annual non-profit Outpost Journal on art, design and collective public art projects in small urban areas. Nora Mattingly focuses more on product design and interiors, also working with the studio D‘Apostrophe Design. She is interested in colors, textures and crafts processes. Items like the U Chair play with the tactile qualities of materials left in a natural state, like hand-stitched cowhide, ponyskin and wood. The rigid modular repetition of the 2×2 and 2×6 tables is attenuated by the warmth and roughness of natural wood. Finally, the glass vases take the technique of glassblowing to extremes, bringing out the uniqueness of every gesture. Shards of broken glass are incorporated in the blowing phases, creating a texture based on scrap.

Feminine vision on the small scale

Founded in 2011, Egg Collective is composed of three female designers: Stephanie Beamer, Crystal Ellis and Hillary Patrie, with backgrounds in architecture, art and woodworking. They combine their knowledge to give rise to apparently simple products that reveal unexpected details. Each furnishing element is made in the in-house workshop with a community of carpenters and craftspeople who take part in the production. The goal is to maintain a direct link with local businesses, developing a dialogue and an exchange of knowledge right from the design phase. Limited production runs on a small scale, with the goal of conserving quality. From an aesthetic viewpoint the products rely on the combination of different materials and their juxtaposition in clear passages and elementary forms. The design takes the effects of time into account, as a factor of enhancement: the metals oxidize and take on a patina from the surrounding environment, making each piece unique. Surface treatments and finishes are applied by hand, using wax or oil, to leave signs of the processes, fingerprints and small flaws. The showroom in New York, adjacent to the workshop, also hosts temporary shows by local artists, not only to grant them visibility but also to stimulate contaminations of artistic expression.

A matter of details

A son of wood craftsmen of German origin, Paul Loebach is used to a “hands-on” approach to design. A pragmatic attitude that does not overlook the value of experience and the emotional ties that develop between people and objects. A graduate of the Rhode Island School of Design, in 2002 he moved to New York to work furniture designer John Davies, and in 2007 he opened his own workshop in Brooklyn. Paul thinks design should balance a traditional, recognizable image with touches of innovation. This can be seen in the X3 copper watering can, for example, which plays with the shifting and proportions of its parts, making it unusual. Or the Ora teapot, tradition in its image and the use of double insulating glass, but unusual in the semantic definition of the internal and external profile of the cup. Paul Loebach pays attention to sustainability and functional logic. The Peg seat is composed of ten pieces that can be directly interlocked by the user without glue or hardware, making it possible to ship the product in a flat package. It is easy to take apart, because as the designer says a good design has to adapt to different uses over time and, therefore, be capable of reacting to changes in an intelligent way.

Vonnegut/Kraft is a studio founded in 2011 by Katrina Vonnegut and Brian Kraft, who come from different backgrounds, respectively furniture and textile design and woodworking. Both have a personal research approach to self-production. Their goal is to make functional products with a minimal aesthetic and a particular focus on the range of colors, often soft and warm, rarely contrasting. Their furnishings are made in small series, to order, combining crafts processes and new numerical-control methods. Each piece is made in the workshop of the design duo in Sunset Park, Brooklyn, with the goal of adapting production based on the specificities of the material, as in the case of solid wood. The products can thus be adapted to the specific needs of clients, in a tailor-made approach. The proportions of the furnishings and the use of solid wood with fine details suggest the organic vision of Danish Modern, just as the impeccable workmanship and simplicity of the objects evoke the Japanese tradition. ‘Gentle’ furnishings that can exist in different settings, without ever going out of style.

Jamie Gray is a designer from Seattle who combines the profession with activity as a talent scout and creative director of one of the hottest stores in New York, Matter, which he founded in 2003. A showroom, gallery and editor for young talents, Matter is a true reference point: a place to experience the state of the art in design, local and international, getting inspiration from the careful selection and display of timeless objects, one-offs and exclusive creations. An alternative to more traditional retail situations, Matter opened first in Brooklyn, and since 2010 has also been a presence in Manhattan. The stores feature the best-known brands and designers, but also other less familiar names that find an important showcase. The house brand Matter-Made has helped to launch many independent talents, including Rich Brilliant Willing and Stephen Burks. Promising exponents in today’s displays include New York-based Henry Julier and Vonnegut Kraft, and Australia’s Jonathan Zawada. Jamie Gray relies on his own sensibilities in the choice of designers to produce or distribute. A very personal selection, influenced by a ‘quiet’ modernism that incorporates aspects of the classical and neo-primitivism. Gray doesn’t look for a purist, austere aesthetic, but functional design capable of also revealing the historical roots of the discipline, and of American crafts.

James suspension lamp in blown glass with burnished brass details - Egg Collective
The Column coffee table - Fort Standard
Ian Collings and Gregory Buntain of the studio Fort Standard
Range wooden chair with cowhide seat - Fort Standard
Copper vessels with contrasting surface - Fort Standard
The Ritter Chest with stone top, lacquered wooden drawers and bronze legs - Egg Collective
2x Glass Vases, incorporating pieces of broken glass in the blowing phase - Assembly
Nora Mattingly and Pete Oyler, Assembly studio
The designers of Egg Collective
The Wu stool/table in wood - Egg Collective
The Nutty magazine rack with bronze or brass finish - Egg Collective
The 2x6 table, based on a 12-inch module that subdivides the volume with a geometric grid - Assembly
The U chair with wooden structure, cowhide back and padded ponyskin seat - Assembly
The glass teapot for Kikkerland - Paul Loebach
The Peg chair composed of ten interlocking pieces, done in collaboration with Makers Anonymous - Paul Loebach
The Cup lamp produced by Umbra Shift - Paul Loebach
Portrait of Paul Loebach
The X3 watering can in copper, brass or with stainless steel finish, produced by Kontextür - Paul Loebach
The Origin lamp with glass diffuser - Katrina Vonnegut and Brian Kraft
The Crescent Lounge, featuring a C-joint in solid wood between the leg and the tubular cushion - Katrina Vonnegut and Brian Kraft
Katrina Vonnegut and Brian Kraft
The Relief mirror with internal compartment - Katrina Vonnegut and Brian Kraft
Portrait of Jamie Gray
The Affordances series of tables by Jonathan Zawada, distributed by Matter, plays with the juxtaposition of marble and an unusual part : a layer of exposed rubber in the connection between the top and the base - Jamie Gray
HS1 Desk by Henry Julier for Matter-Made, a piece for assembly that evokes the idea of the equipped wall behind a workbench - Jamie Gray
#Design #Projects