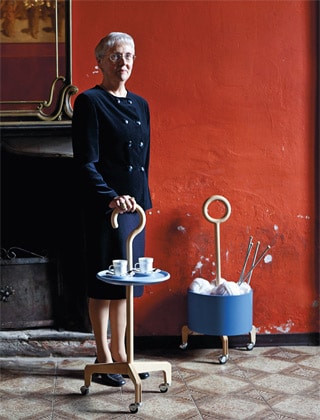 Though she comes from a family of doctors who imagined a future for her in science and medicine, since early childhood Francesca Lanzavecchia knew she wanted to be a designer.

Not only did she like drawing, but she was also a passionate collector of objects, which she enjoyed analyzing to figure out how they worked. Hence the decision to study product design at the Milan Polytechnic and then head off to Eindhoven to widen her views on design. In a masters program directed by Gijs Bakker, Francesca met Hunn Wai, an industrial designer from Singapore. The meeting of these two different design minds – focused on the relationships between objects and people (Francesca), and oriented towards research on forms and materials (Hunn) – led to the creation of the studio Lanzavecchia + Wai, which in a couple of years has gained visibility thanks to a series of experimental projects of great communicative impact. ‘No country for old men’, the work shown at the Salone Satellite 2012, is perhaps the most striking, due to the originality of its theme: design for senior citizens. It is composed of furnishings and complements conceived for those who for reasons of age or accidental have to experience domestic space with problems of hampered mobility or other physical limitations. “Together Canes”, Francesca Lanzavecchia explains, “are three supports for walking that combine the functions of a tray, a container and a small table. I got the idea when I was watching my grandmother struggle with a tray, trying to bring some coffee to my grandfather. Thinking about the sad, ugly image of all the medical gear offered to people with physical problems, I felt the need to design objects that could fit into the domestic environment in a pleasing way, true decor elements that can help people with difficulties”. The series also includes Assunta, a chair that tips to help the user stand up, and the MonoLight table lamp, with a magnifying glass to make it easier to read or to do precision work. ‘No country for old men’ is a project that expresses the most conceptual side of Lanzavecchia + Wai, and the complementary cultures of the two designers. In particular, it tells the story of Francesca, her family background, her path of training in two very different schools, from which she has gained the best of two worlds. “In Milan”, she says, “I learned the approach of the industrial designer, while in Eindhoven I learned that of the critical designer, who works on herself first and then expresses thought that can be of wider, shared interest”. The result of this encounter of visions is research – begun at the Polytechnic with a thesis on a device for heart patients, and then continued in Eindhoven with wider-ranging analysis of objects for the disabled – that investigates the concept of extreme functional quality. “I was interested”, the designer explains, “in analyzing the human aspect of function, to understand when beauty can become service. So I examined those objects that have a value of absolute necessity and also establish a relationship of intimacy with their users. I came to the conclusion that beauty can become functional when it manages to erase the stigma of imperfection, of illness and diversity”.