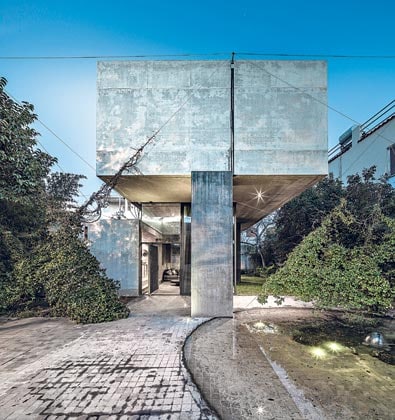 The alternative to the sleek white of minimalists the world over is a return to matter, weight, structure, the violent contrast of differences in an atmosphere that combines the postindustrial style of the American loft with the exposed concrete of modernism and the aesthetic indifference of Minimal Art. One good example can be found in Kifissia, the residential suburb of Athens where the young Tense Architecture Network team has made an apparently very strange villa, a sort of nude concrete block set on top of a solid support wall. At first glance is seems like a crude construction, almost an industrial facility or a water tank. But a closer look reveals that the basic block is full of imagination and surprises. This effect will be even more complete when plants invade the metal grid, and when two other equally boxy and precise volumes are added to the composition. Inside, the volumetric layout offers a simple sequence of spaces with very careful control of natural light: the living room has the cool shade of a portico that forms a contrast with the stairwell, in full light. The kitchen and dining area is sheltered by a continuous wall that produces a dense luminosity, reinforced by the burnished crystals of the long dining table made of four parts, a custom piece designed by the architects. In the living room of the lower level the light enters in abundance through the transparent stairwell. The upper level contains the bedrooms, that of the parents and the larger space for two young children; here the natural light is strong, but will be filtered (when the plants have grown) and tempered by the pergola. For the moment, with the building still nude, what stands out is the impressive tectonic system that transforms a small construction into an authoritative, imposing structure, almost a monument. The risk of being rhetorical is banished by the brutal, crude approach, bringing out the rugged character of the material. Brutalism, born with the exposed reinforced concrete used by Le Corbusier after World War II, returns today in a completely different spirit. There is no longer the technological emphasis on industrial materials, since no one would be enchanted today by the aesthetic of machinery and mechanical production. Cement has simply become a basic material, by now, and we may even have seen too much of it. But today’s neo-Brutalism seems like a protest, or at least an alternative, to the minimalism of the 1990s, its total white, its obsession with polished surfaces and the concealment of the density of materials, structures and constructive details. So pure image is replaced by a sculptural materiality where the sensory and emotional spheres take over. In the house at Kifissia, the perception of the building shifts from visual to tactile, from the eye to the hand and the foot, with the rugged walls of rough cement, the black basalt floors, the smooth steel surfaces of the staircase and the roof pergola.