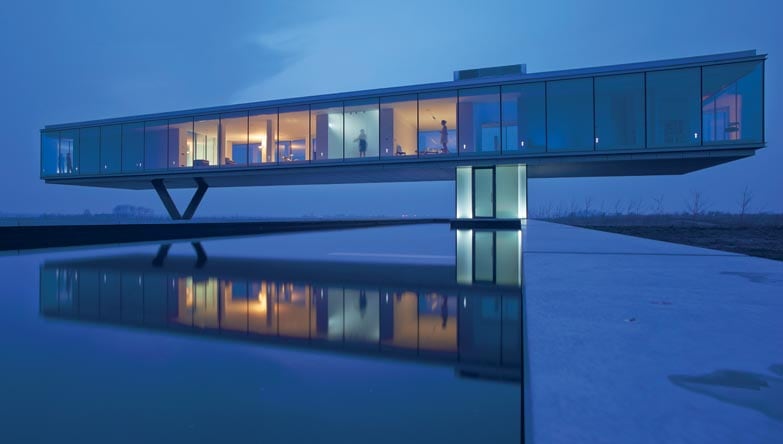 The name of Villa Kogelhof is already striking.

In Dutch, in fact, ‘kogel’ means bullet and ‘hof’ means courtyard (it is said that during the excavation old lead bullets were found, because at the end of the 1700s this patch of land in the Dutch countryside was the site of a bitter battle between Holland and France). But Villa Kogelhof has also struck the jury composed of 200 architects of the prestigious American Architizer A+ awards for 2014, taking first place in two categories (sustainability and single-family homes), also gaining praise from by popular acclaim through votes on the web platform, thus becoming the only project on which the views of the ‘web audience’ and the jury of architects coincided. The owner of the house, Ton Zwijnenburg, a Dutch produce magnate, was also surprised when together with the architect Paul de Ruiter he won the Dedalo Minosse International Prize, a unique honor that puts the accent on the client: the goal of the prize, in fact, is to demonstrate that quality architecture can happen only through an exemplary client-designer relationship. This is just what has happened with Villa Kogenhof, as narrated by its architect, Paul de Ruiter, the Dutch designer who operates on an international scale from his (eco) studio in Amsterdam. Did you get along well with this client? Absolutely. It was a fertile relationship: with Ton we worked as an exceptional team. We were on the same wavelength: we shared courage, determination and also the honors! How did the idea of a house like a bridge over the landscape come about? The client’s objective was to create an abstract, clean form that would not ‘disturb’ the nature. This is why I thought about a transparent, neutral glass box, placed orthogonally on a concrete base that contains a lake. The formal result produces two parallelepipeds: one below ground, the other floating, supported by two ‘legs,’ a V-shaped pillar and the staircase module that offers access to the interior. How does the house establish a dialogue with the surroundings? The villa totally ‘belongs’ to the landscape. The challenge was to insert the building in the context of a wider-ranging project of territorial renewal: I am talking about the Zeeland area (a province of southwestern Holland). Ton, the owner, had played an active role in this project, planting as many as 70,000 trees and creating a lake that has become the habitat of many wild animals. In exchange for this, he was granted a permit to build his own home… And of course the house had to have particular formal and constructive characteristics… Naturally. The choice of glass makes the volume light, granting complete transparency for light and landscape. The house looks out onto nature, with large floor-to-ceiling glazings, for great views of the countryside. But Villa Kogelhof respects nature in other ways as well: it is a 360-degree sustainable construction because it produces its own energy, heats its own water and recycles its own waste. In short, it has almost no environmental impact.