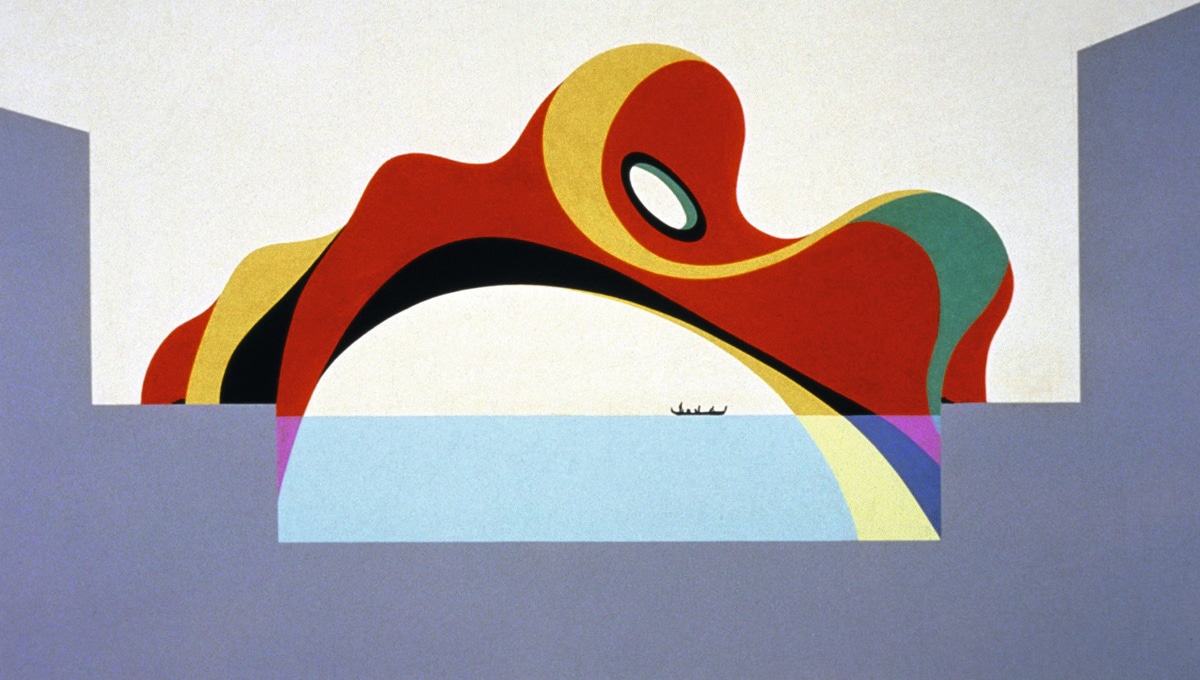 Forty years ago Antonia Jannone organized, in her gallery in Milan, the first group show of architectural drawings. Her intuition was that the discipline of drawing, in its primary forms (sketching and invention) and more constructed ones (technical, perspective, isometric), could constitute a specific aesthetic, and not be seen simply as what comes prior to the construction of an architectural artifact.

Over the years the work of masters like Aldo Rossi, Ettore Sottsass, Raimund Abraham, Hans Hollein and many others has proved that this assumption was correct, revealing the conceptual and formal richness of the graphic work of architects. As a form of philosophy and theory, in which words are replaced by images, evocative, allusive, allegorical and metaphorical of a universe that does not exist and probably will not exist, if not in the more banal forms of partial and fragmentary construction of urban panoramas.

With 75 drawings by 42 different architects, the exhibition “Una galleria lunga 40 anni” organized in the spring by the Architects’ Association of Milan at Galleria Antonia Jannone put the accent on drawn architecture and its visionary approach. A theme discussed for the occasion with my friend Alessandro Mendini.

Franco Raggi: What do you think about the theme proposed by the exhibition?

Alessandro Mendini: You did it, so you tell me.

F.R.: I think architectural drawing as a specific category doesn’t exist. Architects draw as part of their work, while the exhibition featured ‘expressive projects’ that at times have to do with the buildings one thinks of and makes, as in the case of Vittorio Gregotti or that of Gabetti & Isola, but are often mental landscapes, poetic, surreal, metaphysical visions. Aldo Rossi, for example, made architecture almost a pretext in his drawings for the construction of a visionary setting, where architecture is the place of theoretical representation. The same could be said of Luigi Serafini, who even designs a parallel world, while Raimund Abraham or Gaetano Pesce explore the primordial psychological crannies of inhabited space through drawing…

A.M.: You’re getting me confused. In my view, instead, the category of architectural drawing exists and its subject is architecture, just as happens for the category of the figure, or abstract drawing. What you have listed are the various directions this expressive form can take. This is true of the descriptive method of Gregotti, which however is charged, depending on the moment, with the expressive value of collaborators like Purini, who introduced almost metaphysical values and refined draftsmanship…

F.R.: Speaking of that, I am fascinated by the sign of Alvaro Siza, who draws as he thinks and thinks by drawing, overlapping on the page perspectives, details, landscapes, persons and projects, with a continuous line he makes emerge from the tangle of figures.

A.M.: I am reminded of the way of drawing of Tommaso Buzzi, who was my professor of drawing: he would get in front of the tower of Filarete, for example, and observe it, drawing without ever looking at the paper. His hand was connected directly to his eye; only at the end would he look down, and find a fantastic, almost Piranesian drawing. Buzzi was the designer of the La Scarzuola city-theater in Umbria, a complex of a-historical architectural citations, visionary but real, a fantasy similar to that of the nearby park of Bomarzo, and the Tarot Garden, also not far from there, of Niki de Saint Phalle at Garavicchio.

F.R.: I believe drawing is the main tool to approach this visionary content that upsets functional and technical codes, bringing architecture back to its sense as figured three-dimensional thought. Have there been any great architects who did not know how to draw?

A.M.: I remember one evening at the home of Vittoriano Viganò, where Ernesto Nathan Rogers messed up the pages of a notebook, saying “I don’t know how to draw.” It was probably true. Which means that you can also make architecture by using words. But I prefer Aldo Rossi who had clear relations with Palladio and Sironi, or someone like Arduino Cantafora who is linked to Renaissance perspective. I believe drawing has a long history in modern architecture; the proof is the figurative block presented in the exhibition at Galleria Jannone, which conveys the moment of graphic triumph of architectural invention, now absorbed by the computer, and there is no turning back.

F.R.: This history of modern architecture, however, is full of relationships with the avant-gardes of the figurative arts: Neo-Plasticism, for Rietveld, Cubism for Le Corbusier, Expressionism for Mendelsohn. Ettore Sottsass said, talking about his figurative world and his projects: “I am the last Neo-Plastic artist.” Today the representation of architecture seems to have lost these vital ties, these assonances, this avowed or underground contacts. The gap between the representation of architecture and drawing seems impossible to bridge. Representation has become ‘illustration,’ pure visuals, which in renderings uses the methods of advertising, while drawing emerges more and more as a kind of ‘signature’ for starchitects. I remember your drawings from the 1970s, like the “Garrote,” the “Self-Crucifixion Kit,” the “Up there” chairs…

A.M.: Today I no longer make that kind of drawing. I don’t sit down in front of a piece of paper to produce an artistic image. I use drawing to connect notions, situations, empathies, to suggest continuities, to order phenomena.

F.R.: In the end you make maps where the drawing becomes writing and writing becomes drawing. You construct a stylematic, a two-dimensional figurative calligraphy that is linked to graphics.

A.M.: When I was young I was influenced by the drawing of Saul Steinberg. I was introduced to him by Rogers, who took me one day to see the lobby of a building from the 1800s on Via Bigli that contained his works. I was fascinated by that terse, synthetic, precise sign. For the same reasons, I liked the French artists Dubout and Sempé, and in fact I wanted to be a cartoonist. Then I realized that my drawing ability was limited to my architectural studies. I transformed architecture into a graphic game; then I stopped drawing for ten years. I began again when it returned to being a form of narration of ideas, for me.

F.R.: Today the relationship between drawing and project has changed. Drawing follows the project and becomes just a banal illustrative and graphic reduction. What would you tell a young person today, who can design by starting with a CAD program?

A.M.: That it is not possible to design starting with the tools of the computer. That sketching and drawing are indispensable tools for the genesis of any project.

F.R.: Sketching is a form of projecting thought; the project in the mind is vague, confused, hidden, it has to be revealed to itself, liberated, sized, given figure… Only sketching puts the project into relation with a concrete future… at least for me. And then the sketch narrates, it is made of revisions, mistakes, erasures, overlaps, varied repetitions, changes, comparisons, things eliminated. It is useful to engage in this mental/manual discipline, though it doesn’t matter if you can draw well, in the traditional artistic sense.

A.M.: It’s true, those who draw with great skill are in trouble from the start. I was getting into trouble like that, but I stopped in time…