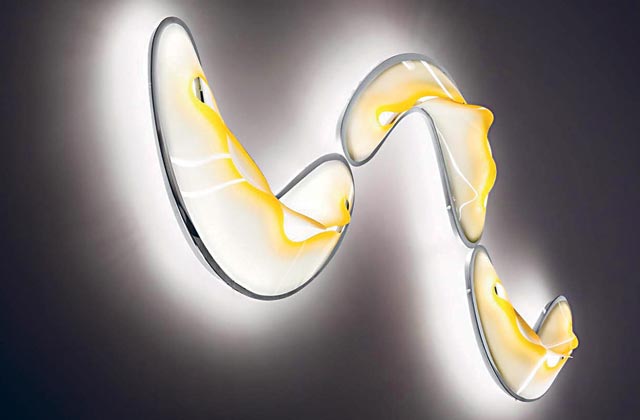 Nigel Coates sums up the qualities that help the English to forecast trends: a romantic, sensual bent that led him to visit Italian baroque gardens and then, in 1987, to get himself a home in Tuscany, where he still “drops by” at least 8 times a year.

He also has a punk attitude, against nostalgia, destabilizing, that makes him live in the here and now. His excellent Italian, with some regional inflections, bears witness to the age-old love story with Italy of English art buffs; yet his training was not based on Renaissance memories, but on radical architecture, which he has assiduously studied since his first trips to our country. His prolific portfolio of products, made mostly for Italian firms, contains items that are always imagined in a context, an interior that has to be the mirror of the soul of its inhabitants, “floating between earth and sky” and accompanied, always, by a melodic soundtrack: Italian, Brazilian, Portuguese music and, above all, David Bowie. “The interior,” Nigel says, “should be extra, always a bit over the top. It is a language that has to be spoken in an unexpected way. I am not interested in mere functional quality. Design should narrate, stimulate, construct a relationship of an instinctual nature, creating a special alchemy. Ideas,” he continues, “can be translated into sensorial experience, capable of captivating people without theoretical filters. The inhabitant- interior relationship has to be regulated, as in the animal kingdom, by pheromones.” Links to the world of animals are always there in his production. From the base of the table in 2009, a limited edition of 12 pieces, composed of a group of pandas, to the legs of the stools for Fratelli Boffi, similar to those of giraffes, or those of the Pointer table that are like those of the dog of the same name, or the saddle-seat, made for riding… His work is like a compendium of his varied training: from the approach to the Florentine world of radical design, which led him to experiment with visionary architecture and projects, to his teaching experience at the Architectural Association; from the Japanese period, in which with the surprising Bongo Cafe he proposed a vision of the future as bricolage of the present, something straight out of the sets of Blade Runner (1982), to the encounter with Poltronova, which asked him to design a collection in 1989; all the way to the experience with Swarovski Crystal Palace (2002) and the collaboration with Fornasetti (2002). He doesn’t think of design as a discipline, but as a phenomenon with a regal aura. He believes the project, far from the egalitarian idealism of the Bauhaus, can become a powerful medium of self-expression and work as a talisman. “In the interior,” he says, “every piece should have a soul that conveys poetry and expresses strong emotions in a simple, instinctive way.” His habitat visions, ‘Casa Reale’ (2011) and ‘Baroccabilly’ (2012), are a mixture of special objects, sensual details, voluptuous lines, opulent materials combined with essential forms conceived to produce fascination, almost in a shamanic way. The ideal inhabitant of his domestic figurations is Jean Des Esseintes, protagonist of the story À rebours by Joris Karl Huysmans (1884), who retreated into an artistic world of his own creation, filled with obsessions and fetishes. “To dwell,” he concludes, “is a sort of voyeuristic voyage full of dangerous curves.” The danger of Nigel is playful, never damaging, though at times it can be a bit slippery. His wide range of creations, from furniture to lighting to objects, forms a catalogue of anthropomorphic and zoomorphic fantasies, of symbols that are never aggressive, always benevolent, easy to understand and to love, also for their way of balancing between modernity and tradition, the commonplace and the unexpected. A special chapter in Nigel’s career away from the demands of the market and the influences of styles, keeping faith with his romantic/punk DNA expressed with lightness, is represented by the art direction of Slamp, the lighting manufacturer specializing in new-generation materials. “Operating as an art director,” he reasons, “means working together, in a humble way, with the company and with the designers. Roberto Ziliani, the owner, says we are complementary: he’s the pasta and I’m the sauce.” This well-balanced recipe leads to special and affordable products, like the suspension lamps of the Avia and Aria series, composed of 50 layers of Cristalflex®, designed by Zaha Hadid and presented at Euroluce 2013. Coates is fascinated by materials and he knows how to expertly bring out their best. Glass was the theme of his recent exhibition in London, Handblown, which featured two different working approaches, both done by the master craftsmen with whom Nigel usually works, both in Italy and in England: traditional glass blowing, and the shaping of borosilicate glass. In the Carry Ardits collection of vases and lamps Nigel focuses on the fluidity of the material, giving the vases slender arms that support thin disks in a delicate balance. In the Flame series he makes the glass have more body, to reproduce the leaping of flames. The Tulip vases, finally, bring out the fragile nature of the material, making it palpitate, like the petals of flowers.

Two vases in borosilicate glass from the Carry Ardits collection for the Secondome gallery.