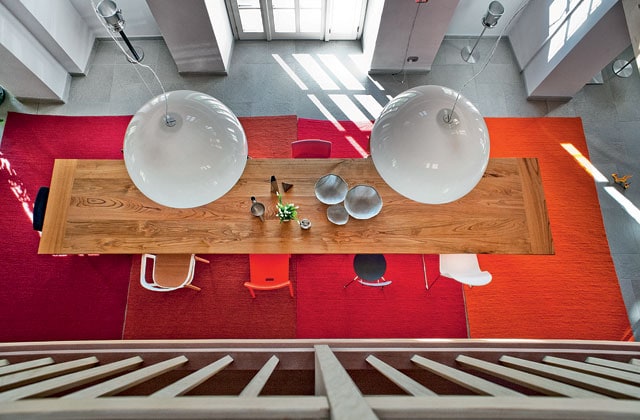 A life project, a vision for the future. The Times They Are a-Changin’, sings Dylan the bard. And his voice seems to hover, as in a film soundtrack, over the pacific, verdant stretch of land located in Pratolungo, part of Pettenasco, gently sloping toward Lake Orta and facing the island of San Giulio, the patron of this hilly region in northern Piedmont.

This is where Alberto Alessi, president of Alessi, has decided to restore an old farm estate called Villa Fortis, which dates back to the 17th century, when the owner – a certain Eugenia Fortis – gave that name to the property that already existed in the documentation of the era of Austrian rule.

The original farmhouse was then incorporated in a complex of buildings whose definitive configuration dates back more or less to the start of the 1800s. Only the land holdings have been altered, and now cover an area of about six hectares. “When I acquired the property – Alessi recalls – the buildings had been abandoned and the land was overgrown with wild vegetation”. So in 2001 a long, laborious project began to salvage the place, with the aim of setting some of it aside for residential use, and some for the production and aging of wine. Land once used for vineyards was returned to that role, applying the principles of organic farming, sending a forceful signal regarding the reutilization of the territory in an ecosustainable perspective. For the architectural part, the project was assigned to Alessandro and Francesco Mendini with Alex Mocika, who directly supervised the various phases, helped by Eduardo Hess and Paivi Viiki, Feng Shui experts. For the vineyards, the agronomist Patrizio Gasparinetti was joined by the French biodynamics expert Jacques Mell. “The restoration was practically philological. And this is a particularly complex philology as well, because this group of buildings has undergone many modifications over the centuries, leading us to make a freer reinterpretation”, Francesco Mendini explains. The local authorities recommended that the original walls be conserved as completely as possible. As there were no foundations, excavation was required to construct them. During the excavation work the walls, made of earth, rocks and a bit of lime, began to crumble. “All the original stones of the construction – Alessandro Mendini points out – have been carefully salvaged. Most of them have been reutilized to make the enclosure walls of the garden, window sills, steps”. Alberto Alessi’s program was very clear and succinct: “Simplicity, functional quality, Feng Shui, view of the island of San Giulio, visual and aural communication among all the parts of the house”. And so it is. “We have not used a style, here – Mendini says – we have gone along with an anthropology of simplicity. We could call it a project of extreme calm. Though it is not what we are accustomed to doing, it has brought us great satisfaction”. From the entrance gate to the property one descends a drive flanked by chestnut trees, leading to the complex, where there is an immediate view of the vineyards that cover an area of about 20,000 sq meters, with rows of Chardonnay and Pinot Noir. Walking along the side of the guesthouse, one reaches the main entrance of the house on two levels plus an attic (about 400 sq meters of total floorspace). Once inside, to the right there is a large Tabu wood panel with geometric inlays by Alessandro Mendini, framing the door of the studio of Alessi’s wife, Laura, and the maître de chais: a role played with complicity and enthusiasm by the talented young oenologist Monica Rossetti. Walking down a few steps one reaches the large open living area with a rectangular layout, a fireplace in stone and chestnut wood. The wood, like that of the long central dining table – an idea of Alberto Alessi – the outdoor table and the bookcase on the upper level, comes from several ailing trees found on the property. The left wall, facing uphill, has glass and oak cabinets by Valcucine. In front of it windows offer a view of the terraced garden. On the opposite side there is an area for preparation and cooking of food, with the half-moon island by LaCucinaAlessi in a tailor-made version. From here, through a glass door, one reaches the very luminous spa with its swimming pool, of about 200 sq meters. From the kitchen zone, through another door, it is also possible to directly reach the cellars for the aging of wines, with an area for casks and a cuvier with a loft for winery operations. The upper level of the house is reached by means of a flight of recycled stone steps that leads first to a bookcase, overlooking the lower level, and then to the bedrooms. The attic is further up, and features designer furnishings from the personal collection of the master of the house. Finally, a spiral wrought iron staircase leads to the tower, for a breathtaking view of the surrounding landscape. The project might be called “zero-kilometer” architecture, because the materials used for the restoration have all been salvaged from the old agricultural complex, and are thus in keeping with the local construction tradition: a virtuous example of building with low environmental impact. The work has not been fully completed, and a number of details remain to be finished. But Alberto Alessi is already making plans for his Domaine. This year a third hectare of vineyards will be added. In 2012, the year slated for the debut of the wines of Terra–ae, the winery should produce at least 8000 bottles. But what has happened to this man famous for innovation? Has he suddenly become a conservative, though an enlightened one? “Here, as in the factory –Alessi replies – I feel like a good gardener: sensitive, careful, patient. The good gardener sows what he thinks we be needed, but above all he prepares his field and takes care of the first new sprouts… and he knows he can rely on the unexpected seeds brought in by the wind…”. A metaphor that is effectively illustrated in the new interpretation of the Triennale Design Museum in Milan, curated by the Piedmontbased entrepreneur and focused on the “factories of Italian design”.