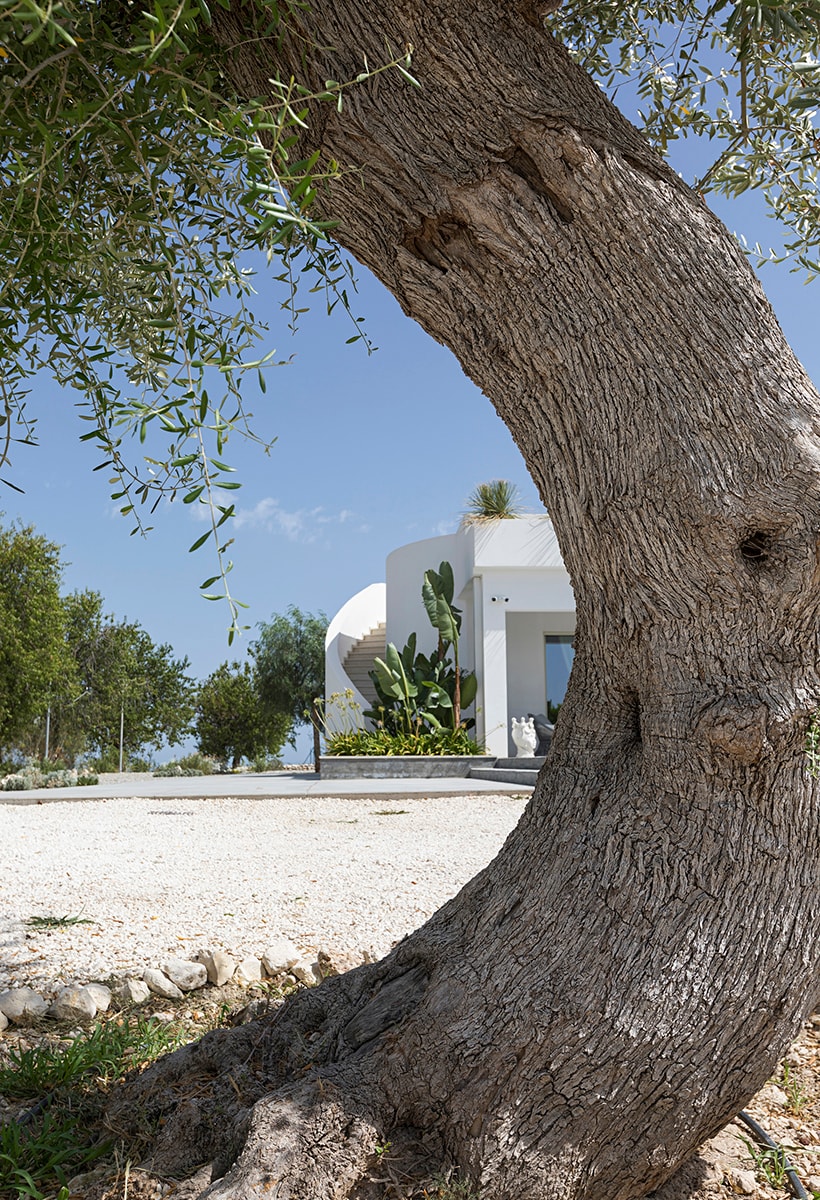 In Sicily, a house and a project where the protagonist is light, filtered by unusual devices that enhance the context, interpreting traditional imagery in an innovative way

It was necessary to take on another role, that of an orchestra conductor, from workshops to academies, to realize the dream of a family buen retiro that would avoid any banal transcriptions of the Sicilian tradition. “We noticed this building from the 1970s when we visited friends and designers from Milan and the international scene here in Noto, people who love Made in Italy. It had no particular architectural character, but there were definite advantages,” says the host at Fior di Noto, the name chosen as a tribute to the welcoming flowers that appear, in the span of one night, on the cacti in the garden.

“The 200 sqm on a single level, with a roof terrace of the same size that is ideal for parties, are on a lot of about 20,000 sqm, one kilometer from the center of Noto and already outside the city, in the first hilly zone, which is very cool and breezy,” the owner says. “We are close to one of the most fascinating Baroque sites of this side of the Sicilian coast, listed by UNESCO; at the same time, we are far from everything, completely isolated. The view extends for 360 degrees, from the cathedral and the Chiesa del Crocifisso in Noto to the sea, all the way to Capo Passero. All around us there is absolute silence, and nature. Almond, olive, pomegranate, carob trees, many already grown fruit trees that offer apricots, plums, figs, lemons, oranges and tangerines. I have a small portion of Sicilian blood in me, so I feel a sense of harmony with this place, though I never would have imagined living in such a contemporary house.” 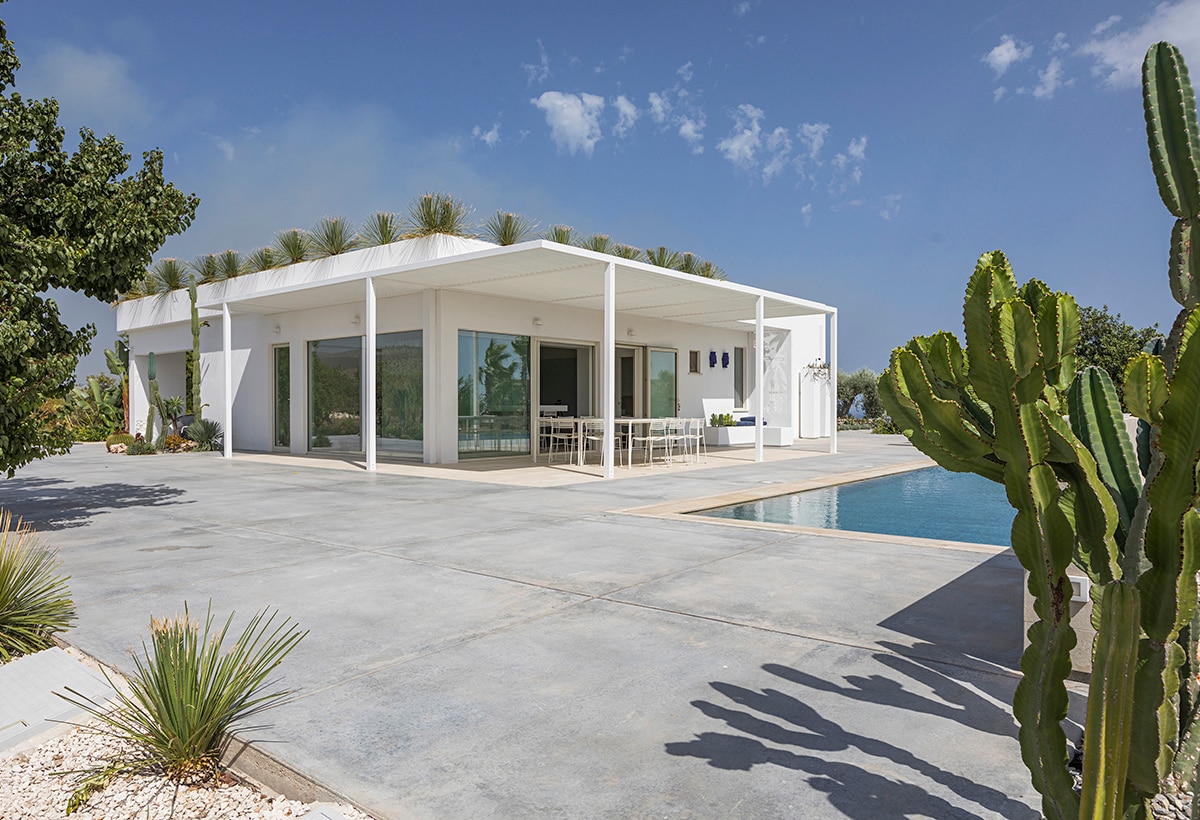 6
View of the overall volume of the house, renovated with local craftsmen of Edil-D from Messina, also with a branch in Milan.

The project, shared with the family, developed in a series of choices and solutions, with the support of a team of local professionals and very efficient artisans. In the overwhelming sunlight of these climes, it was necessary to find a language suitable for mediation with a contemporary habitat dimension that would formulate, in a process of abstraction and synthesis, another form, making use of the surrounding elements. For the exteriors, the other form has become that of a modern matrix, inspired by Le Corbusier, envisioned by Andrea Campioli, an architecture student at the Milan Polytechnic, which the clients, free of prejudices or preset clichés, welcomed and encouraged.

“A form without mixtures or contaminations, conveying the perception of a sum of pure volumes in the light, interpreted with essential, monochrome lines and a few materials found nearby, such as Modica stone, concrete, white silicate-treated stucco,” says Andrea Campioli. In the overall process of updating of the existing complex, this approach permitted seamless integration of a long portico, expanding the livability of the interior space, and the curved, constraining figure of the external staircase, leading to the roof.

“
We worked on the control of the light in various ways. Through the design of the openings, we sought absolute transparency, especially in the main direction leading from the entrance to the living area."

In the new arrangement the structure takes on solidity, with safe physical plant systems and certified compliance with anti-seismic measures, thanks to the expert intervention of the engineer-architect Alberto Sisti, who also worked on “making the building work in a passive way, with an independent well and internal discharge of water,” he explains. For the interiors, to create a double visual perspective on the city and its domes, on one side, and the sea on the other, while bringing open fluidity to the spaces in dialogue with the outside world, it was necessary to rotate the original composition and orientation of the rooms, demolishing walls and opening up windows.

This part of the project was carried out by the architect Francesco Sforza of the studio C28 Collaboratorio di progettazione, based in Fabriano and Verona, who also designed the pergola and the custom outdoor furnishings. All in collaboration with the owner, who says: “To pursue a principle of reduction to the essential in a dated structure, where it would make no sense to introduce Baroque tones, with my husband I let myself be inspired by the memory of the grates of the monastery of San Salvatore in Noto, and the places immortalized in the 1990s by Franco Zeffirelli in the film Sparrow. This led to the idea of a pervasively textured landscape, which in tune with the purified lines of the building would filter light, during the day, through a series of grilles in white micro-perforated sheet metal, decorated with motifs from the local tradition, while at night this system comes alive like a theatrical game of lanterns.” 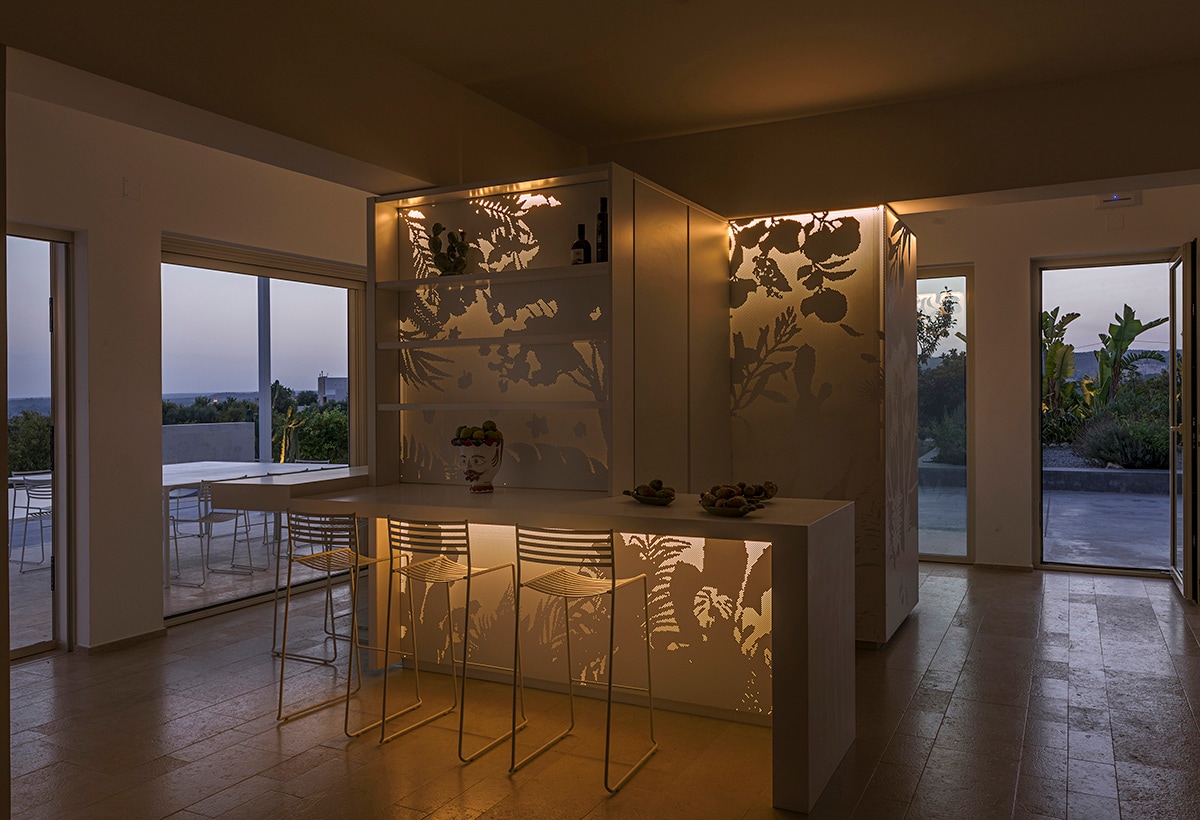 5
The lantern-like volume of great narrative impact resolves the interior design of the living area, incorporating wardrobes, open shelving and refrigerators for the adjacent kitchen, along with the breakfast counter in white Corian, welded in a single cantilevered block. It is completely covered with microperforated and decorated white panels that reach almost up to the ceiling. Produced by Funny Metal of Cerreto d’Esi, Fabriano, it was designed by Francesco Sforza / C28 Collaboratorio di progettazione, with Andrea Strippoli (3D modeling and rendering) and Samuele Cipriani (graphic design). Stools by EMU, supplied by Loreto Interni Noto – Siracusa.

A choreography that required a very sophisticated technical interpretation, and great crafts know-how, as an added value of the project. Francesco Sforza explains: “We worked on the control of the light in various ways. Through the design of the openings, we sought absolute transparency, especially in the main direction leading from the entrance to the living area. The unification of the two spaces is underlined by the Modica stone, applied as a connective tissue for the internal floors and the outdoor paving under the pergola, and also for the long bench-shelf that underscores the longitudinal section of the space, with a perspective line towards the back window, facing the garden.”

“
We are close to one of the most fascinating Baroque sites of this side of the Sicilian coast, listed by UNESCO; at the same time,we are far from everything, completely isolated. The view extends for 360 degrees, from the cathedral and the Chiesa del Crocifisso in Noto to the sea, all the way to Capo Passero."

In front of the bench, the flexible layout calls for a low, transformable island of divans, with the colors of the sea. The kitchen also extends on this side, a single block of white Corian, bordered by a large niche, which is not perceptible as an operative zone. The paneling along the wall creates a sort of boiserie, flanked by two doors. One opens towards the laundry-pantry, the other leads to the nighttime zone, with four double bedrooms, two with views of the sea and two looking towards the olive trees. Each bedroom has its own bathroom faced in Modica stone, and a private entrance from the outside. On the other side of the living area, a minimal dining table is placed at the center of the space, where the backlit microperforated panels of sheet metal decorated with botanical motifs generates an evocative effect at night, when in a game of correspondences it is transformed into fluid embroideries and stylized projections of silhouettes of cacti and palm trees, visible through the glazing.

“Actually, this volume of great narrative force has also solved a spatial problem,” Sforza says, “that of a pillar standing right at the center of the living area. It has been incorporated in the structure that reaches almost up to the ceiling, containing functional elements, a wardrobe, two refrigerators and a cantilevered breakfast counter, also in white Corian.” In the evolution of the project, each of the four bedrooms has a lantern of its own. Here the decorations in the microperforated steel, painted white, form motifs inspired by Sicilian imagery, which the lights inside the panels transform into other shadows and dreamy stories on the wardrobe cabinets and the headboards of the beds: fish, seaweed, coral, fragments of marine landscape, the Trinacria, Moorish heads, the mosaic in the secret garden of Palazzo dei Normanni in Palermo... 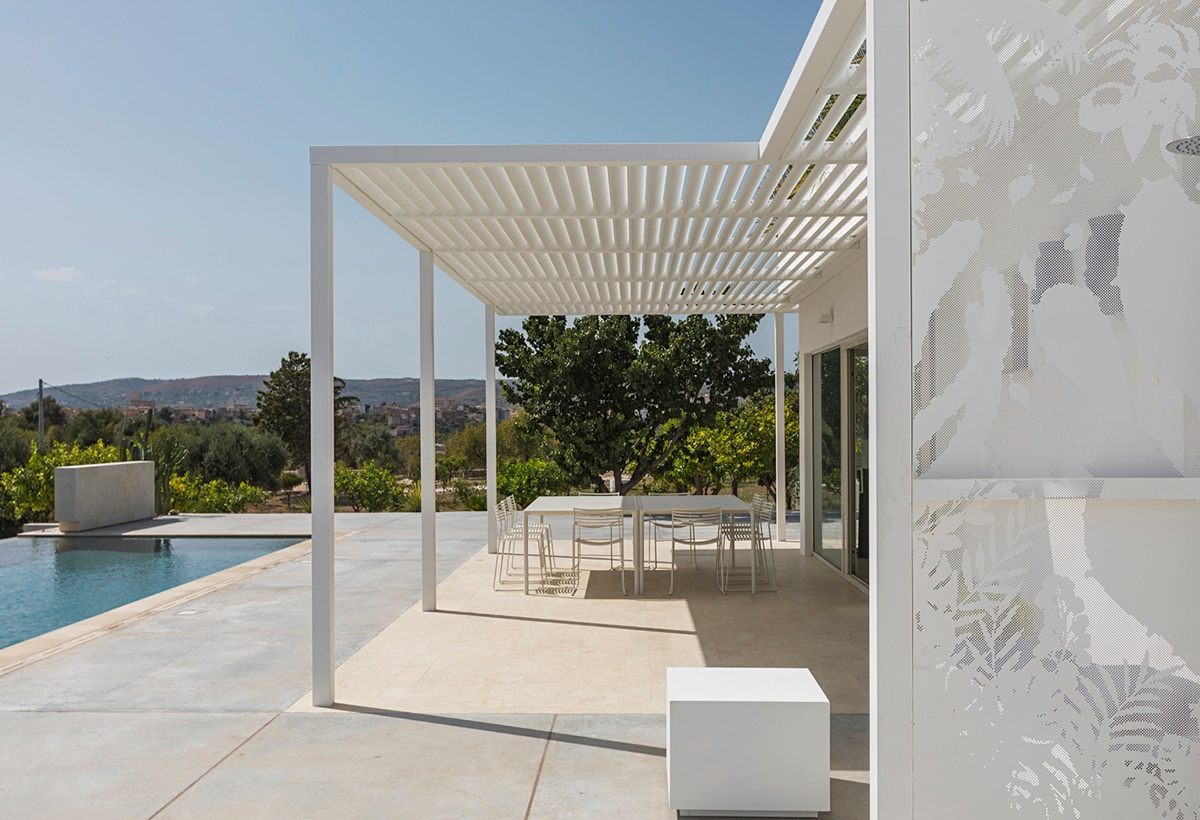 7
Views of the pergola structure in white painted iron that forms an important filter-space between interiors and the outside, expanding the sense of outdoor livability. Designed by Francesco Sforza, it has been made by hand by S.O.L.F.A of Fabriano.

A divertissement to represent the typical spirit of the place, also through unusual furnishings and objects, triggering almost disorienting effects. Outside, on the other hand, where well gauged clusters and scattering of plants redesign the garden in various full and empty zones, the leading role is played by a pergola that acts as the most important filter-space of the harmony achieved in the dialogue between architecture and nature, inside and outside. “We have followed the path of the sunlight to find the perfect position for the pergola, which has been customized with structural thicknesses that would be impossible to make with industrialized products. This is the object of which I’m proudest,” says Sforza.

“
We have followed the path of the sunlight to find the perfect position for the pergola, which has been customized with structural thicknesses that would be impossible to make with industrialized products."

“It rests on the ground with slender profiles, like those of the beams, not following a uniform rhythm but dilating or contracting in relation to the angle of the sun’s rays in the warmer hours of the day, while making the presence of the poolside showers more discreet.” The large infinity pool (18 x 4 meters) was a must for the athletic lifestyle of the owner. Study of the levels of the terrain has made it possible to build the pool in a zone shaded by the new palm grove, with a view of the sea. The natural gray concrete in large slabs utilized for the facings does the rest. Here the color of the light on the surfaces shifts into a different spectrum, reflecting the hues of sky and sun, depending on the time of day and the weather conditions.