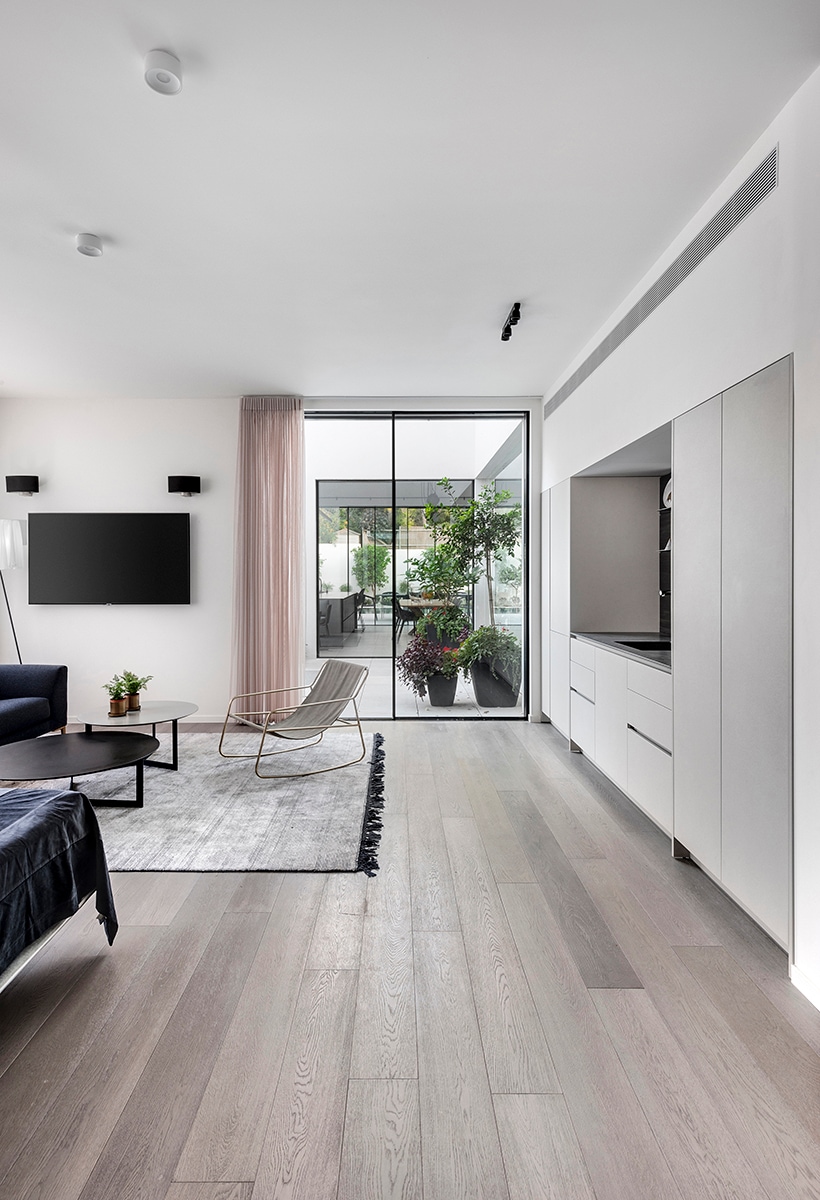 In Tel Aviv, a serene, luminous home with design made to measure and modernism with a soft touch, to transform disability into comfort and quality of life

In an exclusive residential zone near Tel Aviv, the White City of Bauhaus style, imported from Germany in the 1920-30s with its paradigms of architectural reference (function, light, simplicity of forms, craftsmanship), this new single-family dwelling has been created by the interior designer Nurit Geffen for a couple and their three children.


Nurit Geffen
°
The Nurit Geffen interior design studio divides the activity between the design of luxury apartments, penthouses, private homes, offices and commercial spaces. The work includes project management and close supervision, from start to finish, offering clients a unique and inspiring interior design along with efficient project management. The way of working in the studio places the lifestyles, behaviors and needs of each client at the center, and implements them in personalized design. The customer's personal experience is at the center of the process, involving him in the project, in its variants, combining contemporary and classic trends.

“I have had the privilege of working on a home for special people, and the commitment has been as great as the satisfaction of creating a space that will allow the family to cope with a complicated situation,” the Israeli interior designer explains, fresh from the prestigious honor for Houzz in the A'Design Award & Competition, for the Office Design category. Geffen is known for her austere, humanist approach, interpreted in the expression of design Made in Italy at the highest levels, with a vivid focus on practicality. Along the pathway of that “Less is More” uttered by Mies, which has formed and shaped her vision in the world of design.

In this case, the value of concreteness is applied to the need to find suitable solutions for a woman in a difficult situation: “The mother has undergone surgery for a herniated disk, leading to irreversible damage that has forced her to remain in bed at most of the times,” Geffen explains. “We had to find a positive, optimistic atmosphere. It took me three years. I knew that the dream and hope represented by the new house were enormous, and I had to make them come true although the situation made it problematic,” she continues. “I concentrated on stimulating the involvement of everyone during the creative process, especially the children who seemed to be less interested in the project, even regarding the spaces set aside for them. I tried to convey the implications of certain functional decisions, which I then had to make on their account.”

4
The glass front opening to the terrace paved in gray-titanium natural stone, with the swimming pool lined in green stone from Guatemala, including a Jacuzzi hydromassage tub. For the outdoor furnishings: table by Mindo and chairs by Garden Art.

After all, it is a well-known fact that rooms represent our inner needs, and that our living environment can give a lot, but also take it away. A large space (430 square meters) with good proportions – the building is organized on three above-ground levels plus a basement, with two blocks that embrace an internal patio, in keeping with a rigorous orthogonal geometric scheme of sober, essential forms, where the white color forms a contrast with slender casements in black metal – aided the designer in her efforts. The aim was to cross physical and symbolic boundaries with a human touch, based first of all on the study of proxemics and sensorial factors in the choice of materials, the layout of spaces and furnishings. After the entrance door in bright blue, which opens to reveal the terrace and the patio uniformly paved in gray-titanium natural stone to underline the connection between the two wings of the house, the sensation is immediately one of airy lightness, luminosity and harmony.

“
I concentrated on stimulating the involvement of everyone during the creative process, especially the children who seemed to be less interested in the project, even regarding the spaces set aside for them. I tried to convey the implications of certain functional decisions, which I then had to make on their account."

To amplify the outdoor views in the domestic landscape, taking in a precious swimming pool with a hydromassage tub lined in green stone from Guatemala, the interiors are balanced with well-placed voids and transparencies, permeable to the gaze and the natural light: a precise dematerialization of the overall volume oriented to obtain rooms for living together, but also for moments of solitude. On the ground floor the living-dining-kitchen zones, gathered in a single open space, are divided only in terms of perception, below a traditional double-pitched roof with white painted wooden beams. 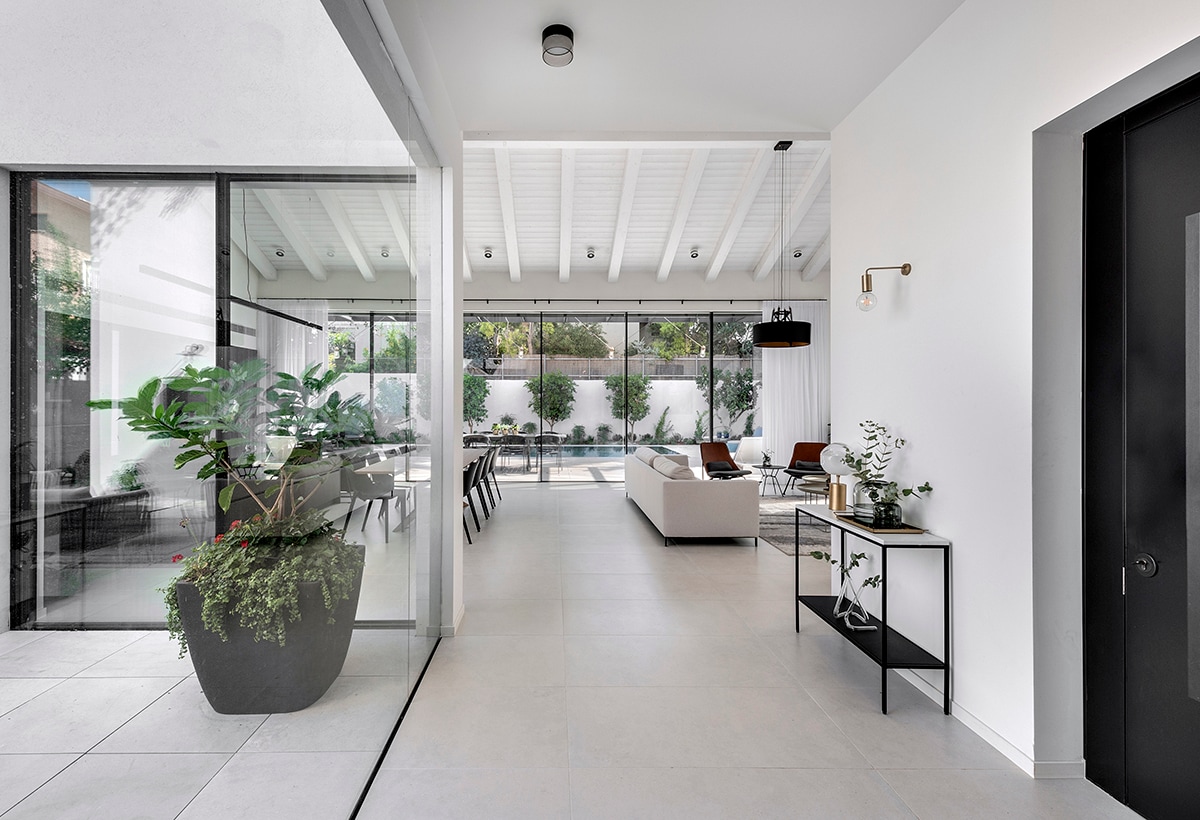 5
The large glazed patio that functions as a joint, offering a visual perspective between the two wings of the residence.

The glass front facing the internal terrace closes to the north with a wall supporting tall, dark kitchen cabinets in black graphite that conceal the built-in refrigerator and oven from view; and to the south, where a wall clad in thin slabs of fumé stone presents the figure of the fireplace and the television, as the backdrop for the conversation area. The kitchen, custom-made by the Italian company Modulnova, is completed with an island four meters long for the cooktop and the stone sink, set into a black basalt surface, while at the center of the space a large dining table in pale wood is placed parallel, ready to become a protagonist of convivial moments. These three fluid islands, which interpret the theme of indoor-outdoor crossing without actual barriers, represent the prelude to the research on relations and connections conducted by the designer and then developed in a narrative sequence of other episodes, with the same neutral palette, almost monochromatic in its chiaroscuro effects that offer great tactile variety at the level of use of materials.

“
I have had the privilege of working on a home for special people, and the commitment has been as great as the satisfaction of creating a space that will allow the family to cope with a complicated situation."

The ground floor is completed by the insertion of a studio space, a ‘glam’ bathroom for guests, and the personal spaces of the parents, including a spacious bedroom zone, a small salon and an independent cooking corner. The Perriand-like modernism of Geffen meets other stylistic details that make the difference in this area. Delicate powder pink curtains frame the large windows facing the garden, creating an even more sophisticated, relaxing atmosphere. A make-up corner creates a feminine punctuation in the space of the wardrobe, featuring sliding cabinets finished in glass in the same ivory color as the walls. Black schist and Cor-ten facings in the master bath underscore, by contrast, the sinuous figure of the free-standing white corian bathtub with its contemporary design.

“
To amplify the outdoor views in the domestic landscape, taking in a precious swimming pool with a hydromassage tub lined in green stone from Guatemala, the interiors are balanced with well-placed voids and transparencies, permeable to the gaze and the natural light."

An essential staircase in darkened oak, like the floors, is placed next to the elevator for connection to the children’s rooms on the uppermost level. Their spaces have been designed as true suites on two floors, joined by other internal stairs in metal and wood. The upper level contains the bed, desk and bookcase, while the space below hosts the bathroom and a zone for spending time with friends. Here the mood of the interior design changes abruptly. The spaces become more colorful, playful and welcoming. Other areas of interest for the kids are placed in the semi-basement, which contains a home entertainment center, a bomb shelter and other service spaces. Upstairs, each child has an individual, comfortable and peaceful environment.