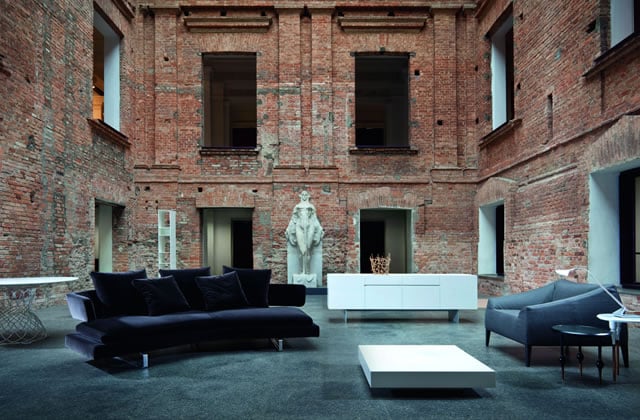 Design hits the stage in the oldest museum in São Paulo. Divans, chairs, lamps and tables enter the human-scale rooms of the Pinacoteca do Estado, a former high school, whose rigorous spaces offer an extraordinary setting for the international flair of design Made in Italy.

Paulo Mendes da Rocha, born in 1928, winner of the Pritzker Prize in 2006, is an outstanding figure on the Brazilian scene.

While Oscar Niemeyer embodies the vitality and sensuality of the Carioca nature, Mendes represents the other side of Brazilian culture, with roots in São Paulo, pursuing a more rigorous, essential modernism. With frequent use of exposed concrete, and daring structures, as in his most famous work, the Brazilian Sculpture Museum built in São Paulo in 1988, like a gigantic beam spanning a space of over 60 meters. The building that contains the Pinacoteca do Estado, again in São Paulo, was opened in 1905 and contained the high school “de Artes y Ofícios”. This was a private education association, and at the time, to show the collection of 26 paintings by Brazilian artists from the 19th century, a single room on the third floor was sufficient. Almost one century later, in 1994, a heritage of over 8000 works imposed a radical rethinking of the building. Mendes da Rocha intervened as an architect, not a restorer, transforming the physiognomy of the old rooms and making the courtyards into large exhibition spaces. Inside and outside, he follows the same clear principle: the old brick walls are literally stripped and displayed with all their powerful materic character, in an operation similar to the one conducted by David Chipperfield for the Neues Museum in Berlin. A winning strategy honored in 2000 by the Mies Van der Rohe Prize for Latin America. The old building has thus been transformed into a fascinating setting, a loft of sturdy, worn bricks, where the 19th-century architecture loses its retro look and takes on the atmosphere of a salvaged ruin, a relic stripped down and reutilized “as found”. The new focal points of the exhibit itinerary, the courtyards, become internal patios covered with light skylights in glass and white steel. Staircases, suspended walkways and divider panels cross the spaces like sculptural inserts in Cor-ten steel. (Alessandro Rocca)