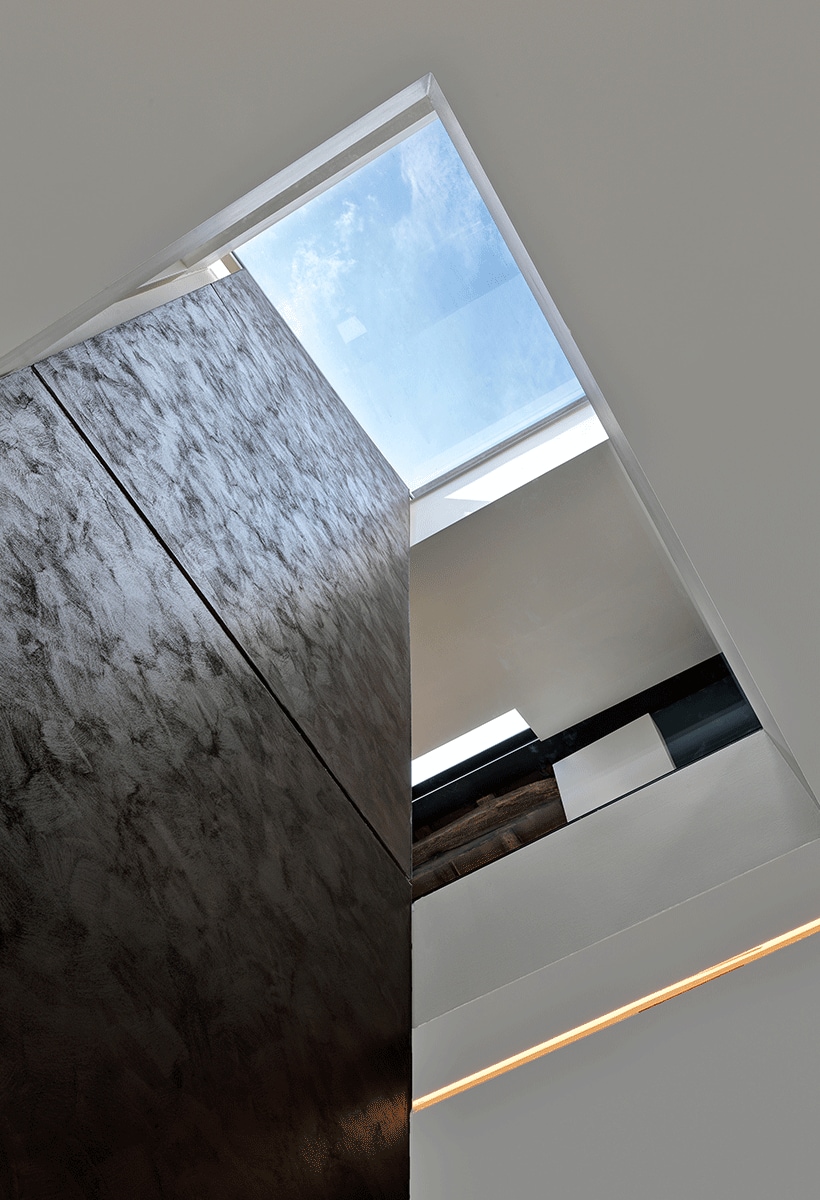 #architecture
Abstract paintings
In a town in the Lomellina region, a bespoke residential project rediscovers the historical traces of a familiar place, updated in a contemporary, experimental way with great skill and know-how

“Chicco is one of my six siblings. Designing his house was a bit like rewinding the tape of memories in the place where we grew up, an 18th-century building in the Lomellina area, with a courtyard scented by white roses, a flight of stone steps from the early 1900s, large communicating rooms with garden views, now split into four separate apartments: one for Chicco, others for our mother, Alberto – on which I worked in the past – and Chicca, in progress; practically a stacked family,” says Michele Cazzani, founder in 2006 with his partners Paolo Armato and Damiano Deiraghi of Archizero, the Novara-based studio that works on the cutting edge of research applied to materials in architecture and design.

This project, selected for the exhibition organized by the magazine Platform for the production of the book Best Italian Interior Design 2018 presented at the Milan Triennale, does not just convey the tailor-made dimension of an experimental workshop that is a constant in the work of Archizero, with which Interni collaborated for the creation of the event Hybrid Architecture & Design during the FuoriSalone in 2013.

The project has an emotional side, of personal memory, that is revealed in even the smallest details. “As usual, the starting point was to listen to the space,” Cazzani continues, “and the aim was to bring out its most authentic spirit. In the presumption and humility of interpreting it and respecting it, I have left visible traces of the past, materials, stones, bricks that become scattered presences, expanding to find new images, the broken casement of a door… all factors that speak of the historical roots of the site.

“
As usual, the starting point was to listen to the space" 4
Photo: Matteo Piazza - Overall view of the living area. Credenza in Calacatta marble, Canaletto walnut and brass inserts, designed by Michele Cazzani and produced by Elements 53 in collaboration with Franchiumbertomarmi (responsible for all the works in marble). Utrecht chair designed by Rietveld in 1935 and produced by Cassina, in the limited edition 2016 with fabric created by the artist Bertjan Pot. Snake table by Meritalia, designed by Carlo Contin, 2006. Gan Abstract carpet by Charlotte Lancelot from 2012. Painting by Franco Fasulo.

Then, after having discussed functional issues with Chicco and his wife, and having understood their taste for the peaceful silence of Japanese architecture, I tried to use forms, materials and colors, with their vibrations, in the living space developed on three levels. The decidedly modern lines of the composition, developed along two main axes, the central one that generates the new geometries, and the vertical axis, the fulcrum and red thread of the narrative, have provided the medium for a dialogue between old and new, a mutual enhancement of the parts.

In the contrast between strong solids and lightness, the project was more about removing than about adding; to connect the spaces, to open windows in the wall creating a frame towards the center of the vertical volume, to adjust the relationship between full and empty zones, to rediscover the balance of opposites. I have focused on natural materials (wood, stone, concrete, exposed brick, iron) and earthy tones. And I have relied on light, the true protagonist of the house. Large skylights illuminate the vertical surfaces, enhancing their imperfections. But the most important material is represented by the craftsmen and technicians who have responded to and improved my visions. Without their help and my willingness to be challenged these results could not have been achieved.”

From the entrance on the ground level, which was previously an open courtyard, one enters a vestibule from which there is immediately a glimpse of the sky thanks to two skylights cut into the slabs. From this level the staircase develops, crossing the whole house, providing orientation for the addition of other architectural elements, like the box of the bathroom or the divider partition in the attic. 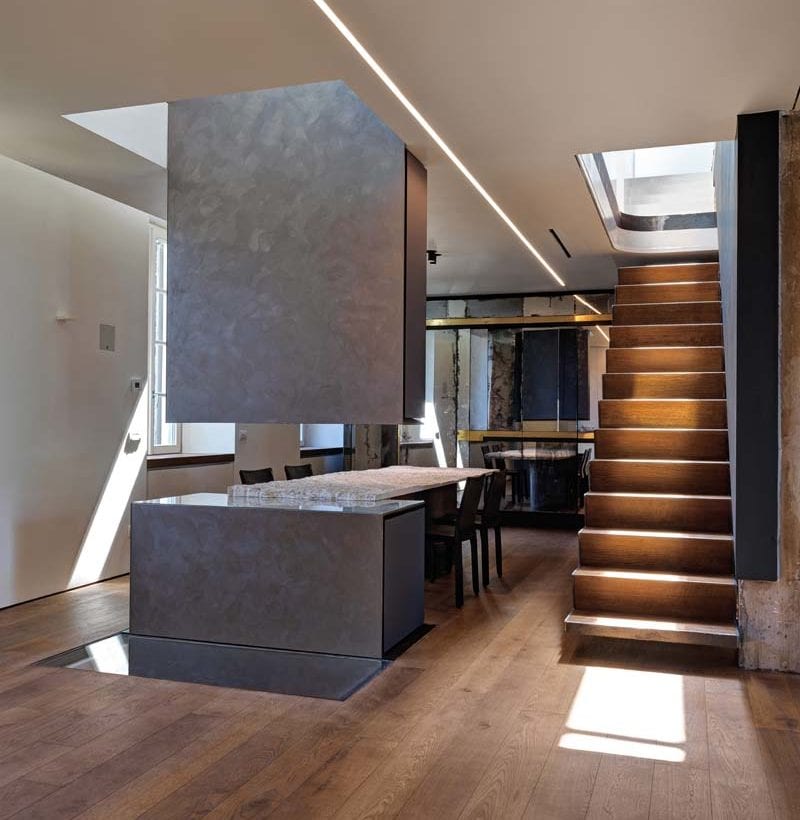 4
Photo: Matteo Piazza - The suspended staircase in iron and wood made by the craftsman Francesco Contiero in collaboration with the Arbusta woodworking shop. The dining chairs are the Cab model designed by Mario Bellini in 1977 for Cassina.

The first floor has been set aside for the living area: a single space where a large sliding glass door expands the perception towards the outside, while a portion of the original wall, deprived of its function, remains as a symbol of the constant communication between past and present. The new vanishing kitchen, composed of antique-effect mirrors, brass, wood and stone, becomes a captivating abstract painting in the domestic landscape, in which the various parts are reflected and distorted.

Every part is indispensable for an understanding of the whole. Like the table top made with a scrap of white Verona marble, embodying the almost primordial force of the material in its erosions. Or the architectural cabinet in brass that functions as a stand for the TV, recouping the marvelous wooden floor from the early 1900s as a backdrop for a dining room revised along vertical lines, like a carpet that extends up to the ceiling.

There is also a washstand made by Franchiumbertomarmi, conceived as a fusion between water and fine Calacatta marble in a single sculptural piece. On the upper level, corresponding to the mezzanine and the attic, the nighttime zone is formed by two large bedrooms with their own bathrooms (one featuring teak flooring with rubber joints), the wardrobe and a space for relaxation.

In the latter, one finds another interesting surprise: the presence of a ‘carpet’ of glass that interrupts the micro-cement surface of the floor to allow the multiple colors of the staircase from the apartment below to enter. “The light from the skylight, built in the early 1900s to brighten the stairwell of the undivided dwelling,” the designer says, “continues to play its role.

Furthermore, today there is also a subtle divertissement: during the evening, when our mother turns on the lights in her apartment, the floor in Chicco’s house starts to glow.” The construction required four years. “We could have gone on and on,” the architect says, “but we had to finish, since there was a crane at the house. The neighbors are very tolerant, but they were starting to get impatient.” 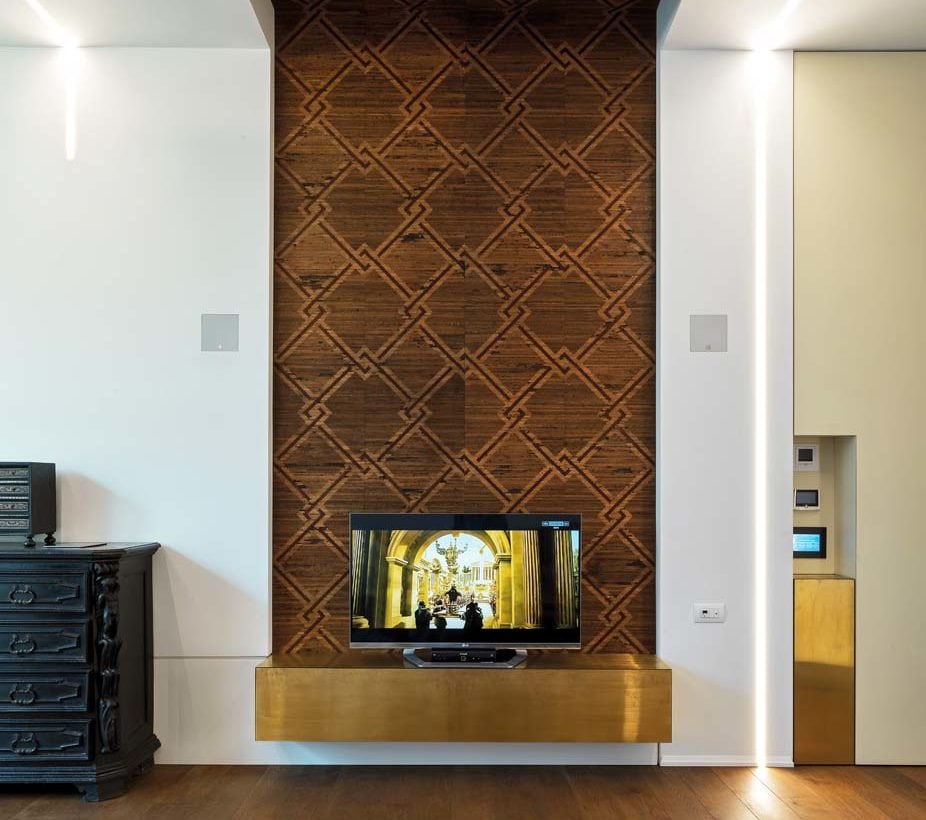 4
Photo: Matteo Piazza - detail of the wall-backdrop made with salvaged wood flooring from the early 1900s, formed by strips of different types of wood mounted on carpeting. Custom brass cabinet produced by the Arbusta woodworking shop.
#Design #Projects #architecture